Southern Indiana may not resemble Silicon Valley, but tucked away off Bell Road in Newburgh, Indiana, an engineering company is affecting the technology world in a big way.

Ciholas, Inc., is a small business that works to provide companies with technology they need to go farther in their industries or solve a problem they may have.

“Our tag line is ‘We fill the gap from chip to app,’” says president and company founder Mike Ciholas. “We’re mostly a contract engineering company. That means people hire us to invent things for them.”

Ciholas moved to southern Indiana in 1995 when his wife Dr. Deborah Hwang accepted a position at the University of Evansville (where she still serves as an associate professor of computer science). As an independent consultant, Ciholas worked out of his home, engineering and working on projects before demand allowed him to hire his first employee in 1999. Twenty years later, his company now boasts 40 employees in an energy-efficient, 35,000-square-foot facility custom designed by Ciholas himself. 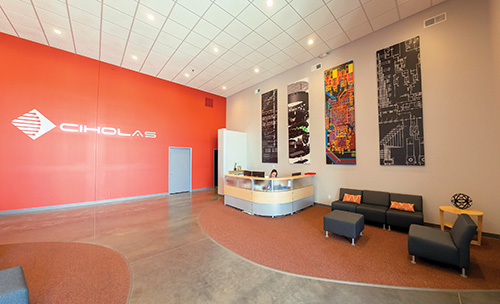 What does the company do in its sophisticated building? Engineering and invention, says Ciholas. Other companies come to the business to craft devices and programs to accomplish goals. One of the biggest developments for Ciholas, Inc. is location systems using ultra-wideband radio technology — in fact, the company is a worldwide leader of the tech.

“It’s like indoor GPS, which means we can locate things within 1 inch or 2 anywhere inside a building,” says Ciholas. “We have a number of patents and inventions around that, which we license. We do that for things like warehousing material, forklifts, and tracking athletes and drones.”

Many of their projects are confidential, but one that is not is the Museum of the Bible in Washington, D.C. Opened in November 2017, the seven-floor museum utilizes the location systems in its digital guide — a tablet device patrons of the museum carry with them.

“What’s special about it is it uses the location technology we invented, which will tell you not only where you are in the museum, but also which way you are looking. Therefore it can give you location-aware content,” says Ciholas.

The device not only provides content on displays and guided tours, but their use also allows data to be gathered for the museum.

“If it is crowded in one area, it can basically re-route you around the museum to help balance the crowd,” says Ciholas. “Also we can do analytics — for example, we can take the date of where people go and you can figure out from all these numbers how well your exhibit is working.”

For Ciholas and his staff, the Museum of the Bible is just one instance of how rewarding their work can be. While some engineers may spend years working on the same project, Ciholas, Inc. tackles new jobs that often have aspects new to the engineers.

“That means we always are being challenged, always having to think of something new,” he says. “Here, it’s not predictable. The fundamental thing about the company is we’re inventing new things every single day.”