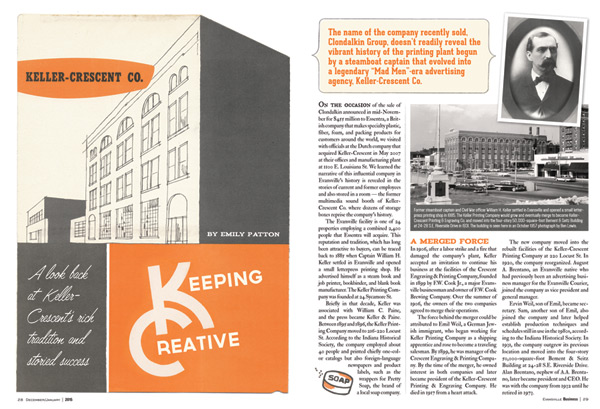 Essentra, formerly known as Keller-Crescent Co. — a printing plant begun by a steamboat captain that evolved into a legendary advertising agency — announced its doors would close permanently in November.

The packaging manufacturer reached the decision in May that the E. Louisiana Street facility will close 130 years after it opened in Evansville, due to an unnecessary amount of Essentra plants in the region. Closing the plant will eliminate 150 full-time jobs. The company purchased the plant and 23 others from Clondalkin, a Dutch company, for $455 million in November 2014.

The facility’s rich history recently was featured in the story “Keeping Creative” in the December/January 2015 issue of Evansville Business.

Kay Koob, a key part of this rich history, says she is saddened by the news of the closing. Koob was the first female vice president at Keller-Crescent in the late 1970s and describes the atmosphere at the business in “her day” as extremely lively, busy, hectic, and wonderful.

“It was a very sad day for all of us who got our starts there,” says Koob of Newburgh, Indiana. “We were all a very solid part of the community. We were very much believers in community and activity and service. The Keller-Crescent that I knew has been gone for a long time but it’s still a very sad event for us — and the city, too.”

Evansville native Dave Painter started as an account executive trainee at Keller-Crescent in 1972 after he graduated from the University of Evansville. In just eight short years, he achieved the position of vice president account supervisor, the second youngest to hold the position.

Painter, now retired and working part-time at Napa Auto Parts in Newburgh, left Keller-Crescent in 1989, but still kept tabs on the company because of his positive experience working where he says he realized his dream.

“When I heard the news, I felt sad for not only this community, but also the individuals who were employed there,” says Painter. “It’s hard to see what was once one of the greatest companies in Evansville come to this end.”