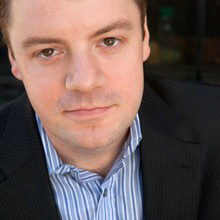 Since graduating from the University of Evansville and moving to New York City in 2003, freelance director and co-owner of Slant Theatre Project Wes Grantom has remained close with John David Lutz, director of theatre at UE. Lutz, who taught Grantom how to direct, has continued mentoring him from a distance, and the pair expressed joint interest in Grantom returning to direct at his alma mater.

April 13-22 will see Grantom’s homecoming as director of seven performances of George S. Kaufman and Moss Hart’s Once in a Lifetime, a lighthearted comedy that quickly rose in popularity after its first production in 1930. “It worked out this year that they wanted to do a really big show with a large cast,” Grantom says. (The play features 36 cast members.) “And I was really excited about directing Once in a Lifetime, and the scheduling all worked out.”

Grantom spent his first two years at UE as a performance major, involved with theater production mainly as an actor. During the second semester of his junior year, however, he made the transition to directing and immediately found his true calling. As he transitioned from the role of assistant to taking on greater responsibilities, he fostered a passion for directing which led him to New York City. As a freelancer, Grantom has directed more than 20 plays, held numerous assistant-directing jobs, and been involved with several theater production affiliations.

Once in a Lifetime brings Grantom back to Evansville in part because of its writers — two of his favorites. “I’m a big fan of Kaufman and Hart,” he says. “They only wrote a handful of plays together, but they’re comedic geniuses, with the wordplay and the witticism, and the heart at the center of their plays.”

The play centers around the demise of the golden age of silent movies and the advent of the even more golden era of “talkies.” While comedic and somewhat satirical on the surface, it’s the connection with the industry that fascinates Grantom. “In a lot of ways, it’s a love letter to the performing arts,” he says. “I’m excited about doing it with all these young actors at U of E who are about to go and try to be professional artists themselves.”

Grantom has already been in touch with faculty members and several UE alumni who will be coming to the production, including TV star Jack McBrayer. “It’s very exciting that we’re getting down to the wire,” he says. “But it will be a very busy time, as well.”