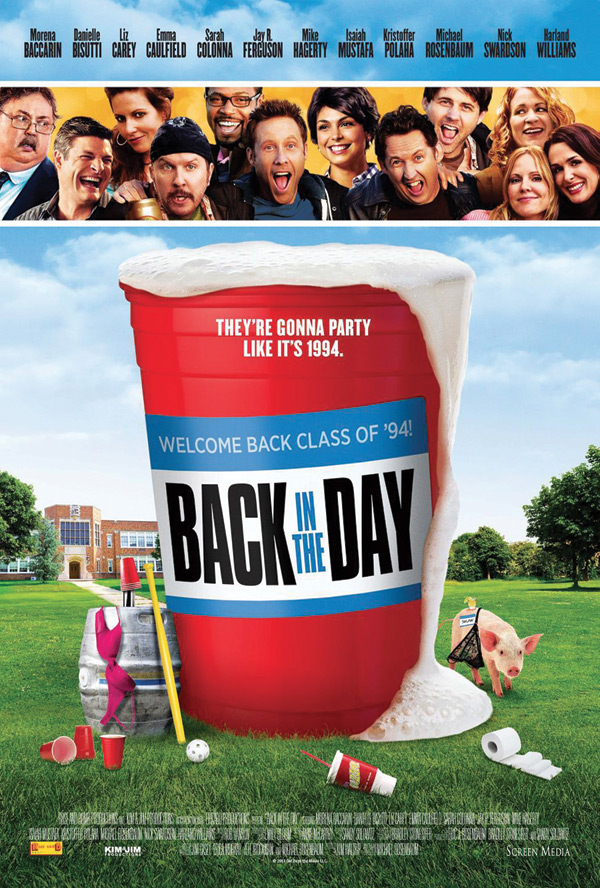 Michael Rosenbaum’s high school experience wasn’t what you might expect from the star of the television show “Smallville.”

A graduate of Castle High School in Newburgh, Ind., Rosenbaum, 41, says he wasn’t popular in high school, didn’t go on a lot of dates, and was the smallest kid in the building. Recently, he had the chance to go back and be what he never could be.

“This character is supposed to have played football,” Rosenbaum says. “In moviemaking, you can be whoever you want to be. It was magical.”

Rosenbaum’s feature film directorial debut, “Back in the Day,” is shot in his hometown and takes main character Jim Owens (Rosenbaum) back to his 15-year high school reunion after an unsatisfying career in Hollywood. The characters in the movie cruise Green River Road in Evansville, boogie at Castle High School, and dine at Pizza King in Newburgh.

Rosenbaum wrote the script for “Back in the Day” 10 years ago, and he says it somewhat mirrors his life.

“The story really reflects on me a lot,” says Rosenbaum. “The hostile grind of Los Angeles and everyone wanting to be an actor and succeed in the business and you get tired of all that. No one really cares about that back home.”

But it wasn’t until a movie he was working on in November 2012 lost half of its funding that he finally put his plans into action.

“I felt like I let everyone down,” Rosenbaum says. “I’m not going to let this happen again. I picked up right where I left off and changed gears. It was a blessing in disguise. If I never do another movie, I got to shoot in my hometown — that is an accomplishment.”

A month after the other project collapsed, Rosenbaum flew to Evansville, where his mother and sister still live, to see if his long-lost script could be produced and began prepping the movie in February 2013.

Rosenbaum enlisted the help of several locals, including University of Southern Indiana senior Spencer Paddock, who served as the film’s photographer. The 21-year-old Paddock was responsible for all the photography on the set, posters, advertising, and pictures used by the media. In the 22 days it took to shoot the movie, Paddock recorded more than 22,000 photos.

“I went into it kind of scared, not knowing what it would be like,” says Paddock, who was one of 46 members of the cast and crew from the Evansville area. (Read more about the local production crew in the September/October 2012 issue of Evansville Living, which featured Rosenbaum on the cover for a story titled “Wind, Reel, and Print.”)

“You hear a lot of talk about how people from L.A. are hard to work with, but everyone was so down to earth,” Paddock says. “You have all these people that turn into your family.”

In early January, “Back in the Day” was released to video on demand (VOD) and Newburgh and Evansville theaters. It hit theaters nationwide on Jan. 17.

For more information on “Back in the Day,” visit facebook.com/backinthedaymovie or follow the movie on Twitter at twitter.com/BITDthemovie.