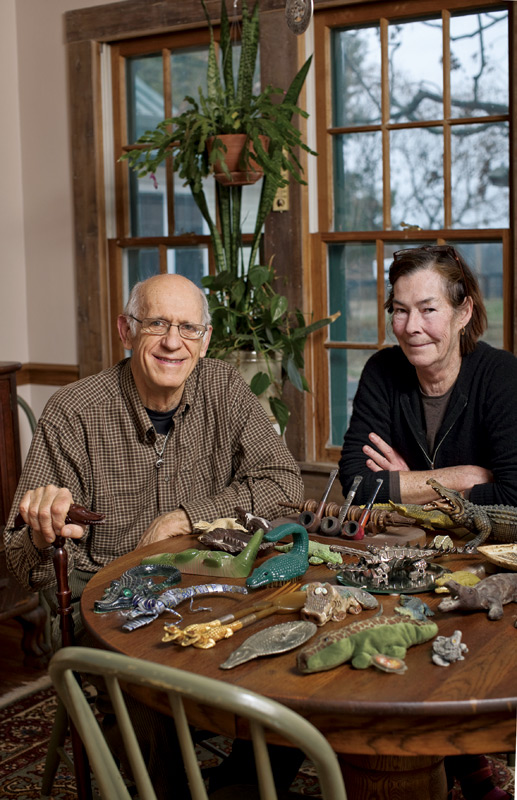 In 1981, Don and Breeze Sobek elbowed their way through a crowded flea market in Paris, France. They shopped aimlessly until they found a three-foot African rosewood crocodile. Such an item had intrigued Don ever since a friend had visited Egypt and found Kom Ombo, a temple honoring Sobek, the Egyptian god of crocodiles. Don Sobek, though? No relation. His last name is Czech, but the similar names enticed Don and Breeze to collect all things crocodile.

Thirty years and 300 crocodile items later, the Sobeks’ home in Mount Vernon, Ind., displays a collection so impressive that the god Sobek may think it a worthy shrine. The pieces range from crocodile-shaped Appalachian folk art to more cartoonish talking cookie jars, crocodile cigarette lighters, tree ornaments, pipes, lights, soaps, bathtub stoppers, clothespins, and chocolates. “Who would even think of these things?” says Breeze. The Sobeks boast a variety, but they have restrictions. The couple’s Posey County property is “a zoo,” Don says, with two horses, two dogs, 13 chickens, 13 cats, and one goat, and these animal lovers refuse to own taxidermy crocodiles and clothes with crocodile leather.

The ancient Egyptians would agree. They revered animals associated with the gods such as Sobek’s crocodiles. Outside Kom Ombo are shallow pools where jewel-adorned crocodiles once waded, and today, mummified crocodiles remain inside the temple. Inside the Sobeks’ home in Southwest Indiana, the couple uses the crocodile-inspired items subtly. In their formal room (which is the original 1823 log cabin that the Sobeks have built their home around) sits crocodile American slave art dating before the Civil War. The décor fits the rustic atmosphere whereas the modern kitchen has more fun bits and pieces such as the colorful crocodile light switch cover and oven mitts. “When I find (a crocodile item),” says Don, “it’s good luck.”