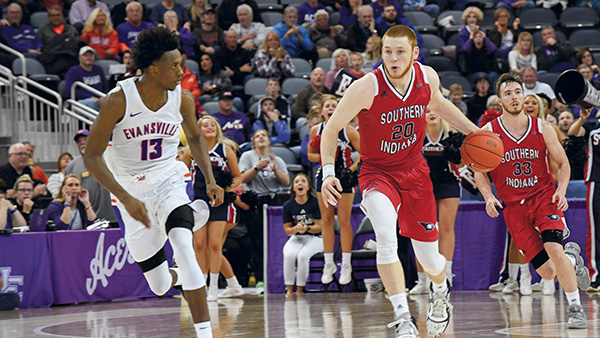 Facing off on the basketball court is not a new tradition for the University of Southern Indiana and the University of Evansville men’s basketball teams. And on Monday, Oct. 28, the two faced off once more on the hardwood at the Ford Center for a non-conference exhibition game.

The matchup was the first of both teams’ pre-season schedule and the lead up for UE Head Coach Walter McCarty’s second season and USI Head Coach Rodney Watson’s 11th season with the teams. Evansville Living talked with both coaches (as well as both universities’ women’s basketball coaches Matt Ruffing and Rick Stein) last year for the November/December 2018 issue in the story “Kings of the Court” about leading the teams and life in Evansville.

The last time the two Evansville universities faced off was in 2012 and in total, the two teams have played only four times previously. The game on Monday proved to be a tough test for both USI and UE.

The Ford Center saw 6,263 fans in attendance for the overtime game where UE defeated USI 71-68. The win keeps up the streak the Aces have against the Screaming Eagles — UE has won the previous four meetings.

“USI is a great team. They fought hard,” says McCarty. “It is going to be a great film session; hopefully our guys accept some coaching and we can move on.”

The 18th-ranked USI Screaming Eagles’ first Great Lakes Valley Conference game of 2019 will be Nov. 8 against Hillsdale College, with their first matchup in the new Screaming Eagles Arena on Nov. 18 against Kentucky Wesleyan College.