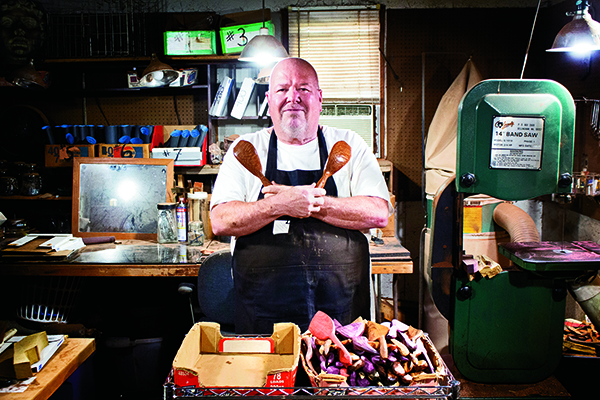 Deep in the small garage workshop behind his Sandborn, Indiana, home in Knox County, you can find Tom O. Reed absorbed in his craft, sanding away on homemade wooden kitchen utensils. But these are no ordinary cooking tools. Each has an artistic flair that resembles an accent piece in any kitchen, yet still provides function as a usable tool.

Reed’s high-quality utensils, from Pudding Ploppers to Peanut Butter Spreaders, are carved and then thoroughly sanded with 3,000 grit sandpaper, leaving a smooth, almost glossy finish. The 17-step process is so particular that Reed doesn’t use domestic woods because he finds them too soft. Most of his pieces come from exotic tropical woods, known for being some of the rarest types of wood in the world, costing up to $150 per board foot.

“It’s a testament to my sanding prowess, if that’s what you call it, but without using these tropical exotic woods, you would never achieve that kind of fine finish,” he says. “The tropical exotic woods have so much more color, character, and grain, plus the added bonus of being so much harder and dense.”

Originally from San Diego, California, Reed worked in the music industry, signing artists to recording contracts. In 1988, he began looking for an occupation more reflective of his creativity, inspired by the idea of working with nature and, specifically, crafting cooking utensils.

Without using templates or tracing devices, Reed enjoys the challenge of shaping each utensil individually and creating something wholly original, with no two pieces looking exactly the same.

“I don’t worry about historical norms,” he says. “That’s the art part. That’s the freedom of being creative, and that’s what I love about my art.”