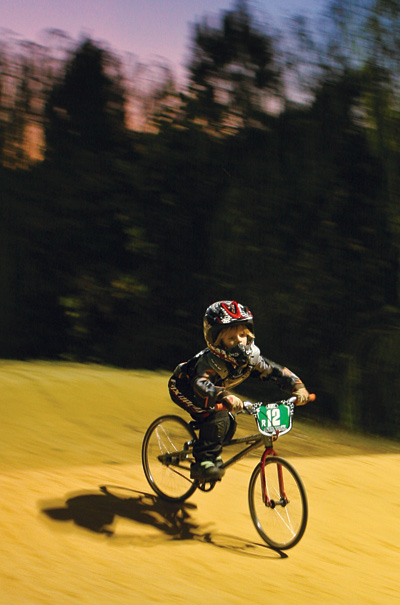 During the week, Angie Almond is an office jockey, but for the past three years, the 49-year-old mother has donned a helmet and padding to hit a dirt track with safety and style. Her adrenaline rush comes from her need for speed. “I just have such a wonderful time doing it,” she says. “It’s great exercise, and it’s a lot of fun.”

Almond was one of 436 bicycle motocross (BMX) racers who wound around the quarter-mile George Mason Burdette Park BMX track on a summer weekend last year. Riders with oversized helmets and bikes with thick tires battled for a national title by clocking speeds more than 30 mph, sprinting around hairpin curves, and launching several feet in the air over dirt hills. This annual competition attracted riders from 24 states and Canada. Their regular participation means each year the event “covers the West Side with BMX people,” says Almond, the co-track director. It’s one of 30 events held at the BMX facility from April to October.

Laura Libs from the Evansville Convention and Visitors Bureau says that the internationally recognized 1977-built track has been a valuable asset in attracting visitors to the community. Libs has George Mason, the founder, to thank for that attraction. “I wanted a place for kids to ride their bikes, and I always wanted to keep them off drugs,” he says. “It was well worth it.” Mason, a former racer, began riding when BMX was a trend. Now, retired from the sport, Mason remembers his races fondly. “I didn’t give up,” he says. “And I tell the racers: Don’t give up until you cross the finish line.” Mason still attends races each season to watch his 13-year-old grandson, his family’s third generation of racers.

His legacy continues with a small group of driven volunteers, including David Gamblin, a parent of a BMX enthusiast and co-track director. Last season, they had 30 races, such as the Battle of the Villes (Louisville, Nashville, and Evansville), an event attracting around 110 racers and hundreds of spectators. Such success is dependent on volunteers. “No one gets paid a penny,” says Gamblin. “You either ride because you love to do it, or you help out because you love to do it.”