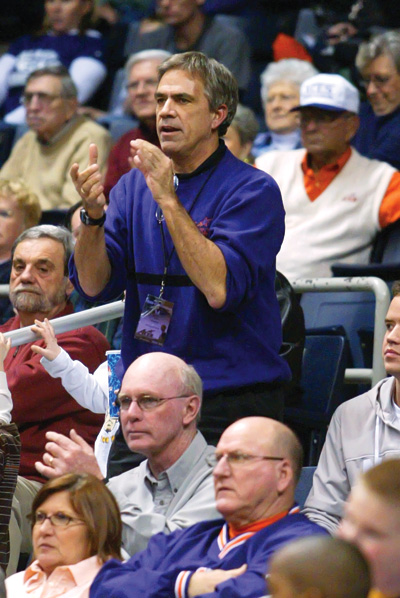 In the 1950s and 1960s, University of Evansville men’s basketball games, held in the new Roberts Stadium, were so popular that husbands and wives fought over season tickets in divorce settlements. For the next five decades, this stadium was the home court of a basketball legacy. It has hosted more than 800 men’s basketball games that showcased Aces talent bound for the NBA: Jerry Sloan, Don Buse, and Ed Smallwood.

By the time John Stanley became UE’s athletic director in 2007, Evansville was entrenched in an argument: What to do with the aging facility? Roberts Stadium had a host of deficiencies and structural problems that Mayor Jonathan Weinzapfel addressed on several occasions: “The concourses and aisles are too narrow. The restrooms aren’t up to code. The HVAC system needs replacing. The stadium isn’t in compliance with the Americans with Disabilities Act.” The solution: Construct a Downtown, multi-purpose venue for athletic events, concerts, and exhibitions.

For Stanley, who grew up around the tradition of UE athletics, the new stadium was welcomed news. He was a diehard fan of the men’s basketball team, a program that had ardent support thanks in part to five championships in the college division (the precursor to Division II). UE basketball was a “leader in sports entertainment in our community,” Stanley says, and today, home games still can “give the community recognition.”

As UE’s athletic director, Stanley should think so, yet the last-place finish in the Division I Missouri Valley Conference by the men’s team in 2010 suggests the recognition needs an upgrade. Still, the team shows signs of improvement: Early in the 2011-2012 season, UE knocked off Butler University, last year’s Division I runner-up.

That’s not the only momentum the team has. In November 2011, UE hosts Indiana University at the first event held in the Downtown arena. Without the new 11,000-seat arena, Evansville never had the draw for IU to visit two hours south of Bloomington, says Stanley. We asked Stanley about the future of UE basketball.

City View: How will the new stadium better UE’s program?
John Stanley: I think that if we’re able to have success as a team and in an environment that people want to go, it will certainly enhance our attendance over time. It also will be appealing to recruits. So many of our competitors are playing in new venues, so now with our new arena, we will be able to stay up with the curve when it comes to facilities where we can play.

CV: Was there a reason to host IU specifically once plans for the new arena were underway?
JS: In scheduling, we attempt to host and play games that the community will enjoy. With the new arena, we couldn’t find any other teams to fit that mold better than IU. We thought it would be a very attractive matchup that people would come to, and that it would make a positive outcome for everyone involved. We put together a deal that makes everyone happy, which should be an objective, and that was the direction we went.[pagebreak]

CV: What are some challenges you face as athletic director?
JS: Here’s a list of 10 accountabilities I may deal with on a daily basis: fans, sponsors, donors, players, parents, NCAA, Missouri Valley Conference, the media, the faculty, trustees of the university, and others. It really makes it quite a puzzle to put together to keep things going and working for a good program.

CV: What’s your motivation?
JS: All aspects of this job make me motivated on a daily basis. I look forward to figuring out how we can improve our teams, and how we can make our student-athletes better people. Although I find it very challenging to make sure it’s a successful transition to the stadium, I’m grateful there are so many people who are willing to assist in making sure it’s fun for our fans and nice for our community.

CV: While basketball may be in the spotlight, what other UE sports get you excited?
JS: I don’t think we have a sport here that I don’t totally enjoy. We have 250-plus athletes, and I know a lot of them. It’s almost like, at some point, watching your own child play in competition. For me, going to an Aces athletic event at the end of the day is like having dessert — I look forward to it every time.