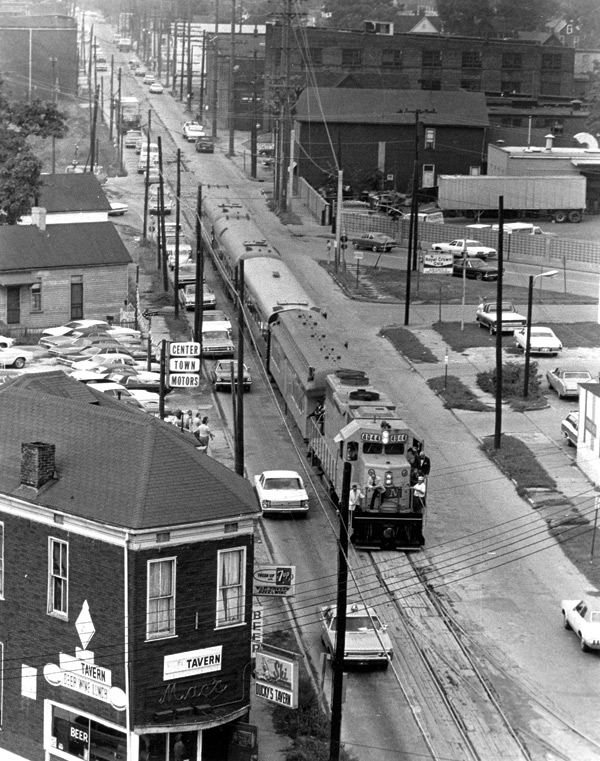 The four-car train rolled slowly along Division Street, carrying Mayor Russell Lloyd and former Mayor Frank McDonald among its 130 passengers. It was the culmination of a decade-long effort to reroute freight trains around the city, with the opening of a new bypass.

For nearly a century, the railroad tracks that ran down the middle of Division Street created a traffic nightmare. Trains of up to 140 cars rolled along the line, creating a virtual wall through the city about a dozen times a day.

“The Division Street tracks have plagued the city as long as anyone can remember,” Lloyd told the Evansville Press. “Now we’re looking forward to getting the tracks removed.”

The tracks had been put in place to connect the Chicago & Eastern Illinois Railroad — which had a Downtown depot — to the Louisville & Nashville’s depot on Fulton Avenue.

As mayor, McDonald led the push to use former New York Central tracks along with 2.6 miles of new rail to take the trains to the north. The bypass officially opened on July 31, 1973, with the “Last Train Down Division Street.” Don Goodaker snapped this photo as the train approached North Main Street.

The train was cobbled together from what little passenger equipment the L&N had left. By 1973, it had just one passenger route remaining, and that didn’t include Evansville. With Mayor Lloyd at the throttle of locomotive 4044 for part of the way, the trip concluded with the first ride over the new bypass.
It wasn’t really the last train to use the rails, which remained in place until 1983, when they were finally scrapped during construction of the Lloyd Expressway. But it marked the end of an era, as only short local trains used the tracks afterward.