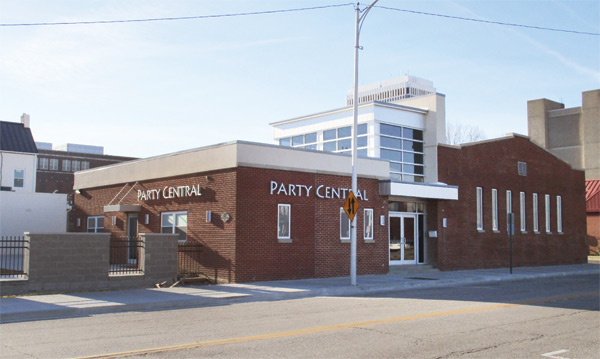 When Skip Seaman and Dillip Patel met an appraiser to assess the building on the corner of Martin Luther King Jr. Boulevard and Vine Street, they were told its best use was a parking lot.

Ignoring the advice, the two partners dove head first into restoring the former Catholic women’s organization Daughters of Isabella building with a vision for a party and event rental facility. In December 2015, the 1920s structure opened completely remodeled as Party Central with a banquet hall, foyer, bathrooms, a warming kitchen, a taproom machine, an outdoor patio, and ample parking.

The idea for Party Central came to life when Patel struggled to find a venue for his daughter’s wedding reception. When the building and the restaurant next door, which was the former Food With Flair restaurant, became available, the pair decided to create their own. They hope to lease the building next door to a new restaurant owner.

“Many places wouldn’t let me bring my own food and had high prices for theirs,” says Patel, who also owns The Carousel Restaurant. “When I walked through the building, it was surrounded by all these corporate spots and I thought it would be the perfect place.”

The facility has more than 3,900 square feet of space with a capacity of nearly 300. The venue is available for wedding receptions, political parties, family reunions, holiday office parties, corporate events, bridal and baby showers, and more. In December, Party Central hosted its first event, a company Christmas party for LawMan Security & Consulting.

“Dillip is the genius behind what we do. I invest in the ideas,” says Seaman, who has a background in marketing for Anheuser-Busch. “This place looked horrible. The place next door was even worse. He said, ‘This is going to be perfect.’”

The two owners met at a Christmas party in 2007, and own eight Liquor Lockers together.

“We are like the yin and yang,” says Seaman, a longtime Evansville resident who has owned Product Acceptance & Research (PAR) for 25 years. “We have such a good match of talent sets. When you put the two together, it’s like an unbreakable bond.”

For more information about Party Central, call 812-459-8360 or visit partycentral.rentals.