The complaints of residents saying there is nothing to do and nowhere to go have all but gone away. The almost audible groans of business owners under the weight of former administrations’ development decisions are but a murmur. The sound of shoppers’ exodus out of Downtown is no more. Instead, if you listen closely, you can hear the sound of progress.

“Downtown is growing so quickly, you might be able to hear it,” says Department of Metropolitan Development (DMD) Executive Director Kelley Coures, adding the area currently has about $380 million in renovations simultaneously occurring — an unprecedented amount even for modern times.

Evansville’s Downtown certainly is booming, with renovations and new construction happening nearly everywhere you look. Coures says 24 new businesses have opened in the heart of the city, bringing a momentum and leading the way for new ventures and entrepreneurs.

“We’ve got the beginning of a small business retail renaissance,” says Coures. “What you see is the rebirth of retail. Retail follows progress and rooftops.”

Coures’s boss Evansville Mayor Lloyd Winnecke says while the city has done its part to revive Downtown, he is most proud of the private investors getting involved.

“It tells me developers believe our Downtown is on the move, that they can make a return on their investment, which is a great sign of confidence in our city,” he says, adding that the growth Downtown is having an effect in other parts of Evansville. “When downtowns thrive, other parts of the city grow as well and become vibrant. 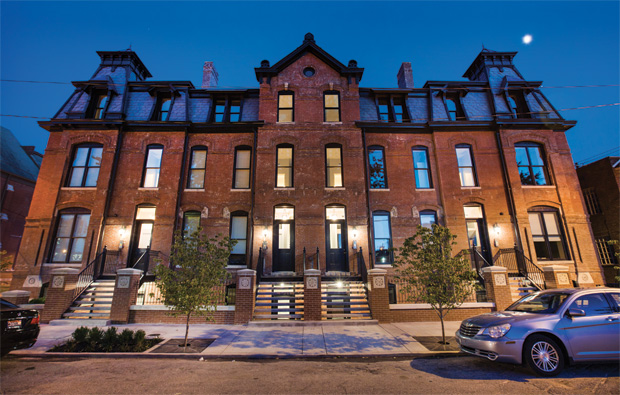 The City of Evansville, Architectural Renovators LLC, and Indiana Landmarks teamed up to take this building from rundown to revived. While the city issued a raze order on the 19th-century rowhouse built in 1882, the Winnecke administration and DMD pledged $100,000 toward Owen Block’s stabilization. With additional funds raised by Indiana Landmarks, Architectural Renovators transformed the building into 15 one-bedroom apartments. The community gathered Aug. 5, 2016, for the ribbon-cutting and tours of the property.

In the summer of 2015, Penny Nejad, owner of Café Arazu in Newburgh, Indiana, purchased the former The Jungle restaurant. Plans were to create a second location similar to the café in Newburgh, but with different menu options. Arazu on Main opened its doors to the public in November 2016. Both the exterior and interior of the historic building received extensive renovations, including a new neon sign outside the building, paying homage to The Jungle. 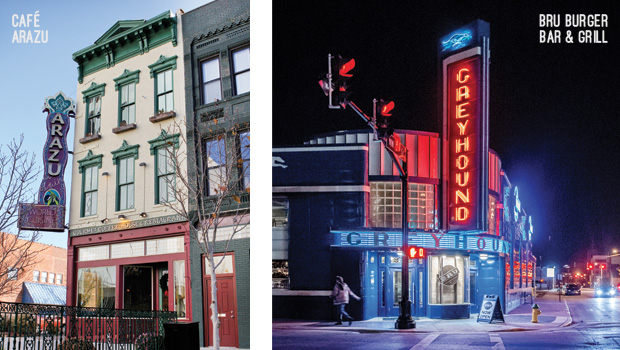 After a few stumbling blocks, the $71.4- million DoubleTree Hilton Hotel — located adjacent to The Ford Center — broke ground in March 2014 with plans to open the structure by January 2017. The Downtown hotel features 241 guest rooms and a full-service restaurant and lounge, and is being built by lead contractor Hunt Construction. The DoubleTree also provides 12,000 square feet of event space to help attract convention-goers back to Evansville, which has been without a true convention hotel.

When YMCA of Southwestern Indiana received a $5-million share of the city’s Regional Cities Initiative award, it marked the beginning of big changes for the Downtown YMCA campus. The organization is planning construction of a new health and wellness facility on the parking lot facing Court Street. The former YMCA residential building is to be converted into one- and two-bedroom, income-based housing units. Private developer AP Development is to provide $15 million for the renovations, while the YMCA will raise another $5 million to be used with Regional Cities Initiative funds to create the new health and wellness facility. 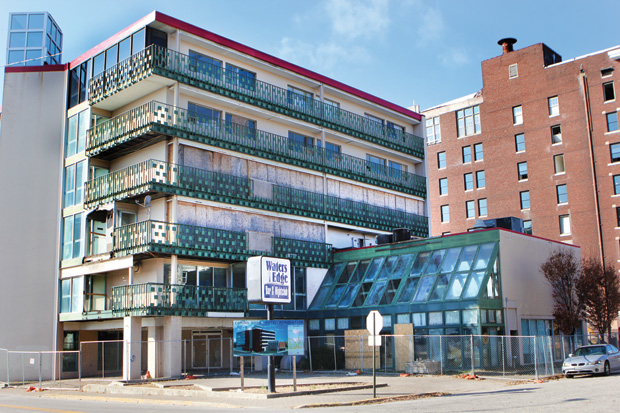 A few years and many plans culminated with the demolition of the annex and skywalk of the former Riverhouse Hotel along Walnut Street. The order from the city came in June 2016 to have the structures razed, which was completed in late August. The fate of the main hotel building still remains in limbo. According to Coures, property owner George Yerolemou says he has a signed franchise agreement with a large hotel chain, but hasn’t yet disclosed specifics. 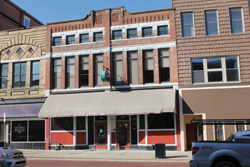 The building at 518-520 Main St. has seen more than a few restaurants occupy its space over the years. Now, it may be set to welcome a Korean eatery. Formerly the Uptown Event Restaurant, the property was sold in August 2016 to Joseph Kim, who previously was involved with Ninki’s Japanese Bistro in Newburgh, Indiana. Plans were to convert the space into Gangnam Korean Cuisine restaurant. He has not set an official opening date. Before Uptown Event operated in the building, Main Gate Bar and Grill called the space home. 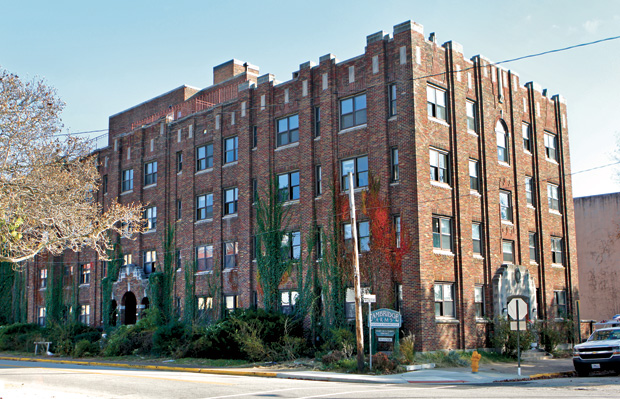 In October 2016, work began on the Cambridge Arms apartment building, converting it into 32 new one-bedroom apartments and a penthouse suite, funded by private developers. The exterior of the structure features an art deco-style popular in the 1920s and 30s. Architectural Renovators LLC is working as the lead contractor on the project, beginning with the interior of the historic building. Construction is expected to wrap up fall 2017. 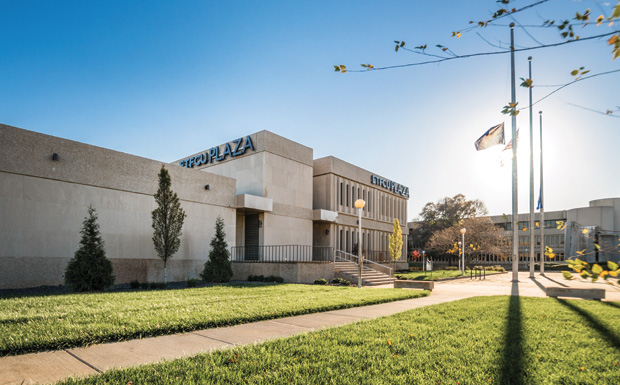 The Evansville Teachers Federal Credit Union Plaza makes up one-third of the city and county government campus Downtown. In 2015, Scott Danks and the group Professional Plaza LLC developed the property from a vacant school corporation building. The property contains two floors and a lower level, as well as its own parking lot. Currently Danks & Danks law office and a branch of Evansville Teachers Federal Credit Union have office spaces in the building. The rest of the units are available for tenants to build out.

This building was designed by architect W.E. Russ and completed in 1917, about the same time the McCurdy Hotel was finished. According to Coures, brothers Robert and Steve Barber plan to renovate the Cadick into six luxury apartments. Construction is currently underway with completion set for spring 2017. 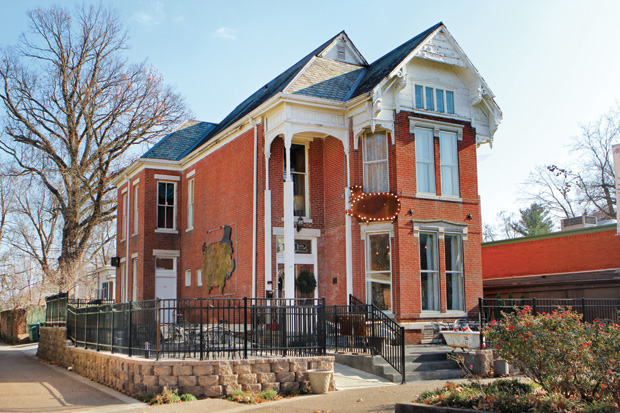 When Skip Seaman and Dillip Patel looked at the former Daughters of Isabella building on the corner of Martin Luther King Jr. Blvd. and Vine Street, they saw a chance to bring an event-rental facility to Downtown. The 3,915-square-foot, completely remodeled space opened in late 2015 and can house up to 279 guests. It also includes a warming kitchen, taproom machine, and an outdoor patio.

Property at Locust Street between Fifth and Sixth streets 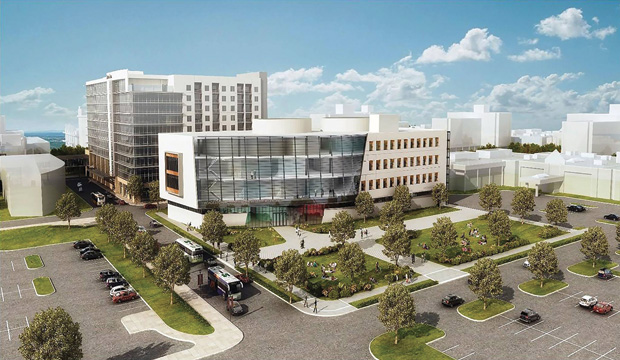 Set to be the new home of the Indiana University School of Medicine-Evansville program, the Evansville Multi-Institutional Academic Health Science Education and Research Campus will cover roughly 140,000 square feet of Downtown. Contractor Skanska USA Civil broke ground on the $61-million facility Oct. 23, 2015, with completion set for 2018. The building also will house programs from IU School of Dentistry, the University of Evansville, and the University of Southern Indiana. 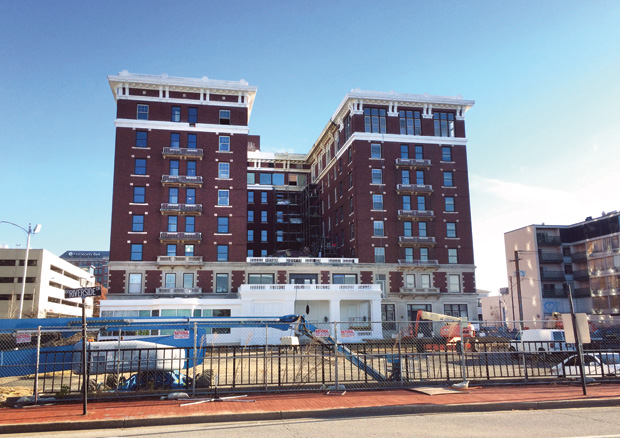 Odyssey Construction is making progress on the $12-million renovation of the former McCurdy Hotel building, owned by the Kunkel Group. Odyssey Construction has restored original ornamental features and brought the former hotel into the 21st century. While commercial spaces will occupy the ground floor, more than 100 modern one- and two-bedroom apartments — starting at $725 — should be available to rent in February 2017.

Danco Construction Inc. oversaw building of the Evansville Levee Authority’s newest facility, which houses the city’s 1,600 linear feet of floodwall and provides a location for maintenance of vehicles. The city sold its former storage building located on Riverside Drive to make way for Tropicana’s new land-based casino. The Levee Authority will retain its main building at 1300 Waterworks Road.

The former Siegel’s Department Store building was one of 17 properties statewide to receive a Historic Renovation Grant, a competitive program designed to preserve and rehabilitate historic properties to further incentivize cities’ downtown economic development. Warren Investment Group owns the property and plans to use the $73,100 award for retail space on the ground floor and apartments in upper floors.

Enjolé Interiors now calls this historic building its home. Known as the Ridgway Building, it was constructed in 1860 and placed on the National Register of Historic Places in 1980. Landmark Design & Engineering as well as JPM Contractors transformed the 16,000-square foot space of Berger & Berger’s former law office into Enjolé’s new retail space on the first two floors and storage on the third and fourth floors.

This building at the corner of Third and Main streets soon will be home to the Comfort by Cross-Eyed Cricket restaurant, a spinoff of the popular local eatery Cross-Eyed Cricket at 2101 W. Pennsylvania St. Historically known as the Washington House for the hotel originally built there, the site also was home to The Farmer’s Daughter restaurant and Evansville Commercial College. 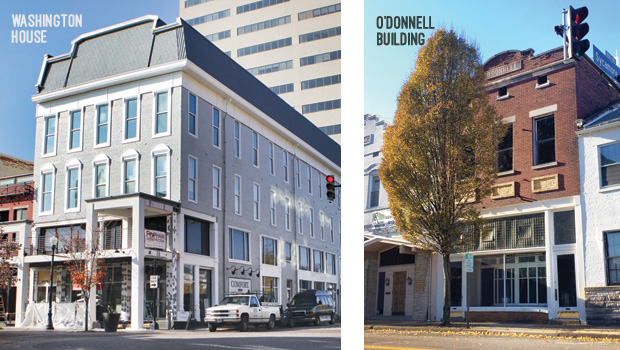 Like the Siegel’s Department Store, the O’Donnell Building’s Historic Renovation Grant will be used to create retail space on the ground floor and apartments upstairs. The building’s owner Carl Arnheiter received $39,087 that can be used on renovations such as roof replacement, masonry restoration, repair and replacement of windows, façade renovation, painting, storefront upgrades, and rear-entry improvements.

This vacant parking lot is set to become a 139-room Hyatt Place hotel, with construction to begin in spring 2017 and completed spring 2018. Construction will cost $18 million — none of which will come from taxpayer funds. Across the street, the Scottish Rite at 203 Chestnut St. will be razed to become the hotel’s parking lot. 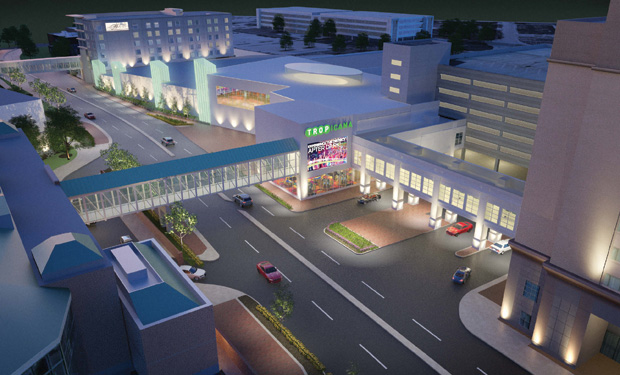 Tropicana Evansville was the first Hoosier casino to announce plans to move inland after Indiana legislators approved a bill in 2015 allowing casinos to be land-based. Properties between Le Merigot and Tropicana hotels were purchased to make way for the $50-million construction project, which began in July 2016. The 75,000-square foot casino will house restaurants, bars, lounges, and games; it is set to open late 2017 and will replace the riverboat casino. 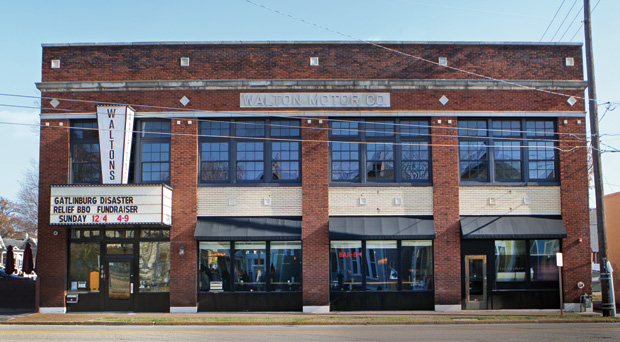 The eclectic eatery Walton’s International Comfort Food has had much success since opening in January 2016. Renovations to the building were made possible with a $50,000 grant from the federal Community Development Block Grant Program. Recently, the upstairs space of Walton’s became Fidel’s Bourbon Bar and Cigar Lounge. The bar serves premium bourbon, Prohibition-era cocktails, and soon cigars at its location in the Haynie’s Corner Arts District.

The Montrose Apartments were built in 1923, while the Maybelle Apartments were built at the back of the Montrose in 1924. DMD purchased the long-vacant building in 2012 and signed a development agreement with local developer Michael Martin of Architectural Renovators LLC in 2014 to bring new life to the building. Martin renovated 12 units — six in each complex — and converted the Montrose’s basement into two additional units. Tenants were able to move in to the 14 units October 2015.

In August 2016 after announcing plans to renovate, Warren Investment Group opened the doors of the former No-Ruz Grotto to the public for a peek inside the historic building. Built in 1868 by attorney and Army general James Shackelford, it most recently was the gathering place of social club No-Ruz Grotto. The building has been vacant for many years. Exterior updates will take place first, while the inside will offer a variety of commercial spaces. 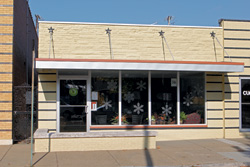 The Evansville Brewhouse nano pub opened for business July 2016 in the former McBride’s Master Cleaners & Tailors. Located next to the Alahambra Theater in the heart of the Haynie’s Corner Arts District, the small craft brewery serves its own recipe as well as other beers, hard ciders, bourbons, and wines. Public records reveal the property is owned by the city’s Brownfields Corp. 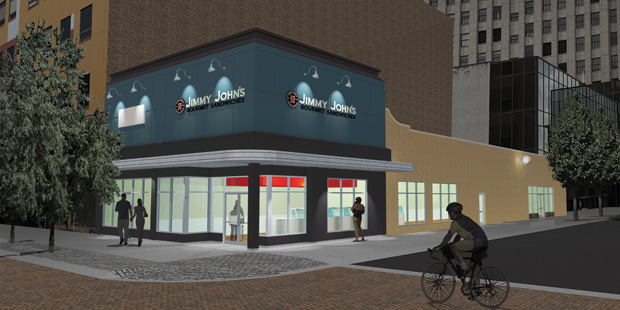 The former headquarters of Roger’s Jewelers soon will become home of anchor tenant, Jimmy John’s sandwich shop. A cellphone repair store and another tenant (yet to be confirmed) also will occupy the corner of Main and N.W. Fourth streets. Renovations began this spring, transforming the dated façade with fresh paint and walls of windows. Jimmy John’s is on course to open this winter. 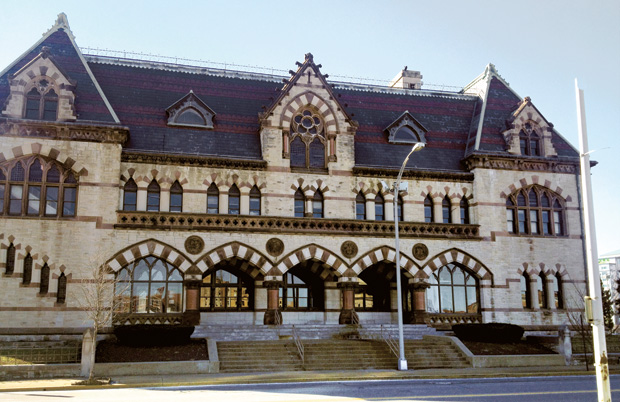 The Old Post Office Event Center may cater some of Evansville’s finest parties and gatherings by night, but by day this facility holds hearings for Social Security’s Office of Disability Adjudication and Review (ODAR). ODAR outgrew its space in the Federal Building, 101 N.W. Martin Luther King Jr. Blvd., and moved to its second- and third-floor spaces in 2015 — four years after renovations began.