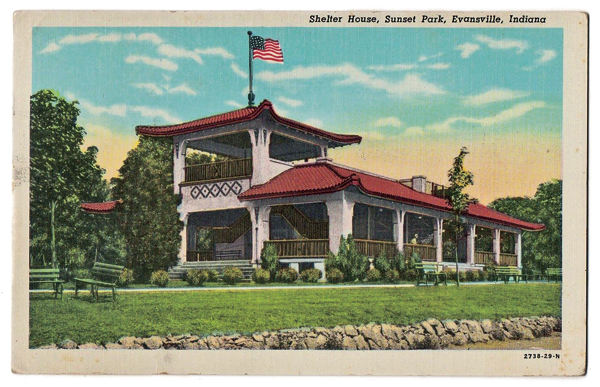 “The average question we get is, ‘Why is it in the style that it is in?’ They understand that it is a pagoda, but why? That is probably the most frequently asked question. Why would you build a pagoda in the Midwest?” says Bob Warren, executive director of the Evansville Convention & Visitors Bureau.

Go for a drive along S.E. Riverside Drive or take a walk along the Riverfront Corridor along Downtown Evansville from Sunrise Park to Tropicana and you will likely notice the Pagoda. With its red tiled roofs that curve up toward its ends, and its beige walls, the structure that stands near the edge of the Ohio River is — in southwestern Indiana — an architectural novelty.

Now the home of the Evansville Convention & Visitors Bureau, the Pagoda is also known as the Visitors Center. It was designed by architect Harry Boyle of the firm Brubaker, Stern, and Boyle and built by contractor Charles Kleiderer in Sunset Park in 1912. It contained a roof garden, cupola, bandstand, and public restrooms, according to “The Postcard History Series of Evansville” by Joseph Engler.

A story in the Nov. 21, 1912, issue of The Evansville Courier describes the structure as an oblong pavilion open on all sides with an overhanging cornice. “The roof is flat and is to be used as a roof garden and for seating during band concerts,” the story says. “The bandstand is located at one end of the building in a tower effect. The floor of the pavilion is elevated about four feet above the grade and is approached by broad cement steps on each side.”

“The Sunset Park pavilion is built in Japanese style,” The Evansville Courier wrote in a story published on Jan. 5, 1913. “This was adopted, first because it will be picturesque; second, it will be bright and cheerful with enough color in the tile roof to harmonize well with the surroundings and will be artistic.”

Because of its concrete construction, the Pagoda is American, but whether it is actually of a Japanese or Chinese style is hard to say. Delegates from Evansville’s sister city, Tochigi City, Japan, who came to the Pagoda in April 2008, remarked that the style was Chinese.

“It’s an American construction that is clad in an exotic motif but not necessarily one or the other explicitly,” says Alan Higgins, an architectural historian with Cultural Resource Analysts Inc.

Later, the Pagoda survived the famous flood of 1937 but then sat neglected, boarded up with plywood, until its restoration began in 1995. Students at McGary Middle School, directed by Southwestern Indiana Historical Society President Robert C. Spear, were largely responsible for support for the renovation project, Robert P. Patry wrote in “The City of the Four Freedoms: A History of Evansville, Indiana.”

For more information on the Evansville Convention & Visitors Bureau, call 812-421-2200 or visit visitevansville.com.