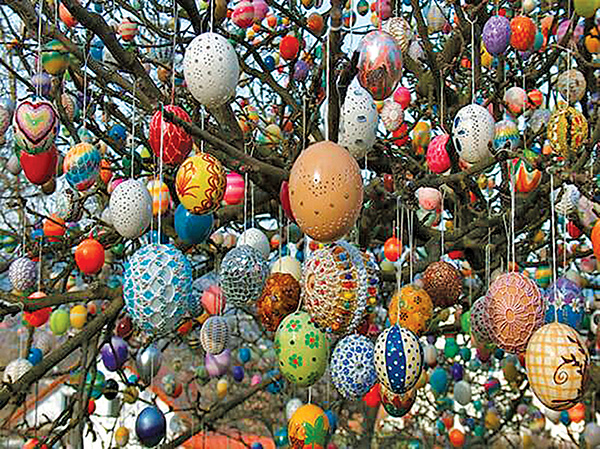 Outside of the Children’s Room at Willard Library is a display case filled with egg ornaments; all are decades old. They are the work of former children’s librarian Margaret Maier (also known as Miss Margaret) and are a part of an annual program at the library, taking place for nearly seven decades.

The egg tree came about from the opening of a box of new books by librarians Gray Williams and Margaret in 1950 — both were attracted by the colorful book jacket of the children’s book “The Egg Tree” by Katherine Milhous.

On Palm Sunday 1951, Margaret surprised the library staff and patrons with the first egg tree containing 25 eggs. In later years, trees would have more than 100 eggs. The first egg decorations were based on Pennsylvania Dutch designs. In subsequent years, theme trees based on book characters became models for the eggs. By the time of her retirement in 1989, Miss Margaret had created around 2,000 eggs, ranging from Mother Goose to library founder Willard Carpenter. Margaret’s 1976 Bicentennial American history tree even went on to be displayed at the Indiana State Fair.