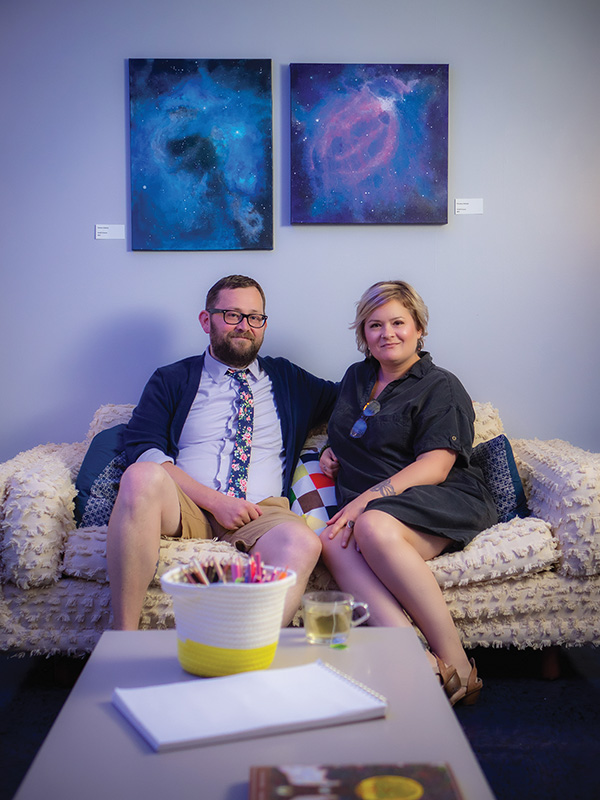 Last year, Josh Gray realized he wanted to quit his job as an IT manager and open a float center in Evansville. When he called his wife Andi Hall on a drive home from a float session in Louisville, Kentucky, to tell her his idea, the two laughed at the notion.

“But the more we talked about it, the more it seemed like a reality. So we jumped,” says Gray.

Gray and Hall, who are Evansville natives, opened the ISO Float Center (ISO stands for “In Search Of,” reflecting someone’s search for a way to relax or heal) in July and have been pleasantly surprised by the response from the community.

“Once we announced our opening, we almost were overwhelmed with the positive response,” says Gray. “The most rewarding part has been seeing people before and after the floats. Because even the most skeptical people who come in here, you can see a physical change in them.”

Float therapy is not a new concept, though the practice has gained popularity over the last few years. The concept was developed in 1954 by neuropsychiatrist John C. Lilly who found floating in warm, saline water in an isolation tank would relax him and allow his mind to continue consciousness without distraction.

The benefits of float therapy are numerous — from pain management and reduction of migraines and asthma symptoms to stimulation in creative thinking and problem solving to name a few.

“We knew opening ISO would be taking a chance, but we truly felt compelled to bring it to the community,” says Hall.

The couple’s center, located in North Park Shopping Center, offers two rooms, complete with an 8-foot-by-4-foot floating tank, private shower, and all amenities needed for either a 60-minute or 90-minute float. While floating is a private experience, the job of Gray and Hall is to act as guides, helping make sure each experience is comfortable and rewarding.

“You’re resetting your mind, body, and spirit,” says Hall. “I think it’s important for everyone to unplug for an hour. All you have to do is float — anyone can do it.” Seeing an 8-foot long tank with a hatch-door opening can be intimidating. Even though I was excited to try floating, part of me wondered how I would react in the tank.

The floats are hard to describe and best left to experience. But I can say after three sessions, I am thrilled by the outcome. I basked in complete darkness for all three floats. The first float, my time was spent more in an attempt to become acclimated to the new environment — this is true sensory deprivation and your brain tries to let go of having nothing to see, do, touch, or hear. By my second float, I felt like a pro. I’m not sure if I found an “altered state,” but I did feel as if I was in a hazy place between being asleep and awake.

After all my floats, I felt much more relaxed. Sleep came easily and my creativity was pumped up — from writing work projects or painting at home, I was a buzz of energy.

A week after my last session, I still felt creative, energetic, and relaxed.