Paige Talbert of Newburgh, Indiana, was very young when her mother Jenna, a physical therapist, and father Marco, an engineer at Vectren, suspected something was amiss.  Just an infant, Paige was inconsolable at times. At six months, doctors fitted little Paige with her first set of glasses to help her visual impairments. At nine months, she began refusing food, was diagnosed with three food allergies, and began feeding therapy to help her eat.

By age 6, doctors diagnosed Paige with autism. Like most autistic children, Paige — now 12 years old and attending Holy Spirit Catholic School’s Marian Educational Outreach program — struggled with many things. However, with the help of therapy and her family — including three older siblings Sam, Will, and Claire — she has thrived.

“Paige has truly overcome obstacles of things we were once told she would never do,” says Jenna. “We are so proud of her and grateful for our family.”

One form of therapy that has given Paige a release is art. While attending a birthday party of a friend with a similar condition, she was introduced to MnemeTherapy, a type of art therapy originally developed for Alzheimer’s patients. Paige took to the activity right away, prompting Jenna and Marco to contact Beautiful Minds LLC therapist Tina Gibbs.

“There’s all these super highways going on in our brain, and when a brain has been damaged or is underdeveloped, there is a bridge or connection that’s blown out,” explains Gibbs. “What this therapy does is create a detour around that and form a new connection.”

Every other week, Paige sits down with Tina, paintbrush in hand, and begins to create a new work of art. They discuss what painting she would like to do before picking out colors and getting started.

“In the beginning, she was very apprehensive, but now she takes less guidance and does her thing,” says Gibbs. “She’s not afraid to make her own decisions.” 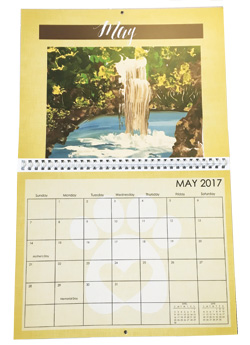 In the past three years, Paige has created 86 pieces of art. The response from family and friends has been so positive, Jenna decided to make a calendar of Paige’s creations as Christmas gifts. From there, the Talberts began to sell the calendars to the public, raising funds to continue Paige’s therapy. So far, 75 calendars have been purchased.

“She loves to paint landscapes and she really likes to paint animals,” says Jenna. “All the money raised from this project is used to pay for Paige’s art therapy, which is not covered by insurance.”

For Marco and Jenna, the art therapy has changed Paige in positive ways. It has helped improve Paige’s bilateral coordination, aiding her in learning how to ride a bike. Her visual tracking and fine motor skills have improved as well, says Jenna, allowing her to legibly write and read close to her grade level. Gibbs agrees Paige’s immense talent has given her more confidence.

“When she gets done with a painting and it looks awesome, it helps her self worth,” she says. “It gives her that extra boost to maybe try something else.”