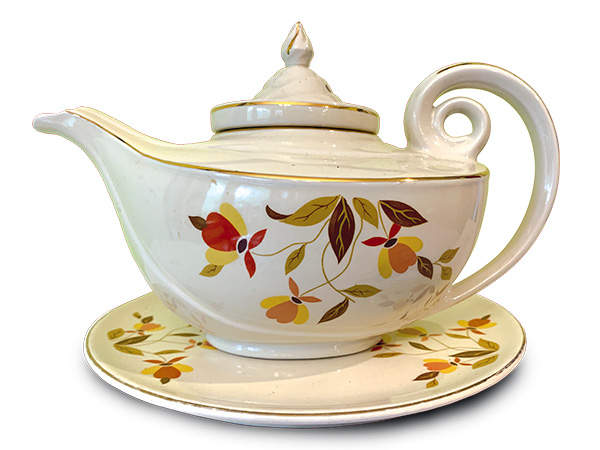 In the 1930s, it was not an uncommon occurrence for those in the Midwest to be paid a visit by the Jewel Tea Co. salesman. These traveling salesmen from the northern Illinois-based company sold fresh ground coffee, tea, spices, and other grocery and household items from 1901 to 1981.

In 1933, Jewel Tea partnered with Hall China Company to create one of the most popular china patterns to be offered by Jewel Tea — the autumn leaf. These pieces have become collector’s items. For Sharon Ruder, her autumn leaf Jewel Tea Co. teapot is special because it belonged to her mother Rita Johnson, who passed away in 2017.

“It was on top of the bread box for 40-plus years until my parents moved to a retirement home,” says Ruder, operations coordinator at Stifel Ruder Investment Group. “It was never used at our house, just a decorative piece.”

Ruder isn’t sure of how the teapot came into her mother’s ownership. Her brother believes the pot was their maternal grandmother’s, while Ruder thought their mother purchased it as a reminder of her own childhood in Mishawaka, Indiana. Either way, like so many others familiar with the Jewel Tea Co., the teapot is an heirloom that evokes cherished memories and stories.

When you lose your parents, you treasure your memories,” says Ruder. “The teapot is part of my mom’s love that is still with me.”