Deoxyribonucleic acid, otherwise known as DNA — have you considered testing yours to discover your family story? I tested with AncestryDNA, the world’s largest consumer DNA database. AncestryDNA promises to uncover your ethnic mix, discover distant relatives, and find new details about your unique family history with a simple test.

AncestryDNA’s autosomal DNA kit easily is ordered online. About a week after ordering, mine arrived in a small box. The instructions were simple: Activate your kit online, gather DNA by spitting into a small tube, and return the sample (in a bio bag) in the postage prepaid box. My test would be completed six to eight weeks after the company’s Utah laboratory received the package.

Via email, the company confirmed my sample was received Aug. 1. On Sept. 3, I received an email announcing my DNA results were ready. During processing, the company sent three emails including an offer to join Ancestry.com and behind-the-scenes videos explaining how they analyze DNA. You will better understand your ethnicity estimate — where your ancestors were 500 to 1,000 years ago — if you view the AncestryDNA videos. 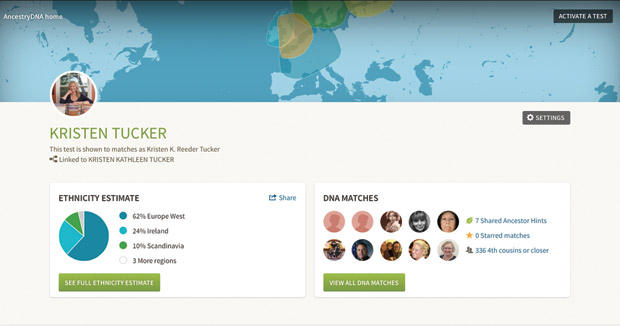 The Verdict
I clicked on the See My Results button, which revealed my ethnicity estimates: 62 percent, Western Europe; 24 percent, Ireland; 10 percent, Scandinavia; and three additional regions. Another click to the full ethnicity estimate included 2 percent Finland/Northwest Russia and trace amounts of Great Britain and North Africa. The company says trace amounts may be by chance and not actually part of your genetic makeup.

My mother’s grandparents both were Norwegian. In 1871, they immigrated to the U.S. as teenagers with their families and married in Minnesota. Looking strictly at our lineage, my mother was 50 percent Norwegian; I am 25 percent. However, my ethnicity estimate is 10 percent, thanks to the random nature of DNA inheritance. I was surprised to learn I am nearly a quarter Irish. My father’s British ancestry likely presents as Western European in my estimate. AcenstryDNA explains true Brits typically only are 60 percent native due to the historically continuous exchange between Great Britain and neighboring regions of Europe.

Also shown were my DNA matches — more than 350 fourth (or closer) cousins. With a database of more than 2 million consumer DNA tests, expect to match DNA with hundreds of cousins, especially if your family were early immigrants to the U.S. With the “hints” AncestryDNA provides (shared family tree information), I have discovered DNA matches on the maternal and paternal sides of both of my parents.

I have connected with a third cousin on my mother’s paternal side, the Norwegians. Ann, a medical research scientist at St. Louis University, has filled in some of the blanks in my family story, sharing, for example, the ship’s passenger list that included our ancestors’ families. Ann also has sent me dozens of historic family photos.

Need to Know
The AncestryDNA test costs $99; however, after I tested, I was offered the opportunity to extend a discount to friends and family. Ask friends who have tested if they have an offer to share. 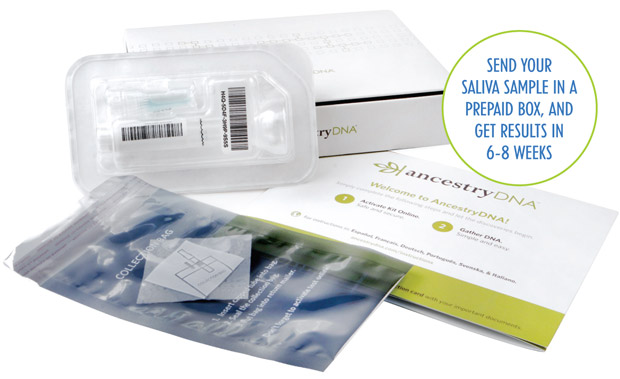