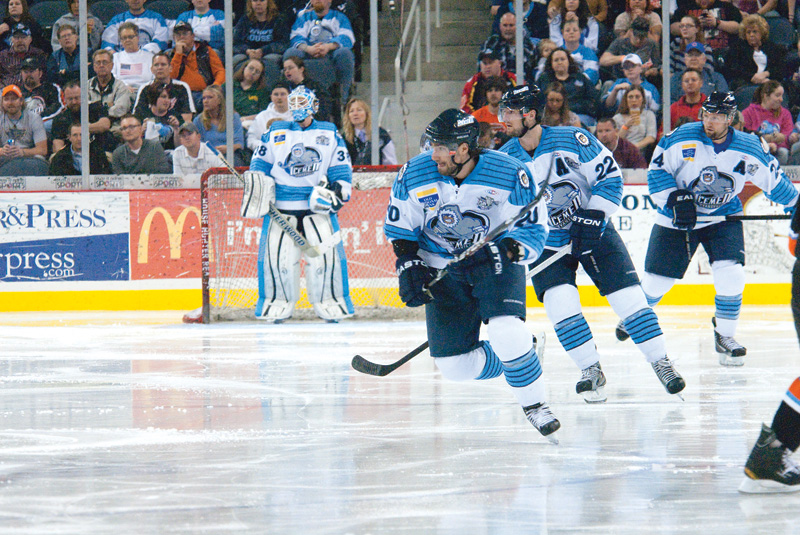 To conclude a spectacular season marked by fresh talent, the loud and flashy Ford Center, and thousands of faithful new fanatics, the Evansville IceMen announced on May 17 their admission into the ECHL, a league commonly associated with the National Hockey League in a minor league capacity.

The news was met with enthusiasm, but the transition from the Central Hockey League left the IceMen hovering in limbo with no affiliations — i.e., business relationships wherein NHL teams associate with (but don’t own) teams around the ECHL for the purpose of developing young talent. While three teams in the ECHL remain independent, the majority claim at least one NHL affiliation.

On June 15, IceMen owner and president Ron Geary publicized the IceMen’s partnership with the NHL’s Columbus Blue Jackets. “We were set with that association to move forward,” says Terry Ficorelli, vice president of communications and broadcasting. “But we always had the St. Louis Blues in the backs of our minds because they’re so close to us. A lot of people here in Evansville are Blues hockey fans, and the Blues TV games come into this market through Fox Sports Midwest.” When the Blues disbanded from their long-term commitment with the Alaska Aces in Anchorage, Alaska, the IceMen were quick to move in. On Aug. 30, the IceMen released a statement announcing they were acquired by the Blues and the Peoria Rivermen, their AHL affiliate.

Ficorelli says the best part of the IceMen’s NHL connections centers on salaries. The ECHL imposes fairly strict salary caps for its teams, but any players the Blues and Blue Jackets provide the IceMen are not the financial responsibility of the IceMen. “If a player is sent to us that is making $50,000 with the Blues, we’re responsible for just a percentage of that,” says Ficorelli.

Even though the recent NHL lockout could force the IceMen to reconsider their roster, Ficorelli is definitely excited about the buzz the IceMen have created. “One of the coolest things about it,” he says, referencing the days when the Detroit Tigers’ AAA team in Evansville, the Triplets, drew large crowds, “is that a couple years from now, you’ll be watching a Blues or Blue Jackets game and say, ‘I saw that guy when he played for the IceMen two years ago.’”