For Margaret McMullan and her father James, reading and talking about what they were reading was their way of staying close, despite separate postal codes.

When her father died in April 2012 from a prolonged illness, McMullan, an English professor at the University of Evansville who also has written six published novels, sought to read stories written by women about their relationships with their fathers as a way to process her grief. As her search for an anthology turned up empty, Margaret decided to create her own. “Every Father’s Daughter,” an anthology of 25 women writers remembering their fathers, will be published by McPherson & Company April 9. By a complete coincidence, McPherson & Company’s Bruce McPherson also grew up in Evansville and attended Evansville Day School. The publishing company is operated in the Hudson Valley of New York.

To see if the idea of creating a book was even possible, McMullan wrote handwritten letters and emails to writers and authors her father loved or works he loved in what she calls, “a shot in the dark.”

“It was a plea. I told them the story of my father, the book he loved of theirs or included the passage he enjoyed,” says McMullan, who has taught at UE for the last 25 years and plans to retire in May to write full time. She currently holds the Melvin Peterson Endowed Chair in creative writing at UE and serves as a faculty mentor at the Stony Brook Southampton low-residency MFA program.

“I was amazed — these real professionals, responded so elegantly,” she says. “I had never done anything like this before. I have heard people say they would never do something like this again and it is such a pain, but honestly, I would love to do ‘Volume II.’ It got me out of a God-awful funk and it kept me busy. It was just what I needed.”

Names such as Nobel Laureate Alice Munro and Pulitzer Prize winner Jane Smiley provided essays for the anthology. “The king of the essay form,” according to McMullan, and Columbia University, New York, Professor and Nonfiction Director Phillip Lopate wrote the introduction (an essay by his daughter Lily Lopate is included in the book). Other contributors included Ann Hood, Jill McCorkle, Lee Smith, and Joyce Maynard. Twenty-five essays are featured. In fact, McMullan had too many to fit into one work.

McMullan, who lives in Evansville with her husband Pat O’Connor and their son James — who is named after her father — says reading the authors’ stories and compiling the anthology helped her through the grieving process.

“I hate to admit that because I’m not that kind of writer, but it’s true,” she says. “I just couldn’t believe a book like this wasn’t out there.”

Three of McMullan’s former UE students also are included. She recalls grading papers by her father’s bedside and coating the pieces in red ink when her father stopped her.

“He said, ‘Will you please go easier on them?’ It was a good year for students to take my class that year,” she says with a laugh. “Through the years, I’ve told my father stories of students for better or for worse. I loved that I included three former students. That was so meaningful to me.” 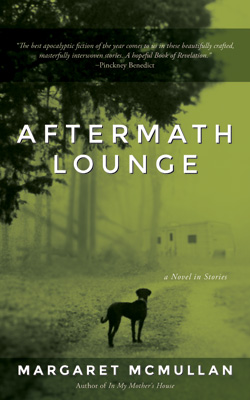 Those former students include Jessica Woodruff of Newburgh, Indiana, Johanna Gohmann of Brooklyn, New York, and Jane Friedman of Charlottesville, Virginia. Friedman was one of McMullan’s first students, who began taking classes from her in 1995 and continued taking a class a year until she graduated in 1998 from the University of Evansville.

McMullan and Friedman remained in touch throughout the years, often running into each other at writing conferences. McMullan reached out to Friedman in 2012 to ask to contribute a piece to the anthology and Friedman says she was honored to accept. The former Oakland City, Indiana, native, who now teaches at the University of Virginia and works as “publishing guru,” says McMullan. She recalled that many of her essays written for her class were very family driven and not that far of a stretch to produce.

Friedman says “The Memory I Choose” is about the relationship she had with her father growing up in Southern Indiana and learning to accept her memories are dramatically different from the memories her mother holds.

“It is an honor to be included with such rock star names in the literary world that she has included in this lineup,” says Friedman. “She is so well loved and respected in the literary community.”

McMullan also has a second book being published in April titled “Aftermath Lounge,” a novel in stories about the aftermath of Hurricane Katrina set in a Mississippi Gulf Coast town. This year is the 10th anniversary of the deadly hurricane. She received a National Endowment of the Arts grant to complete this collection, and it marks her seventh book of fiction.

"The Memory I Choose"

excerpt from "EVERY FATHER’S DAUGHTER" pg. 130  By Jane Friedman

When he himself arrived in southern Indiana (unannounced, as the story goes), they went to a Justice of the Peace to get married. About that time, my mom realized my father had been lying about his age. He was fifty-five, not fifty. (She was forty.) Two of my mother’s sisters went as witnesses to the marriage. They hated my father. Actually, as my mom tells it, everyone who met him hated him— except her, in the beginning.

When they married, my father demanded that my mother’s five children move out of the home. Their ages at the time ranged from thirteen to nineteen. I don’t know how long it took, how hard it was, or if it was in process before he arrived, but they all did leave, except for the youngest (though he eventually did, too, not long after I was born).

My mother claims temporary insanity during that time. I wonder how difficult it was to see her kids leave, and how much she was blinded by the relationship. In a home movie that my father took before I was born, he and my mother drive around town, drink, and blow kisses at each other. They can only be described one way: in love.

Whether it was love or insanity, my mother didn’t plan on what happened next: becoming pregnant at age forty-one. My half-siblings were mortified.

I don’t talk about my father with my half-siblings. I don’t ask them to set the record straight on what my father did or did not do. Their silence on the matter says everything I need to know. They didn’t attend his memorial service when he died, and they rarely tell stories about him.