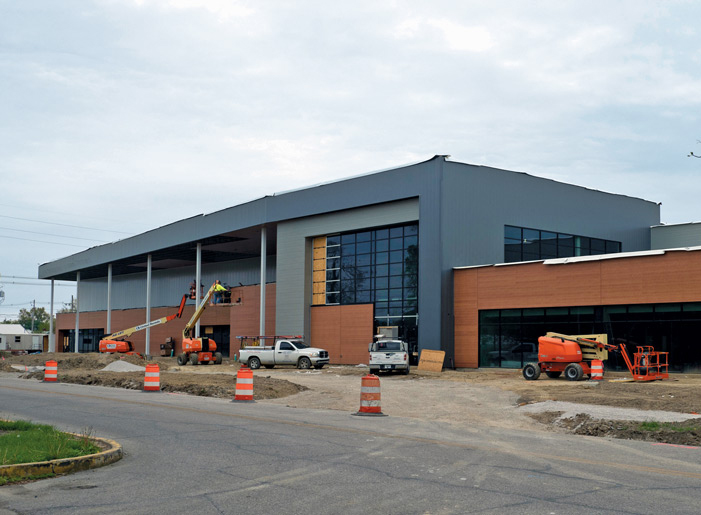 The long-awaited Deaconess Aquatic Center, championed by local officials and community members, now is in the final stages of construction, with the project set for completion in early fall — just in time for high school swim season.

An effort supported by Mayor Lloyd Winnecke and other city officials, countless community members, and even Olympic gold medalist and Evansville native Lilly King, the Aquatic Center looks to be a phenomenal asset to a community that will encourage and inspire future swimmers by serving Evansville area schools and local residents.

The new facility, located in Garvin Park across from Bosse Field, will replace the Lloyd Pool, which the Evansville Parks Board voted to demolish on May 5 after nearly half a century of operation. The $28.4 million state-of-the-art facility will be managed by the YMCA.

Site clearing and mass excavation for the project began in early 2020, with the foundation being built in May of last year. The structure has been erected from the site throughout the past year and finishing touches are being put on now.

“It’s pretty incredible that the team of people that were out here working for the city of Evansville has been able to accomplish this in that short period of time,” says Dan Alcorn, project manager with Garmong Construction Services. 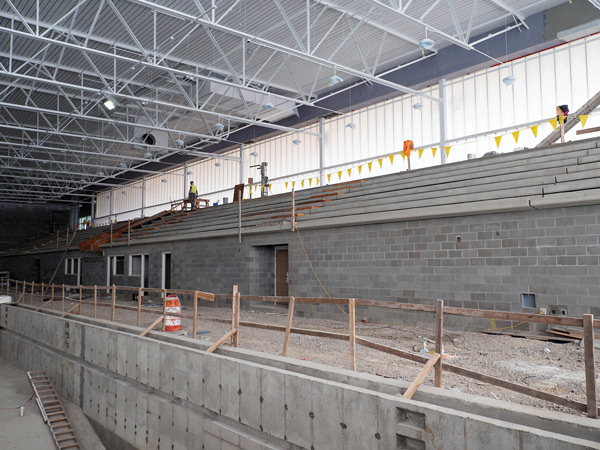 Two large LED scoreboards approximately 10-feet by 20-feet will be placed on the wall across from locker rooms below the mezzanine along with a tribute to Lilly King on the west wall. Moveable aluminum bleachers can be brought in for special events for additional seating.

62,000 pounds of sand make up the pools’ filter system and pumps can turn over about 950,000 gallons of water every five hours.

The Aquatic Center also features the latest in energy efficient heating technology with units that can store heat from the humidity of the competition pool room to heat the pool in the summer months.

On the other side of the competition pool is a 91,000-gallon leisure pool for recreational and teaching purposes with a zero-depth entry area along with play features, basketball goals, and space for swim lessons. The space leads to a gated outdoor splash pad area with about a dozen spray features.

After years without a proper community pool, this facility will give local residents a splash of sports and recreation.

“We’re all just really proud for this project to be where it is now,” says Alcorn.