Whether it’s buying, selling, recycling, renting, or auctioning used and new equipment, SIGMA Equipment has transformed its business from a startup enterprise in a small garage to a multi-million-dollar company that buys and sells equipment all over the world.

Rob Palmer, a Purdue mechanical engineering graduate and Reitz High School graduate, founded SIGMA in 2003 after leaving a competitor in the used equipment industry that sold turnkey product lines, which are products that are built fully complete and ready to operate. Before that, he worked for a manufacturer in Chicago, where he also started a business with another partner just three years out of school.

“I got a taste of what it meant to start a company from scratch,” he says. “The business partnership didn’t work out, but I really learned a lot about what not to do and learned through a lot of mistakes.”

Palmer comes from a family of entrepreneurs, most notably his grandfather Victor Funke, who he followed around as a child as he was building businesses.

“I think that just the thrill of being around someone when you’re young and watching them take something as basic components and then build a thriving business out of it was just really intriguing,” he says.

What sparked Palmer’s interest in a new startup was the small business atmosphere and working in a culture where employees take ownership of their work.

So, Palmer went to work on building a new startup, with a smaller metropolitan area like Evansville being the perfect place to grow. Palmer started in a small Evansville garage and hired SIGMA’s first employee, a website designer. Recognizing the future of commerce would be through the internet, they worked on Search Engine Optimizations in the early days when Google was coming into its own and understanding how important it was to direct traffic to their website.

Throughout the years, SIGMA has created its own software, from websites to inventory management systems to invoicing systems, which is unique in the industry. Palmer attributes this foresight on technology as a key reason to SIGMA’s success.

“For a small business, we do a lot of internal development, and it’s one thing that sets us apart from other small businesses, especially in Evansville,” says Patrick Johnson, IT director and interim director of marketing at SIGMA, who was also the first employee at the company nearly 15 years ago. “We are technology driven. We’re as much of an internet company as we are anything else.”

▲ From meat tenderizers to White Castle packaging machines and everything in between, you name it, and SIGMA has probably sold it. Now running out of inventory space in their 250,000 square foot warehouse, SIGMA has recently acquired the 630,000-square-foot facility on Highway 41 to house their sea of machines.

But what does SIGMA actually do? What kind of equipment are they buying and selling?

Senior Sales Lead Scott Birge says what they sell is a need. Customers will call and say what they would like to package their product in order to get it to market. SIGMA sells, or rents, them the equipment to meet their needs.

“If you go to the grocery store, and you walk down the aisle, we’ll sell the used packaging and process equipment that makes a lot of the packaging for the product you see in the store,” says Birge, a 12-year employee and the company’s first salesperson. “My wife hates going to (the grocery store) with me because she’s looking at food, I’m looking at packaging.”

About 80 percent of SIGMA’s 16,000-dealer network is food processing equipment, though it also sells equipment to the pharmaceutical, health and beauty, consumer goods, and contract packaging industries.

From meat tenderizers to White Castle packaging machines, you name it, and SIGMA has probably sold it. It sells to all sizes of companies, though its ideal company is medium sized, or around 51-250 employees. It also sells internationally, mostly to Canada and Mexico.

“We sell across to small mom-and-pop shops up to Fortune 500 companies,” says Randa Doleh, business systems and analytics manager and senior appraiser. 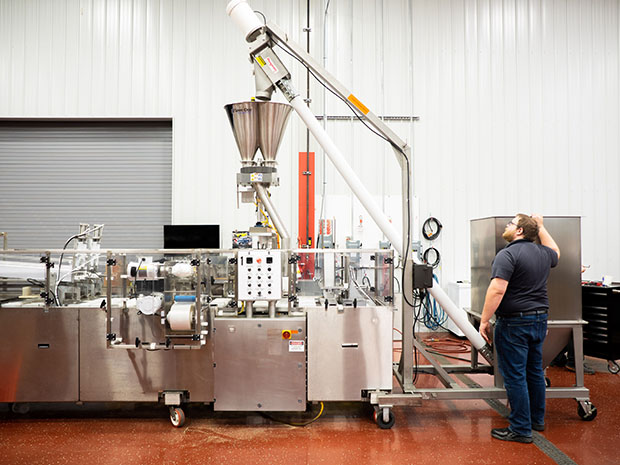 ▲ Project Manager Justin Morris tests a cup filler machine meant to package bread crumbs that sits in the back of SIGMA’s shop at their warehouse at 3001 Maxx Road.

SIGMA started its rental fleet about five years ago and has seen it take off in recent years due to the availability of its inventory. This separates SIGMA from competitor suppliers selling new equipment, which is often backed up for weeks and sometimes months. A benefit for renters is 50 percent of their rental cost goes back to their buyout of the equipment.

The SIGMA group encompasses seven divisions — equipment, appraisal, auction, recovery surplus, shop, and the newly acquired C&I Electronics.
C&I is an electronics recycler certified by the Environmental Protection Agency and located in Evansville since 1994. Many of the corporate clients SIGMA sells to have sustainability goals and targets, which makes recycling unusable equipment and parts a priority.

“It also helps us attract a larger company that needs to report on their environmental and sustainability impacts,” says Marketing Manager Kelsey Dus. “It allows us to potentially go after larger clients and offer services.”

Seeing substantial growth within the first several years of SIGMA’s formation, the company leased its first warehouse in the Garvin Industrial Park in 2007 before moving to its current location on Maxx Road in 2010 in the Lynch Road Industrial Park.

Palmer never thought SIGMA would fill up its current warehouse with more than 250,000 square feet of space, but within a year, it was already looking to expand. SIGMA has since purchased five buildings in Evansville, including the recently acquired 630,000-square-foot Vitro Automotive plant on Highway 41 across from North High School that formerly housed Pittsburgh Glass Works.

SIGMA’s growth in the last few years has been staggering, increasing from three to seven divisions since 2017. Now with 113 employees, SIGMA handles a multitude of services for clients, including full-scale shipping along with full mechanical integration and engineering projects as customers have desired a one-stop shop for equipment services.

“We look at us as being the Amazon of our industry,” says Palmer. “We can provide this whole array of solutions and make it very straightforward and easy for the client to give us that trusted partnership that we’re looking for.”

SIGMA’s Surplus, a division, which trades used parts rather than complete machinery, has experienced the company’s largest uptick, turning $500,000 in sales in 2017 into a targeted $4 million in sales this year. Overall, SIGMA has done so well that it has even beaten its projected sales numbers for 2022. 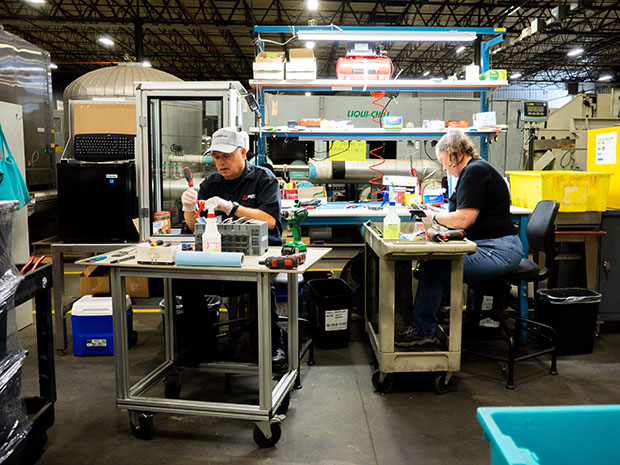 <– Larry and Fanny Lisembee work on recycling spare items. SIGMA Surplus, a division which trades used parts, has exploded in recent years and is expected to become the company’s largest division. Surplus alone turned $500,000 in sales in 2017 into a targeted $4 million in sales this year.

“The more services that we offer fits in line with what our clients’ needs are,” says Chief Operations Officer Michael LaGrange. “There’s a lot of companies out there that do what we do, but none of them do everything that we do. That’s what sets us apart.”

Another transformation in the industry has been the technology used to show and market product to potential clients.

After detail cleaning the inventory, its marketing team takes anywhere from 60 to 100 photos of each piece of equipment that comes through the warehouse along with powerup and walkaround videos, so clients can get an up-to-date visual of the equipment before purchasing.

“The buyer can really see ahead of time and they don’t have to get on a plane and come here,” says Palmer. “In a lot of ways, we’re kind of like the used car industry, where people detail cars. We were the first to really focus on detailing the machine out and getting it as close to new as possible.”

In January 2020, SIGMA became an ESOP (Employee Stock Ownership Program) company. Thirty percent of the company was distributed back to the employees through the program, and all full-time employees who have worked over 1,000 hours have a distribution of stock. Employees can acquire more shares just for working there. 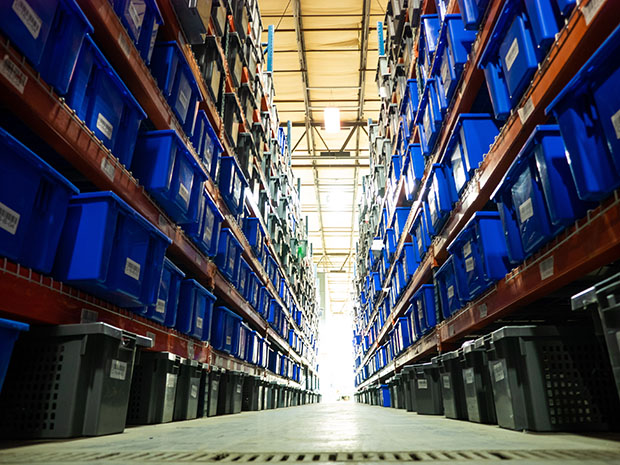 Palmer was introduced to the ESOP concept from a past employer and wanted to eventually bring that to SIGMA.

“He did it because we have the right culture here. The employees develop the culture, and you can do an ESOP because of that,” says LaGrange. “What you don’t want to do is take an ESOP and try to force the people to be employee owners. You have to have that culture first.”

It’s that unique culture that keeps employees at SIGMA, allowing them to experiment without fear of being punished for any possible failure.

“Most of the reason we’re successful here is the culture and we believe strongly in our behaviors and hire based on them,” says Palmer. “You have to find the right people that fit in the culture, because it’s really hard to change behavior sets that aren’t what your business is already built on.”