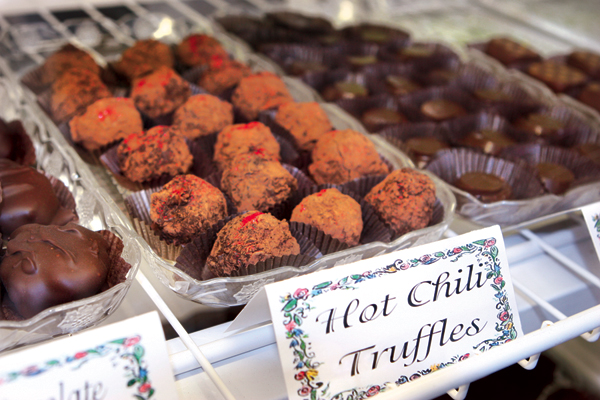 A dozen years ago, Sandy Robb opened her cake and candy shop on West Franklin Street in a building more than a century old. Her inspiration came from her childhood: “I missed the candy shop,” she says. Today, the longtime cake baker and candy maker still has a knack for sweets. Admittedly, Robb likes traditional candies, including caramel pecan flipovers and blueberry truffles, but that’s her personal preference. She’s adventurous in the kitchen, so on Robb’s shelves in Sandy’s Cakes & Candy Supplies (2301 W. Franklin St.) are red hot chili truffles — strong mixtures of sweet chocolate and fiery chili.

Robb’s oldest daughter, Sara Rhoades, encouraged the creation after she returned two years ago from a vacation in North Carolina where she stepped into a small, coastal candy shop with a similar item. The red hot chili truffle begins with dark chocolate mixed with a heavy whipping cream. Robb then injects hot chili oil to create a spicy center. Rolled in a cocoa powder, the candy is topped by an edible red glitter. The result is a truffle that has a deceivingly chocolatey taste in your mouth but takes a spicy turn in the throat once the bite is complete.

Robb’s culinary career began three decades ago with cakes, however, and her shop shines with custom, three-dimensional creations: carefully crafted turkeys, snowmen, and more. When it comes to daring treats, Robb relies on her family’s opinions, she says: “They’re my guinea pigs.”