Fired Up for Success 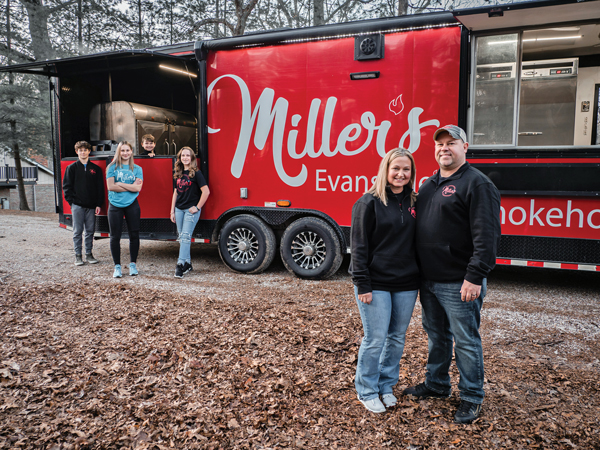 If you’ve seen Miller’s Barbecue and Catering’s massive red mobile smokehouse out in the city, you probably smelled the robust aroma of hickory and cherry smoked woods or even had a chance to taste some of its savory sauced and seasoned barbecue, but what you may not know is the story behind one of Evansville’s fastest growing caterers.

Owned by former special education teacher and wrestling coach Warren Miller and his wife Dianna, and operated along with their four children, the Miller’s passion for smoking meats began nearly 20 years ago, when Warren competed in barbecuing competitions with his father and friends and won several championships along the way.

When Warren married Dianna and the Millers became busy with raising their young family, the competitions ceased, but the desire to put Evansville on the map for delicious smoked meats and sides was still at the top of their minds. As their children grew older, the Millers began focusing more time and energy into the competitions and even started cooking for friends and family, who clamored for their tasty barbecue.

“We’d go to these competitions and win,” says Warren. “We’d have the kids taste testing because they immediately would tell you the truth, like if it’s spicy or no good. If you want to win a competition, it doesn’t matter what you want; it’s what (customers) want. If you have something too spicy or too sweet, you’re going to lose. We try to find that middle ground to where the market defines us.”

It wasn’t until 2016 that owning their own business became a reality. Word quickly spread about the Millers’ family-and-friends barbecues, and suddenly they were being asked to cater events, leading them to officially found Miller’s Barbecue and Catering that year.

What started out as a parttime job traveling the Tri-State with a tent and smoker grew exponentially in just a few years. By 2018, Dianna resigned from her job as a school social worker to come on board the business full time, and on the Millers’ 15th wedding anniversary, they bought a huge, red mobile smokehouse branded with their logo that they take to roadside events and some catering jobs. Warren would resign from his day job and go whole hog in May 2019.

The trailer itself is a fully equipped kitchen with a full-sized smoker, stove, oven, warmer, steam table, refrigerator, and sinks. It was custom designed by Southern Dimensions Group, a concessions trailer manufacturer in Waycross, Georgia.

“I just want to cook on it,” says Warren. “I don’t want to be a maintenance guy, because we are already so busy.”

“I’m not a crazy meat person to be honest, but I can’t stop eating the kielbasa,” says Dianna. “It’s so dang good.”

The Millers use all original recipes for their seasonings (Miller’s Addiction all-purpose rub) and sauces (Miller’s Original 17), which they also bottle and sell. They also have eight signature sides — mastered by Dianna with her strong knowledge in knowing how to compliment the award-winning meats — such as Miller’s mac, brisket baked beans, garlic herb potatoes, organic spring mix salad, ranch slaw, seasoned green beans and creamy potato salad. For dessert, they serve up Oreo banana pudding and brookies, marbled layers of brownie batter and chocolate chip cookie dough.

The couple’s four children — Charli (17), Walker (15), Saylah (13), and Eliot (10) — also occasionally step inside the mobile smokehouse to help their parents with caterings and roadside events.

“Sometimes they need help whenever we’re all busy, because they need certain things to be done and they don’t have any help,” says Charlie. “We have to step in and help them a lot, whenever we have our homework to do and stuff like that. It’s kind of aggravating sometimes, but we just want to help them get it done.”

Though they sometimes argue like any normal family, Dianna says it’s fun working together as a family.

“It’s a lot of fun doing this together,” she says. “The teamwork for these kids in our family blows me away every day. Even though they don’t help out as much as they used to, they know what’s expected of them, and we’re at the point now where it’s really brought us closer as we spend more time together.”

“This is some of our favorite time with our kids,” adds Warren. “We work together really well. Our kids have observed and learned first-hand what it takes to start a business. They continue to develop their hard-working skills, teamwork, communication skills and other important qualities of being a leader and possibly one day starting and owning a business themselves.”

Though most of their business is catering, hungry customers can often find the Millers out and about across the Tri-State at local venues such as Simplicity Furniture every Friday from April to September. They also cater the Korn Ferry Championship, held each August at Victoria National Golf Club in Newburgh, Indiana and some of their products are available at Ghost Quesadilla in Newburgh and their new location on the west side.

“I think our vision is to stay local. If there’s a complaint, we’re upset,” says Warren. “That’s why we want every order to be premium quality. More than anything, we want to have a strong reputation in the community and leave a legacy.”