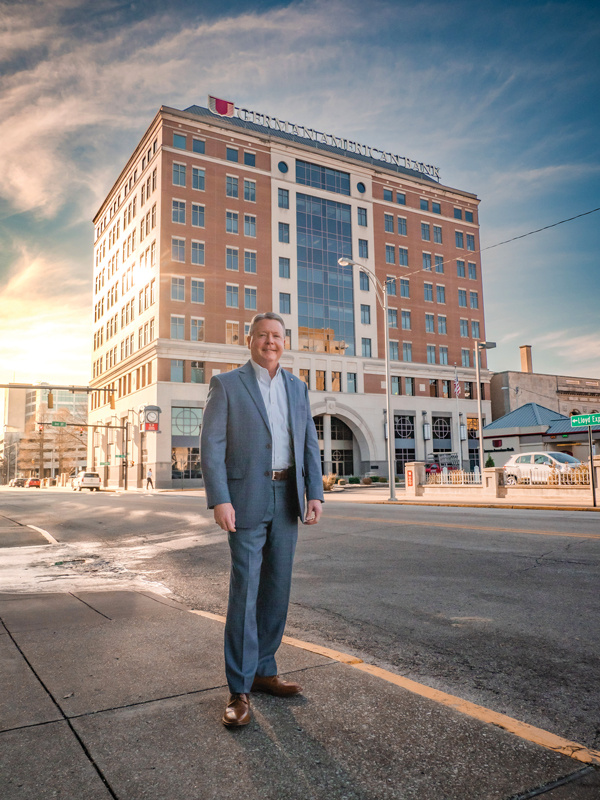 Many things have contributed to John Lamb’s success in banking, but if you ask him, it’s his strong connection to the community that has solidified his nearly 40 years in the industry.

“We feel like we’re only successful if the communities we serve are successful,” says Lamb, president of German American Bank’s southwest division, which encompasses Vanderburgh, Warrick, Gibson, Spencer, and Perry counties in Indiana, and Henderson and Daviess counties in Kentucky.

Lamb translates that commitment by serving on the Board of Directors for the Deaconess Foundation, Downtown Evansville Economic Improvement District, Evansville Regional Economic Partnership, and Evansville Industrial Foundation. He is also the treasurer of the Evansville Country Club and will chair the United Way of Southwestern Indiana’s 2022 campaign. An expert in finance and fundraising, he has also been involved with capital campaigns for the YMCA of Southwestern Indiana’s Camp Carson, Ronald McDonald House Charities of the Ohio Valley, and United Way.

What has helped you maintain such a long career in this region?

I think it’s having the ability to analyze financial situations of businesses. That’s been my background: I’ve predominantly in my career been on the commercial side of banking and working in the commercial lending area. With that, there’s a lot of analysis and research that’s done on our customers. So having a strong financial background is pretty critical. The other thing that is important is having people skills, because you’re dealing with a variety of different individuals, whether it be employees, customers of the bank, business owners, or people in the community. It’s one of the things that attracted me to banking. The fabric of our company is being a big part in the community and being involved in supporting our employees and community organizations.

How has banking evolved since you started working in the industry in 1983?
Certainly, one of the biggest changes is how fast technology has accelerated and changed everything from communication to the technology that we use every day. Not too long ago, you had to physically go to a bank to conduct all your transactions. Now you can do pretty much everything from a mobile device. The plus side is it’s more efficient, but the downside is it’s harder to build relationships without that face-to-face interaction. However, we do recognize that our clients want this channel available to them and have no problem offering it to them.

What type of mentoring do you perform within the banking industry?
We have some internal mentoring programs here at the bank. It’s really just about being a sounding board for (employees). You’re working through their career and their position, and you’re there to offer advice and counsel to them.

How do capital campaigns help community organizations?
There are a lot of organizations that are providing needed services in our community, and with that, they have to have access to funding to be able to provide those services. As those organizations are growing and evolving, they need access to capital to expand their office space or buy extra equipment. It’s pretty common for organizations to run capital campaigns to raise the funds for those types of activities. One of the campaigns that I chaired was for the YMCA’s Camp Carson. The camp has been there since the 1940s, and it provides tremendous services for youth. The cabins they had for the camp dated back to the original camp, so one of the major uses of the funds from that campaign was to build new cabins for the kids to stay in.