Flames at the Four Freedoms 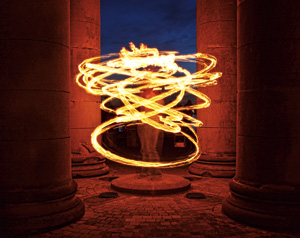 Four years ago, Contessa Kindfire stood in a parking lot holding a plastic hoop with Kevlar wicks. As she lit the wicks on fire and began to spin the hoop around her body, a friend hovered nearby with a wet towel — “just to make sure nothing bad would happen,” Kindfire says.

Kindfire, now a confident “fire spinner,” is one of five members of the Evansville Fire Family. The performers light up the Four Freedoms Monument every Sunday evening, piquing the curiosity of people strolling along the Riverfront or driving down Veterans Memorial Parkway.

“I’ve been a bit of a pyro since I was a kid,” admits Kindfire, a professional fire performer who goes by her stage name, travels to gigs around the Midwest, and dances with local burlesque troupe the Drop Dead Darlings.

The Evansville Fire Family started performing in April after Kindfire and longtime friend J. Scott Myers (who performs with a staff), recruited three other members: “Miss Sunshine” on devil sticks and Nick Will and “Spain” on poi. (Poi is a traditional art of the Maori people in New Zealand; the fire version includes chains with a bundle of wicking on one end and a handle on the other.)

As for mastering the art of fire dancing, “you learn by each burn,” Kindfire says. No members of the group have been seriously injured, though. At the Sunday shows, a security team blocks off the monument and keeps spectators away from the performers. Fire extinguishers and a fire blanket always are on hand.     In mid-June, the group’s Downtown performances went on a temporary hiatus as members sought safety approval from city officials, but as of press time, Sunday shows were scheduled to resume June 27. The Evansville Fire Family also will perform at Evansville Otters home baseball games throughout the summer.

The visual spectacle draws a diverse crowd, including young children who come with their parents. “Evansville is in on it,” Kindfire says. “We do this for the community. They eat it up.”

The Evansville Fire Family performs free shows every Sunday at sundown, weather permitting. Learn more about the group on their Facebook page.