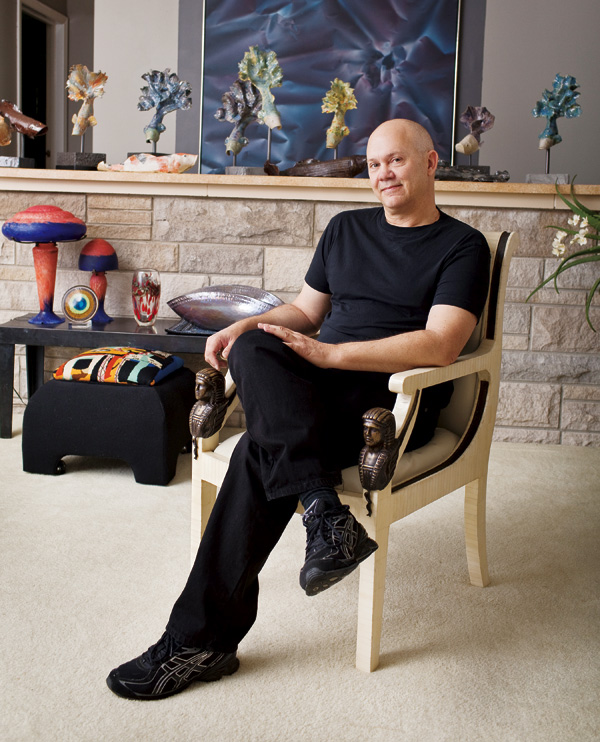 When sculptor Mark S. White works at the broad table in what he calls his “studio/dining room/family room,” he enjoys a scenic lake view. Ducks and Canadian geese are frequent visitors to White’s North Side back yard, but don’t expect them to appear in a future series: “I don’t want to be known for cute little ducks,” White jokes.

The longtime Evansville hairdresser, who works at Posh International Hair Studio, started working with clay early last year simply because he wanted a hobby. But after selling more than a dozen pieces from an exhibit at the Oaklyn Branch of the Evansville Vanderburgh Public Library and winning a second-place award at an Arts Council of Southwestern Indiana show, White takes his art a bit more seriously.

His inspiration: friend and client Lisa Heichelbech, a local ceramic artist who taught him the basics and offered use of her kiln. After a few simple platters and bowls, White — a graduate of North Posey High School and Pat Wilson’s Beauty College in Henderson, Ky. — moved on to sculpting colorful fish.

You’ve said you wanted to be a hairdresser since childhood. What was the first haircut you gave?
My very first memory of cutting someone’s hair was a little girl who lived down the street, and she had pigtails. It was a hot summer day, and she wanted those pigtails cut off, so I cut ‘em off. Her mother came to visit my mother. (Her hair) was chopped up really bad.

What did you feel the first time you touched clay?
I found it to be very peaceful and soothing. I loved the way it felt. I got excited when it was finished — it was like a present when I opened the kiln for the first time.

What’s the biggest challenge you’ve faced starting out as an artist?
Not knowing anything. Lisa would say things like, “Now let that get leather hard.” I would say, “What does that mean?” Well, that’s the simplest basic thing when you’re working with clay: That’s whenever it starts to dry and it isn’t completely dry, but yet it’s hardened up a little bit to where you can handle it. I didn’t know anything.

You started sculpting fish soon after you began working with clay. Why fish?
I always have loved the water, but I didn’t go in thinking I was going to make a fish. I rolled (the clay) out as a slab, and I thought, “I wonder what would happen if I stuck my hand under this and started to form it from underneath.” When I did that, I saw a fish. It started to come up, and it looked like a fish’s body.

What’s your approach to sculpting?
It just happens. If I put something in my head, I only can get it 50 percent because it usually tells me what it’s going to do. (My approach is) to let it happen (and see) what it feels like.

Do you have a favorite artist?
Jan van Eyck is fantastic. I saw his work when I visited the Netherlands, and it was just phenomenal. He’s a painter from the 15th century who had to mix his own paints, and his paintings are so real that they look like photographs.

How do you want to be remembered as an artist?
(I want people) to see something as striking and delicate and be left with wonder: “How is that done? How could that piece be so fragile?” The delicacy is what I want to be known for.