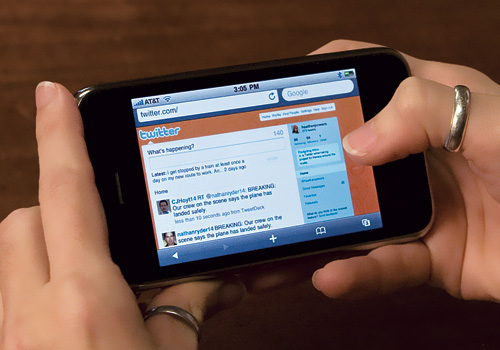 At one time or another, everyone has wished they could take back something they either said or wrote. Imagine, if you will, that you are a major network reporter and your regrettable words were published to more than a million people and these words were of an off-the-record comment said by the president (you know, of the United States of America) in which he called a major hip hop musician a “jackass,” no less. Twitter has made this scenario an all too easy occurrence for journalists.

According to the Global Language Monitor, a Texas-based company that tracks word usage on the Internet, Twitter earned the title of “Top Word of 2009.” The microblogging site delivers short messages called tweets, where users have 140 characters in which to voice something insightful, plug a new product, or simply over-share in a newsfeed-type format to followers (people who choose to subscribe to an author’s tweets). After the massive boom of new Twitter users last year (a 1,382 percent increase in one month alone according to a March 2009 Nielsen study), Twitter recognized its impact on news organizations and changed the question it prompts users to update their status from “What are you doing?” to “What’s happening?” in November 2009.

Where journalism and Twitter intersect
The debate about ethics and journalism is not a new one, and though the number of Twitter users has flatlined around 20 million, the social networking Web site appears to no longer be a trend. It’s part of our social culture.

The instantaneous nature of Twitter makes it easy to tweet without properly checking facts or gaining editorial approval. The Society of Professional Journalists offers a comprehensive list of ethical standards expected of media professionals, including: Test the accuracy of information, present both sides of the argument, and do not misrepresent stories with teaser headlines. Do the same rules apply to the Twittersphere?

Tamara Wandel, associate professor of communication at the University of Evansville, says the answer isn’t a simple yes or no. “Theoretically, there shouldn’t be a different set of ethics. But in practicality, right now there’s a huge chasm,” she says. In addition, Beth Sweeney, a local NBC news anchor, says that journalists now have the daunting task of “walking the ethical line.” “Objectivity and safe distance have always been the rule of thumb for traditional media,” she says, “but now all of a sudden we’re expecting reporters to interact with readers or viewers on a regular basis via social media.”

The brave new world of social media
As an ever-increasing number of media professionals recognizes the power of Twitter as a journalistic tool, many news organizations now require (or highly encourage) employees to use social media avenues, such as Twitter, as part of their job. The problem comes when no guidelines or expectations are set beforehand. Some people point to the now infamous “jackass tweet” mentioned earlier, which was published by ABC’s Terry Moran. The tweet in question said: Pres. Obama just called Kanye West a “jackass” for his outburst at VMAs when Taylor Swift won. Now THAT’S presidential.

This certainly isn’t the first time such a comment has been made publicly about Obama’s disdain over the temper tantrum rapper Kanye West threw on a nationally televised music awards show. What is interesting is the fact that the tweet was taken down and that ABC released an apology statement saying, “…This was done before our editorial process had been completed. That was wrong…” What are the expectations for social media use when there are few, if any, guidelines. (Continued on page 2) [pagebreak]

Twitterisms and what they mean:

To tweet or not to tweet
Almost as good a question as “What should you tweet?” is “What’s off limits for journalists?” Several national media outlets have come under fire in previous months for instituting draconian guidelines for staffers’ use of Twitter and other social media sites. Last September, The Washington Post laid out strict regulations for employees:

Post journalists must refrain from writing, tweeting, or posting anything — including photographs or video — that could be perceived as reflecting political, racial, sexist, religious, or other bias or favoritism that could be used to tarnish our journalistic credibility. This same caution should be used when joining, following, or friending any person or organization online.

Local media guidelines aren’t as rigid. In fact, Hot96’s morning show co-host, Atom Smasher, says he has no rules regarding what topics he tweets about. “I tweet about pretty much whatever is going on on the show as well as my personal life, which is a lot of the show,” he says. “The lines are blurred frequently.” He says that his tweets do not go through an editing process, and he does not have to submit them for review. If you follow @AtomSmasherShow, you know this is true, and to be fair, Smasher isn’t a journalist as much as he is a deejay with a knack for silly statements: Atom’s “been slacking today on posting. Please forgive me and/or whip me with a wet spaghetti noodle.” (Posted Feb. 5.)

Beth Sweeney, 14 News Sunrise anchor, says that while there are general guidelines regarding tweeting in place at her news station (such as be positive and avoid controversial topics), the general rule of thumb is to use the same guidelines for Twitter as television. “I treat it the same way I would if I’m on air,” she says. “When it comes to breaking news, I want to be first, but I also want to be accurate.”

The interactive appeal of Twitter is undeniable. Historically, journalism has been more of a one-way conversation: Readers read what newspapers print, listeners hear what deejays say, and viewers see what broadcasters display. Never before have journalists had such an instant and intimate connection to followers. Sweeney says that Twitter is also a great way for viewers to get to know on-air personalities. She not only tweets about the news but also about her interests such as University of Kentucky basketball, running, and The Biggest Loser reality TV show. The Sunrise show on 14 WFIE has even added a segment in order to incorporate more interactivity with viewers. Sweeney explains that she poses questions on Facebook and Twitter about daily hot topics and reads followers’ comments and suggestions on air. This takes citizen journalism to a whole new level.

Recent research
According to a 2009 study of more than 400 journalists across the nation conducted by Wandel, online media is gaining credibility in the eyes of journalists. Her research shows that more than half of all journalists say their use of Twitter as a tool for journalistic work increased over the past year. Forty-two percent said they use Twitter as a means to disseminate the news, and almost half (48 percent) use Twitter as a way to monitor discussion on a story idea or topic. Wandel’s research also shows that almost 40 percent of journalists have quoted bloggers and 35 percent have incorporated citizen-generated videos.

Undoubtedly, ethics in tweeting will continue to be a hot topic for those in the media, but for now it’s safe to say public figures will add more caution to their statements — on or off the record.