Food culture is a term most often used to refer to practices and beliefs associated with making, serving, and eating food. And it’s something Pangea Kitchen owner Randy Hobson is passionate about.

“I’ve always loved food and cooking,” says the Vincennes, Indiana, native. “This place came from my desire to give back and bring something different to Evansville.”

For 25 years, Hobson worked at Berry Plastics, traveling the U.S. and the world. It was during this time he experienced the many different food scenes in large cities. Once he retired, he knew he wanted to work to bring a very authentic, yet different dining experience to Evansville. That dream was realized when Pangea opened in the spring of 2016 in the Brinker’s plaza on Green River Road.

“The restaurant itself is a compilation of different things I’ve seen in my travels, things I’ve liked, which I pasted together into what became Pangea,” he says.

The two dominating food selections seen on the eatery’s menu are Thai and Italian — not two cultures one would think to put together, but for Hobson and his crew, it’s the principles of these two food cultures that make them similar.

“Thai and Italian are so simple,” he says. “It’s all about the ingredients. If you can get the right ingredients, you can make wonderful food.”

Ingredients are the main focus of all of the dishes offered at Pangea, from the selections that start the meal to the desserts that round it out.

“That’s where we don’t short ourselves,” says Hobson. “We import food from all over the world as well as make many products in-house to make sure we are bringing an authentic experience.” 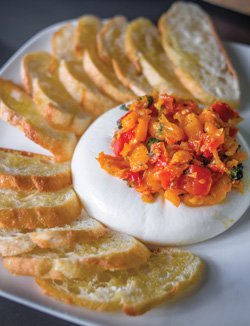 The burrata toast appetizer is nothing more than fresh mozzarella sheets (made in-house at Pangea), formed into a purse andfilled with ricotta, stracciatella, and cream. However, this creamy cheese concoction, topped with roasted tomatoes, is a delightful mix of flavors perfect for a warm slice of toasted bruschetta bread.

Pangea’s pizza menu showcases a delicious selection of wood-fired pizzas made in the old Neapolitan tradition. Pangea’s pizzaiolo Eric Luna serves up margherita and pancetta pies that rival the best in Naples, Italy.

“The compliment that makes me really happy is ‘I haven’t had a pizza like this since I was in Naples,’” says Hobson. “It’s real Neapolitan pizza and people who understand that really appreciate it.”

A customer favorite is the pistachio pizza. Starting with a pistachio puree as a sauce, this dish combines house-made mozzarella, sausage, basil, and Mike’s Hot Honey for a savory pizza with a touch of sweet.

“I love it because I basically developed that in my backyard, messing around with friends and family,” says Hobson.

Earlier this year, Pangea introduced a deep-dish, Detroit-style pizza. A 10-inch by 14-inch pie that can serve three to four people, customers can choose from eight Pangea specials or build their own. 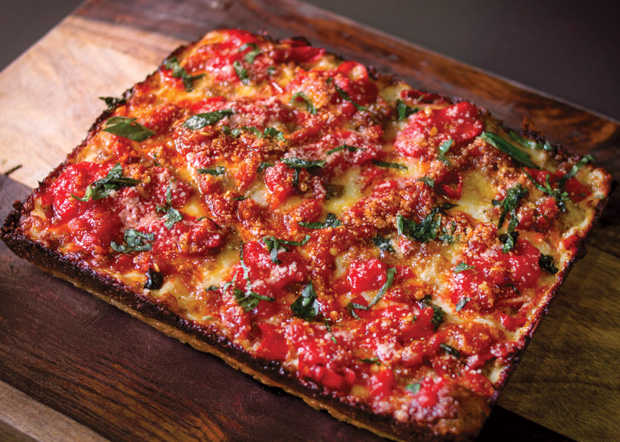 ▲ Buon Appetito! Menu choices include tasty but simple Thai and Italian dishes. The Diavola Detroit-style pizza, above, is a deep-dish pie with a spicy kick. The burrata toast appetizer, above left, is a creamy, cheesy way to begin your meal.

On the Thai side of the menu, the Pad Ke Mao — also known as Thai drunken noodles — is a crowd favorite. Pangea makes their flour-based noodles in-house and incorporates them with stir fried bok choy, wild ginger, fresh peppercorns, and garlic. Customers also can add a protein like chicken, pork, or tofu.

“One of our unsung heroes is the Kao Soi. It’s a curry noodle, more like a soup,” says Hobson. “It’s such a fortifying dish with so much flavor and different elements.”

“We have people who are very, very skilled here,” says Hobson. “We have a great team. You give a talented team great ingredients and good things happen.” 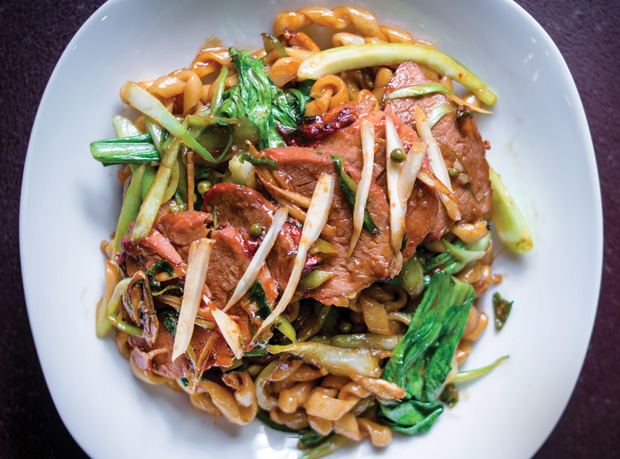 ▲ Pad ke mao with pork, above. Gelato with house-made waffle cone, below.

When it’s time to wrap up a meal at Pangea, many people take a trip to the gelato and pastry bar, where Sarah Bruggeman’s delicious dishes and gelatos make for mouth-watering desserts. Italian classics like cannolis, tiramisu cups, and biscotti are displayed with assorted cookies, tarts, and crème brulee. Each day, Pangea also offers up to 12 flavors of gelato from raspberry cheesecake and mint oreo to biscotti caramel, watermelon sorbetto, and everything in between.

And then there are the macarons. 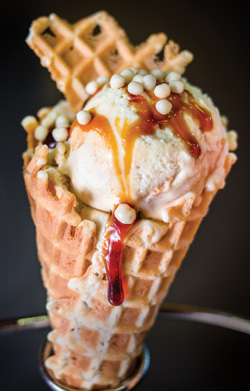 “It’s funny because my pastry chef and I were in New York. We were going to these places, and there were macarons everywhere,” says Hobson. “It was her idea to bring them here, and I was one of her biggest skeptics. Now, it’s one of our biggest sellers. People have seen them in France or big cities and are surprised they are here.”

With the success of the menu — and the restaurant as a whole — Hobson has decided to expand Pangea’s space with a bar and private dining area. The new bar area seats up to 38 people while a private room holds up to 40, perfect for special occasions, business meetings, or small parties. Hobson plans to add more items to the menu, as well.

“We will have more bar-type foods and different snacks,” he says. “Things that are Thai or Italian. They won’t be your typical chicken wing.”

Hobson also has plans to introduce fresh pasta into the Italian menu, featuring noodles he plans to make in-house.

“We’re doing a lot of testing, and we’re really excited about it,” he says.

Apart from the unique dishes created and served by Pangea, Hobson’s passion for food culture goes beyond providing a new element. He also finds a drive in expanding it, especially with younger generations.

Hobson and his staff work with organizations like the Boys & Girls Club as well as local schools to bring interesting food experiences to young people who may not have the opportunities to taste diverse dishes.

“We work to get some of those kids who are passionate about food to come work and teach them about food,” says Hobson. “In five years or so, those are the people who are going to have the restaurants and develop that food culture in Evansville.” 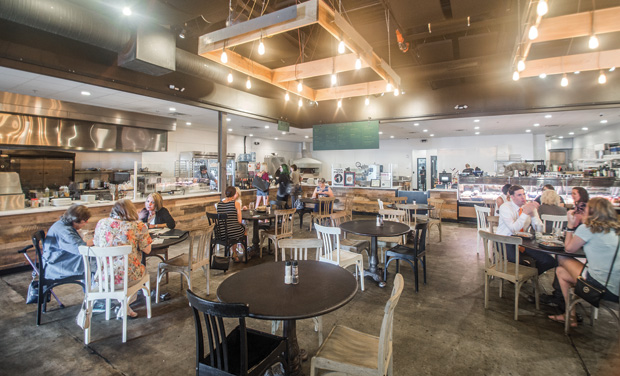 In the end, it all comes back to the food for Hobson. From taste testing during his personal travels to planning menus that educate customers, he stays true to the passion of food culture in Evansville.

“Food is the universal language. They always say that, but it’s so true,” says Hobson. “People gather around food. That’s what the Pangea idea is — coming together.”