Tri-State families huddled around their TVs Dec. 14 for another week of Monday Night Football on ESPN. While the crowd watched the Cleveland Browns and Baltimore Ravens trade rushing touchdowns, analyst Brian Griese talked about Evansville.

“Yeah, I knew about Evansville,” he says, prompted by an on-screen graphic. “That’s where my dad (Bob Griese) is from.”

But Griese’ reference was about more than family ties. The game’s nine rushing touchdowns had only occurred two other times in NFL history and one took place right here in the River City.

It all started in 1921 when local businessman Franklin Fausch traveled to Chicago and secured Evansville a team in the recently formed American Professional Football Association — now the NFL.

Eventually a star player and coach of the Evansville Crimson Giants, Fausch led the team until 1922 when scheduling difficulties and financial problems, along with Evansville’s baseball preference, led to the team’s disbandment. Only three teams out of the 18 in the APFA would stand the test of time — the Chicago Bears, Green Bay Packers, and Arizona Cardinals. 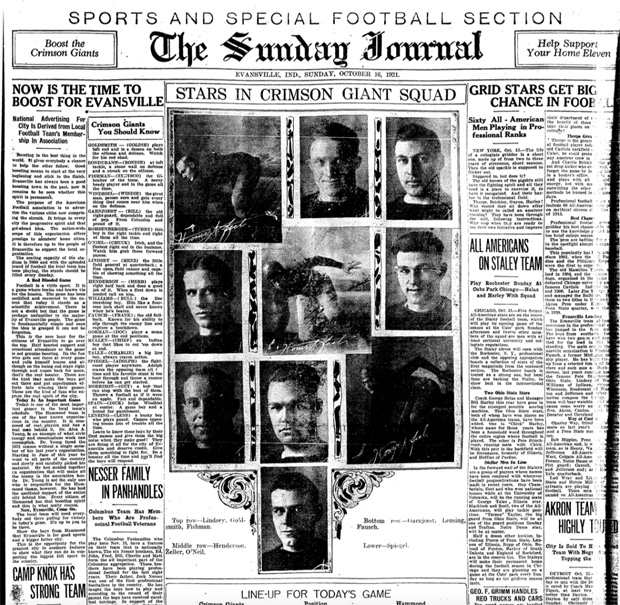 This isn’t the first recent mention of the Crimson Giants. FOX also discussed the Evansville team on Nov. 29 when the Atlanta Falcons took down the Oakland Raiders with a 43-6 score, which was the first time that score had happened in the NFL since the Crimson Giants’ 43-6 loss to the Packers on Nov. 6, 1921.

While the Crimson Giants may seem to be remembered only for their historic losses, finishing their time in the league at 3-5, their reputation isn’t all bad.

Optimistic about the team’s bright start, the Evansville Sunday Journal rallied fans and featured the Crimson Giants, including Fausch and right half back Herb Henderson, on Oct. 16. 1921.

“Learn to know these boys by their first names and give them the big noise when they make good! They are doing it all for the city of Evansville and deserve credit. Give them something to fight for. Be a booster all the time and you’ll find the boys will respond.”