Sounds of the Season

It’s a tradition many have come to love and anticipate during the holiday season — the Evansville Philharmonic Orchestra’s annual performances of Handel’s “Messiah.” This year, the way the performance is viewed may be different, but the magic of the event still remains.

"Handel’s Messiah has become an annual tradition in Evansville for many years. I am thrilled to be conducting this monumental work with the amazing musicians of the Evansville Philharmonic and Chorus," says EPO Music Director Roger Kalia.

The one-hour performance brings together the baroque-size orchestra of the Philharmonic along with the voices of the Evansville Philharmonic Chorus fand two accomplished soloists. The idea is to recreate a traditional setting for the well-known 18th century musical piece. Highlights of the performance include “For Unto Us a Child Is Born,” “The Trumpet Shall Sound,” and the famous “Hallelujah Chorus.”

"The reduced orchestra and chorus will enable us to create a performance that is more reminiscent of what Handel would have heard in the 18th century," adds Kalia. "The live stream will make it possible for even more people to view this beautiful music from the comfort and safety of their own home. During this holiday season, we are so pleased to be able to share the uplifting and healing power of music, which will hopefully bring you peace and comfort." 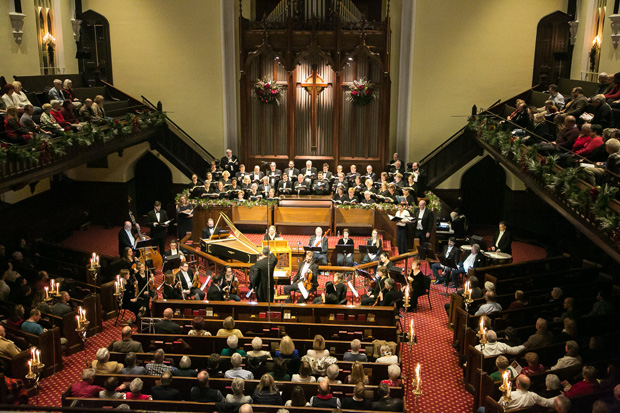 This year’s soloists are soprano Andrea Drury and baritone Corey Crider. Director of the Evansville Philharmonic Chorus, Drury received her bachelor’s degree in music education from Baylor University and her master’s in music in vocal performance from Ohio State University. She also is currently the fine arts specialist for choral and general music and theater for the Evansville Vanderburgh School Corporation and serves as the choral director for the Trinity United Methodist Church. She has sung with orchestras and opera companies across the U.S., taking on roles such as Mimi from “La Boheme” and Violetta from “La Traviata.”

Crider is a two-time national semi-finalist in the Metropolitan Opera National Council Auditions and an alumnus of the Artist Diploma program at the University of Cincinnati College-Conservatory of Music. He holds master’s and bachelor’s degrees in music from the University of Kentucky and Murray State University, respectively. His career has included roles such as Malatesta in “Don Pasquale” with the Lyric Opera of Chicago’s Ryan Opera Center and Marcello in “La Boheme” with Arizona Opera and the Munich Philharmonic.

The EPO’s livestream performance will be at 7 p.m. Friday, Dec. 18. Tickets are $15 and can be purchased by visiting evansvillephilharmonic.org or calling the EPO ticket office at 812-425-5050.