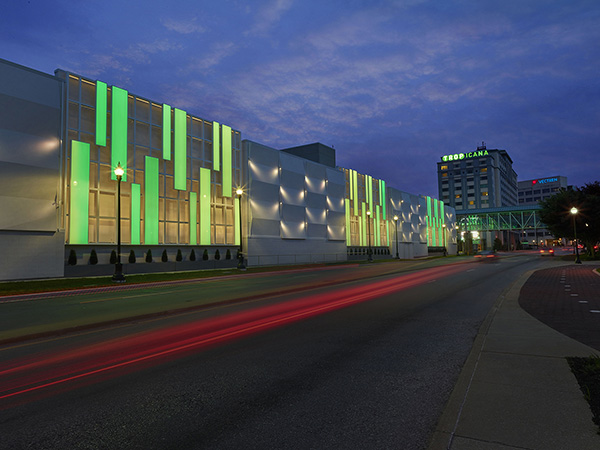 A long-standing establishment of Downtown Evansville, the Tropicana Casino along Riverside Drive may see another change coming its way by the end of the year.

The last five years have seen many changes to the tourism destination. In 2017, Evansville Business covered the casino’s move from water to land in the story “Land Ho.” Then, three years later, Tropicana Entertainment Inc., the parent company of the Evansville casino, sold the hotel and gaming properties to Eldorado Resorts. Now, the casino looks to change hands again.

In July, Eldorado Resorts received approval from the Indiana Gaming Commission (IGC) to complete a merger with Caesars Entertainment Corp.’s Indiana properties — Hoosier Park in Anderson, Horseshoe Casino in Hammond, Indiana Grand in Shelbyville, and Caesar’s Southern Indiana in Elizabeth. IGC established two requirements as a part of the approval, however.

Amid concerns the acquisition places too much concentration of Indiana gaming properties under the umbrella of Eldorado, IGC has required the company to divest at least two properties in the state by Dec. 31, 2020. The merger puts Eldorado in control of 50 to 60 percent of gaming revenues in the state, according to IGC, and selling two would bring that percentage below 40.

With the announcement, Eldorado Resorts Chief Executive Thomas Reeg stated Tropicana Evansville and Caesar’s Southern Indiana casinos are on the block for sale, with Horseshoe Casino being a third possibility. The Federal Trade Commission also has required Eldorado to part with properties in Nevada and Louisiana to avoid anti-competitiveness in those states.

As of now, there is no word on who could acquire Evansville’s casino or if there are any interested parties.