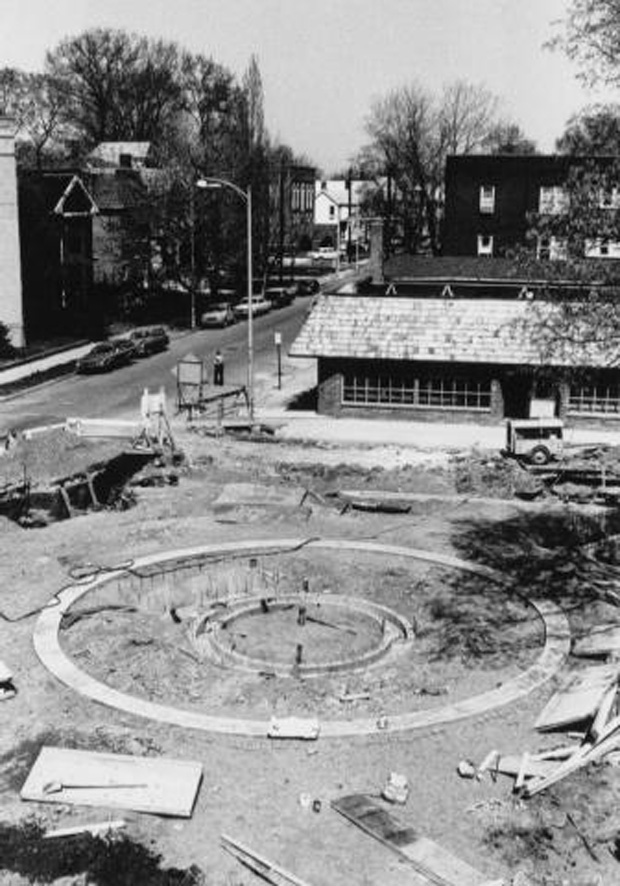 Haynie’s Corner Arts District always has been a cultural hub in Evansville. Home to several popular businesses and dining establishments over the years, Haynie’s Corner has had many different looks.

One of the most significant physical changes to the corner at Second Street and Adams Avenue was the construction of a fountain in 1978. A photo from the Willard Library Archives shows the foundation and pipes of the installation, at the epicenter of the district, being laid out.

Haynie’s Corner gets its name from George Washington Haynie, the owner of a local drug store on the corner from the late 1800s to 1920s. Haynie also was the police commissioner, water works and safety board member, and president of Indiana Druggist Association.

His drug store oversaw the fountain’s current location from its Second Street building, across from the Alhambra Theater. Destroyed by the Ohio River Valley Flood in 1937 and a fire in 1944, the store is among the relics of Haynie’s Corner’s nostalgic past.

Luckily, the area’s future remains bright. Since the construction of the fountain, many trendy bars and restaurants and other art instillations have come to the neighborhood. In October 2006, the City Council granted the formation of the Arts District. In 2012, the Department of Metropolitan Development designated the Haynie’s Corner Arts District as a Neighborhood Revitalization Strategy Area.

The Art District also hosts First Fridays, monthly events which feature food trucks, local vendors, and live music from 5:30 p.m. to 9 p.m. on the first Friday of every month from May through October.

While the iconic fountain may be shut off for the winter season, it remains a symbol of the corner’s historic past and rich artistic future still to come.