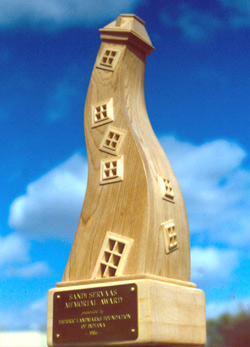 largest city in the nation. It’s bigger than San Francisco, Seattle, Denver, and Washington, D.C. Like most large U.S. cities, Indianapolis is a city of neighborhoods. In September, at the Indiana Landmarks annual meeting where the annual Servaas Memorial Awards are given, I learned about Historic Woodruff Place.

James Woodruff platted the area on the near east side in 1872 as an 80-acre suburb of houses in a park-like setting. Just a mile from downtown Indianapolis, Woodruff Place was the inspiration behind Indianapolis native Booth Tarkington’s successful novel, “The Magnificent Ambersons.” The neighborhood is bounded on the west the campus of Arsenal Technical High School, which opened in 1912 on the former site of the Indianapolis Arsenal.

“It’s a miracle that so much has survived, and a tribute to the residents and the all-volunteer Historic Woodruff Place Foundation,” remarked Shepard.

Recipients receive the Memorial Award sculpture, “No Doors to Lock out the Past,” by Evansville artist John McNaughton, as well as a cash prize. McNaughton carves the sculptures in batches of 20 or 30 to supply Indiana Landmarks with the coveted annual award. 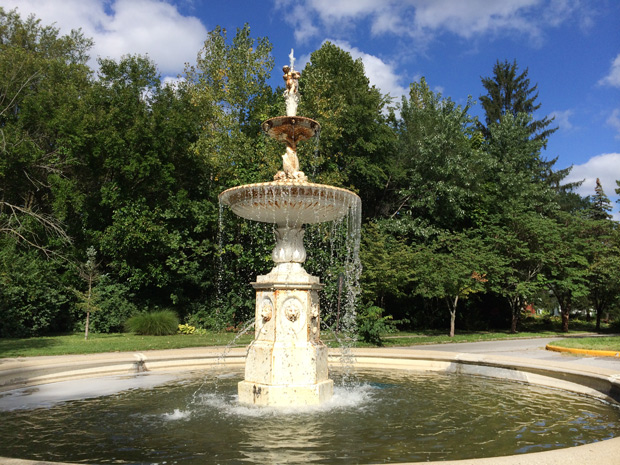 “I like the idea of being a Fountain Head,” said Shepard. “The Fountain Heads maintain three large and six small fountains. They keep the pumps, plumbing, paint and seals in shape. Then there’s the Light Brigade, volunteers who repair, repaint and maintain the beautiful streetlights that the city had proposed replacing.”

In 1972 Woodruff Place was added to the National Register of Historic Places.