From Rags to Riches

For 30 years, the home at 805 E. Chandler Ave. sat vacant along historic Bayard Park. Nature reclaimed the yard, a large catalpa tree grew inside the chimney, and the original roof decayed, leaving a 4-foot-wide hole straight into the basement.

But when Tammy Harber, Indianapolis native and owner of Opie’s Doggie Playcare and Salon, happened to drive by in 2016, she knew she had to own it.

“I want to impress on people that a home with so much character needed to be saved,” she says. “It was love at first sight and it didn’t matter to me what had to be done inside.”

A Boonville, Indiana native, Bullock was bit by the renovation bug many years ago. She met Harber in 2007 and the two bonded over their passion for restoration. 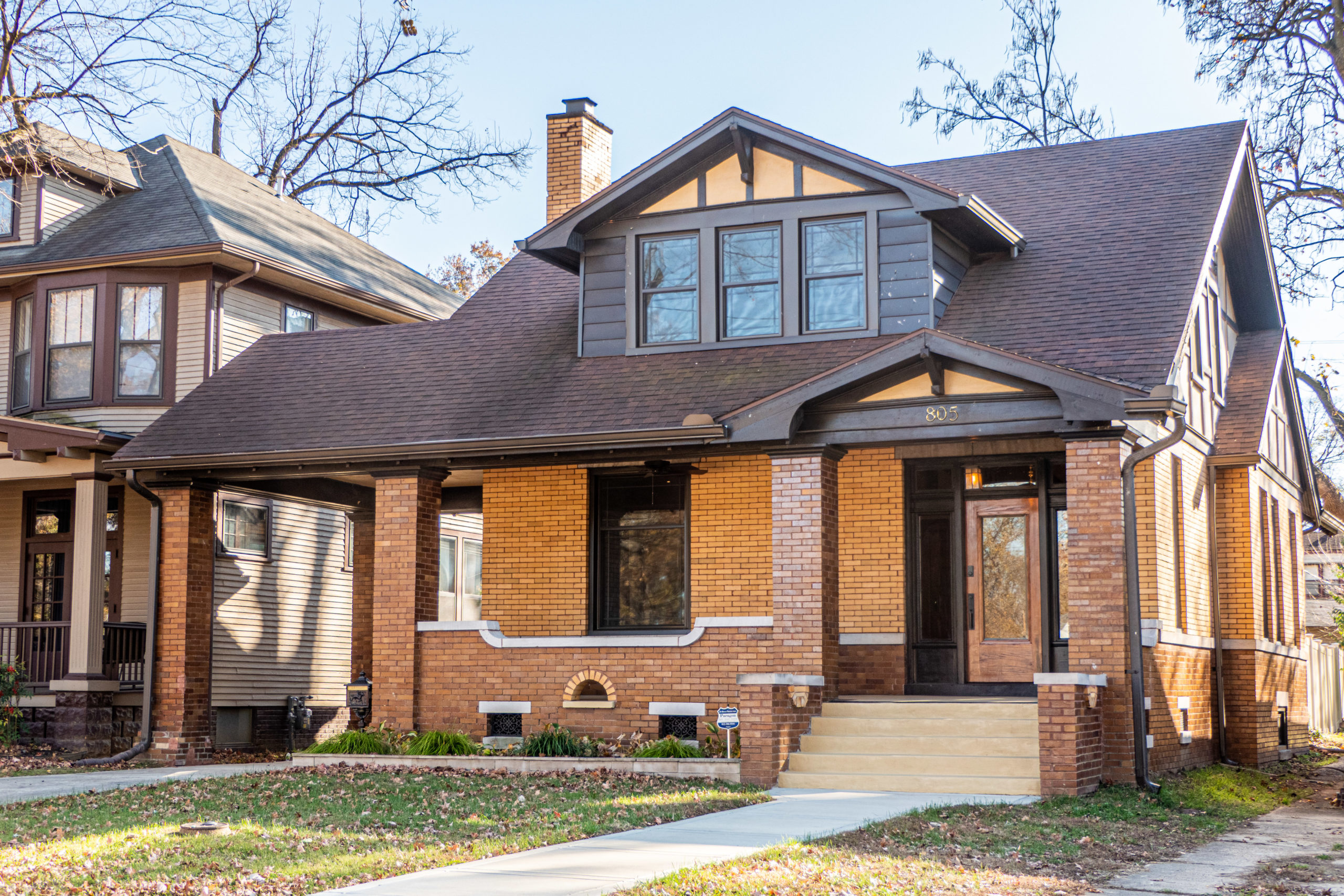 “It was a matter of finding the right house and the timing being right financially for me,” says Harber.

Once the place to be in Evansville, the Olde Towne neighborhood has become the target of many city-led projects to save or raze crumbling historic homes.

Built in 1912, 805 E. Chandler was added to the National Historic Registry in the 1980s by City Historian Dennis Au. Known as the Brown-Sparrenberger house, it was built by local contractor James Brown for his family and business. Later, prominent Indiana University attorney William H. Sparrenberger owned the home.

Originally featuring six bedrooms, one bathroom, and adorned with a red and gray slate roof, the home stood out from its neighbors. According to Harber, its yellow and chocolate glaze two-toned triple brick exterior is the only one of its kind in Evansville. 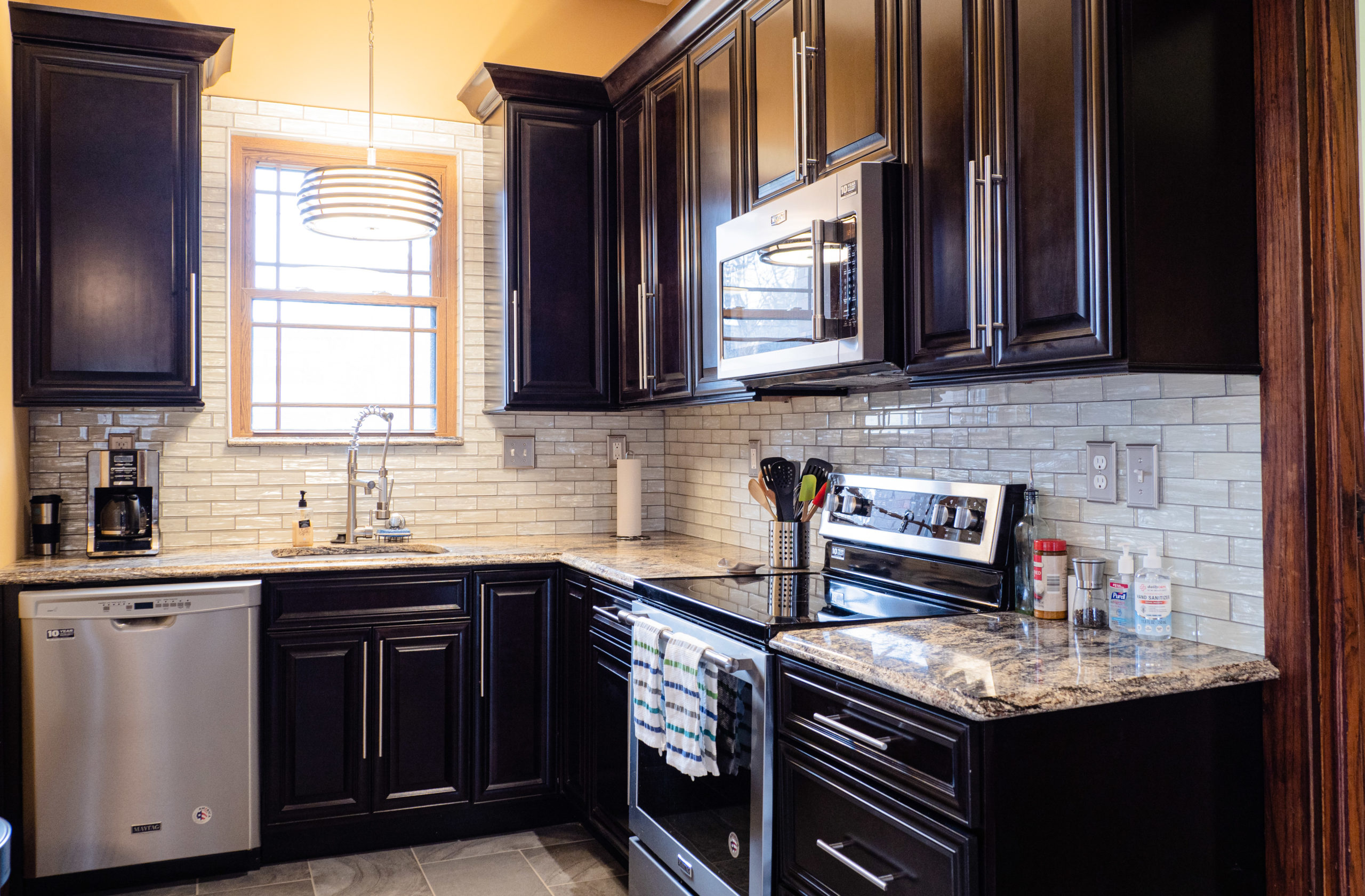 The second floor was likely built without a floor plan as walls run directly into windows and the rooms are broken into uneven dimensions with sharp angled ceilings. The home’s unique features combined with the opportunity for updates aided Harber’s vision of the restored historic building to, perhaps even above, its former glory.

After an initial purchase of the home fell through in May 2016, Harber stepped in and bought 805 E. Chandler from the city for $23,000. While a new roof had been installed the rest of the house remained in shambles. So, Harber began the long road to renovation immediately.

Harber and Bullock could not have known it would take four years and more than $100,000 to restore the house. But they both still agree — they would do it over again if they had to.

“It breaks my heart when I see a home being torn down,” she says. “People loved this home in 1912 — as a city we need to put more emphasis on saving things that have historic value.”

While they’ve had difficult projects in the past, keeping the character of the home balanced with modern updates and an eclectic feel was challenging. Still, the real difficulty was the floor plan and functionality of the home.

“This home, for all intents and purposes, is a new home,” says Harber. “This was a complete down to the studs rebuild. [Angie] has the ability and knowledge to know what’s structurally feasible and once we got the layout then that’s where design came in.”

Bullock and Harber completely reimagined 805 E. Chandler. Six bedrooms became three, a master suite on the first floor and two on the second, and they added a second bathroom with a laundry room. 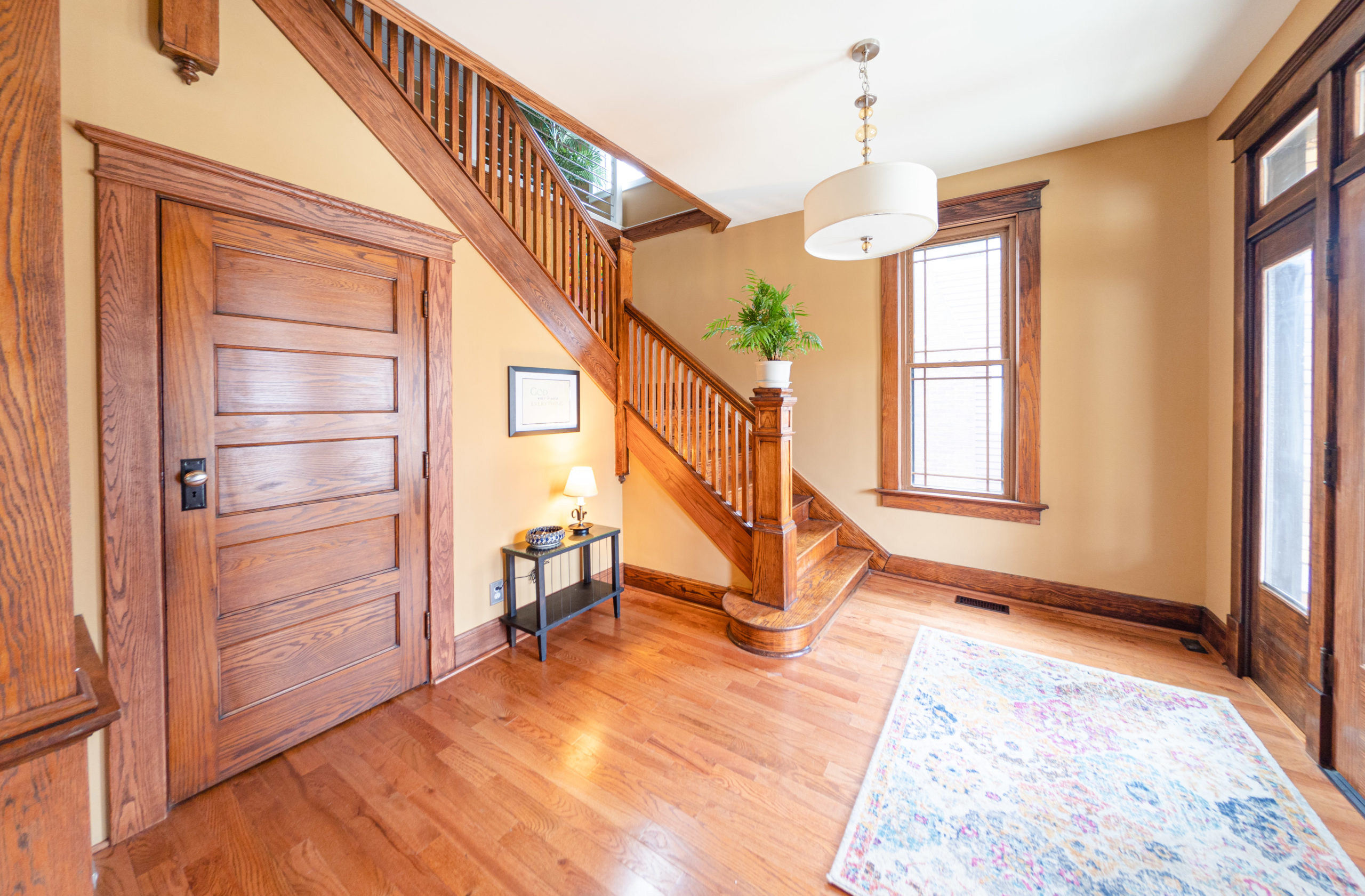 They removed the chimney to create a full dining room, painted the front porch and back patio, and designed custom railings on the stairs. Harber found new doors to match the original oak colanders, door frames, window seat, and staircase. She commissioned a carpenter to create a custom red oak front door and utilize the original glass detailing.

Meanwhile, Bullock fielded bids to redo the electric, plumbing, and total HVAC systems. She also fixed the hazardous hole in the floors and removed the interior kitchen chimney and wall, creating a new rear entrance and relocating the basement door and start of the concrete stairwell, so a full kitchen could be installed.

“It wasn’t intended to be a flip,” says Harber. “I sold it because I have a small business and I work 78 hours a week. I couldn’t fully appreciate [the house] because I was never there.”

In a happy twist of fate, University of Evansville alum and former Executive Director of the Evansville Convention and Visitors Bureau Tom Heaton had returned to Evansville from Westfield, Indiana to accept a position as the business development director for Kahn, Dees, Donovan & Kahn law firm just as the home went to market.

“I walked in and it just felt right,” he says. “There was a feeling of getting a home with a hundred-year-old charm, yet plumbing, electric, and all the kinds of things you worry about, are renovated.” 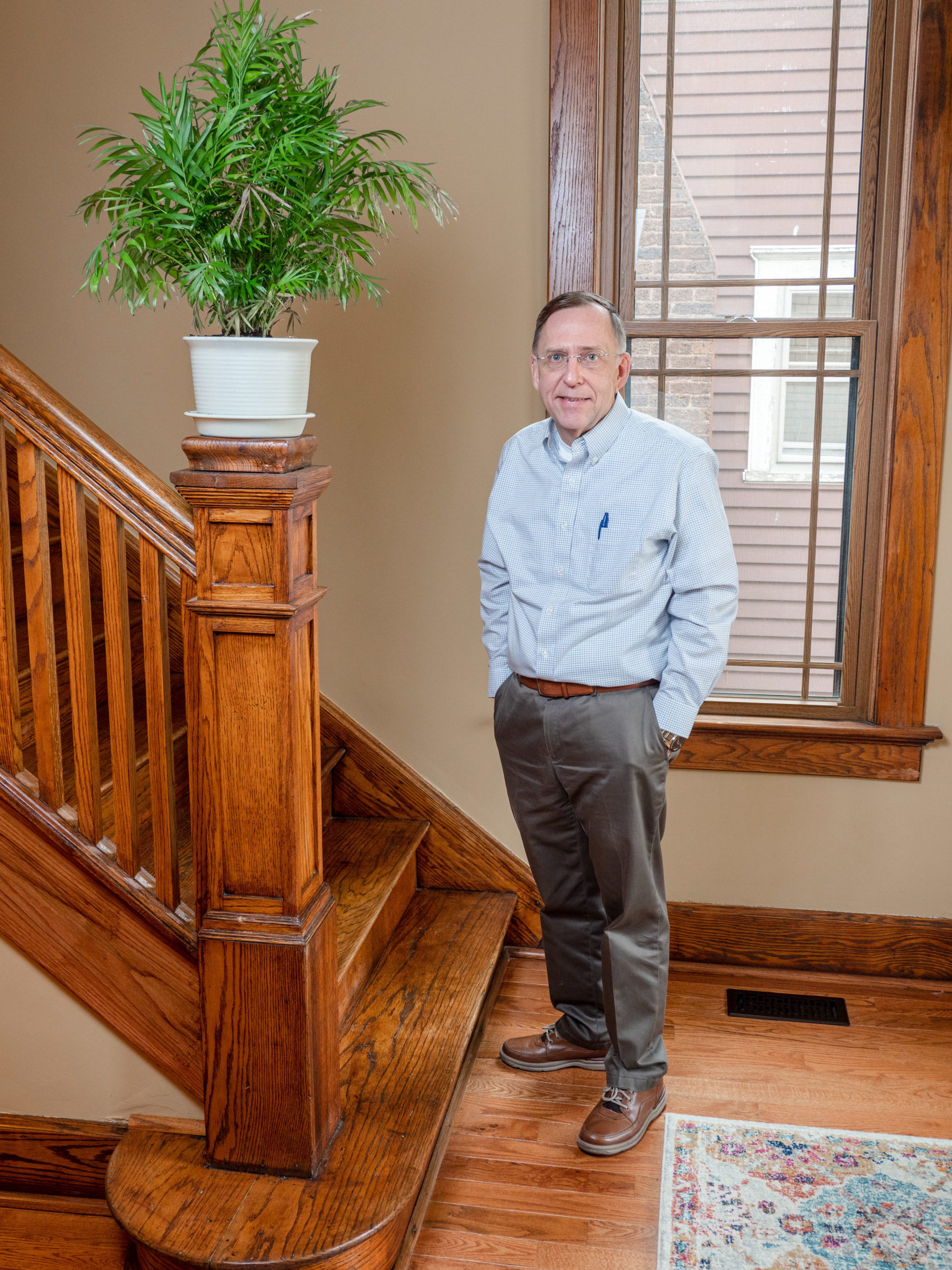 A pastor of the United Methodist Church, Heaton founded Mission Guatemala and spent 10 years living there on and off since 2009. With his own home sold in only a day, Heaton was looking for a picture-perfect historic residence. Thanks to Harber and Bullock, he got one.

On Oct. 18, Heaton toured the house before making an offer. On Nov. 19, they closed the deal and Heaton was able to move in before Thanksgiving weekend.

Heaton primarily lives on the first floor with his white hound mix, Buddy. A Cincinnati native, he now has a perfect view of the changing neighborhood, which Harber and Bullock continue to improve.

“Saving homes in Evansville and bringing them back to their original beauty is our passion,” says Harber.

The duo has already moved on to new projects. Harber spends most of her week at Opie’s while Bullock begins construction on another Olde Towne home — the third home they’ve renovated together.

“We kind of bounce off each other,” says Bullock. “It’s teamwork and our main goal is to bring up this area.”