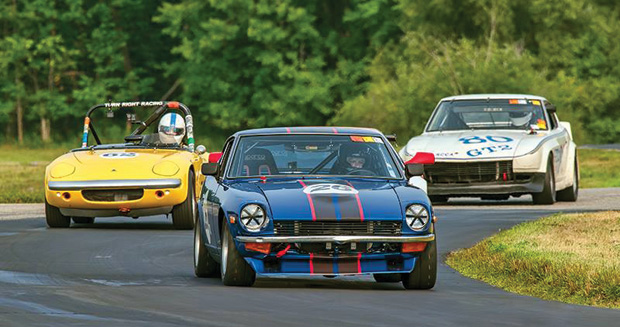 “You want to go as fast as you can, but you don’t want to be reckless about it,” says the commercial real estate agent and Evansville resident.

For Hyatt, his foray into racing is all thanks to his 1974 260Z Datsun racecar. In 2007, a friend passed along to Hyatt that a man in Owensboro, Kentucky, had the car sitting in his junkyard. The car sported a rough gray undercoat that wasn’t aesthetically pleasing; however, the bad paint job helped save the Datsun from rusting terribly.

“That’s what made it worthwhile, to be honest,” says Hyatt. 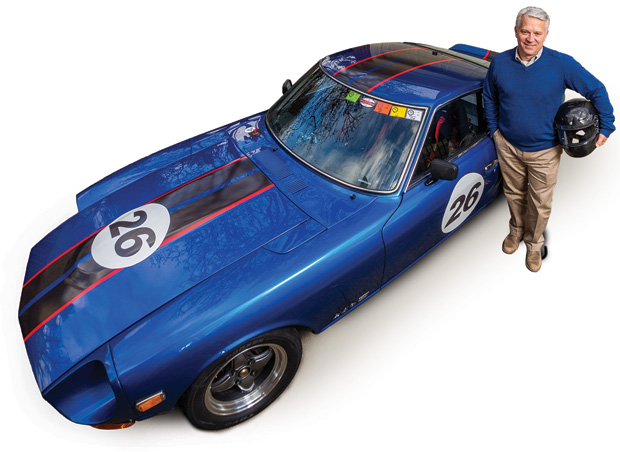 The Datsun 260Z had a run in the U.S. markets only for the 1974 model year. It was the second model released as a part of Nissan Motors first generation Z GT two-seat coupes. In the 1970s, the Z series found success on the Sports Car Club of America race circuit with notable drivers of the time, even Paul Newman.

Hyatt has spent the last seven years restoring his 260Z to racing quality. Much of the work he did on his own, save a few items such as the engine (rebuilt by a man in Chicago) and the blue paint job, which harkens back to the first 260Z he had in college.

After completing the work in early 2017, Hyatt took the Datsun to his first race, Ginger Man Raceway in South Haven, Michigan. After that, he went to gear head heaven — Road America in Elkhart Lake, Wisconsin. There, he races the Datsun in events sponsored by the Vintage Sports Car Drivers Association, of which he is a member. The group is a nonprofit club that organizes vintage race events for members. Hyatt calls them gentleman races.

“The theory about vintage racing is you run at about 90 percent of your capability. You don’t win any money or trophies. You don’t even get a ribbon,” he says. “It’s just seeing what you can do.”

But that’s what makes the gentleman racing so fun, he says. The people are diverse, the track is beautiful, and the event is fun.

▲ In 2018, he raced the car at Road America in Elkhart Lake, Wisconsin.
Share
Facebook
Twitter
Previous article
Hot and Cold
Next article
Kings of the Court