‘Go For Your Dreams At All Costs’ 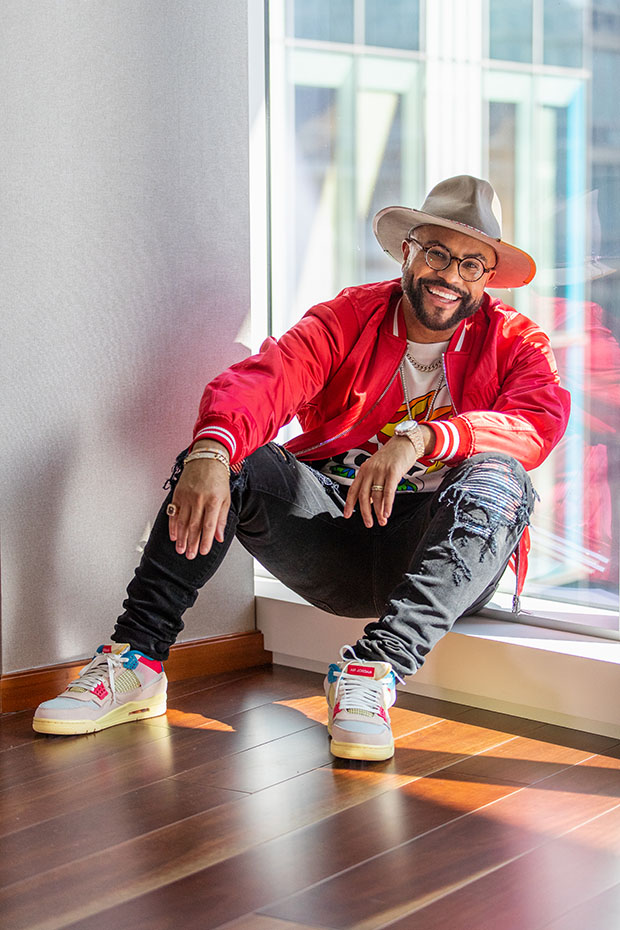 Editor’s note: This is an extended version of the feature story about Philip Lawrence that ran in the July/August 2021 issue of Evansville Living.

Philip Lawrence may be a big name in the recording industry, but there’s no place on Earth that loves him more than the River City.

The Evansville native — one half of the creative success behind recording artist Bruno Mars — has Grammy awards on his shelf, hours of hit singles on the radio, and two Super Bowl halftime show appearances under his belt. His songwriting for Netflix’s 2020 Christmas movie “Jingle Jangle” has been widely celebrated. He’s recently founded a new company to help launch new musicians. And through it all, he traces his impressive success to his southern Indiana roots. 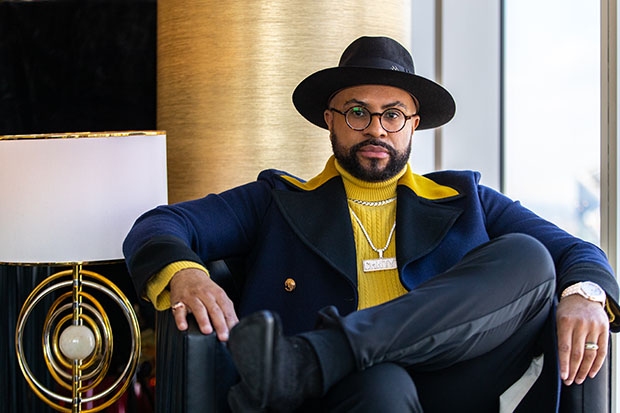 Lawrence, 47, was born into a family of performers. His mother Cheryl is a singer and directed the Sounds of Grace choir at Grace Lutheran Church. Father Phil Sr. was a well-known disc jockey and emceed local talent shows, notably the Black History Month Talent Show at the old Vanderburgh Auditorium, now the Old National Events Plaza. His second cousins Gina Moore and Joan Moore-Mobley perform as R&B and blues duo The Browne Sisters. Siblings Shane and DeVonna are gospel and inspirational music recording artists.He first tasted success at age 6 while performing at one of his father’s talent shows in the early 1980s. Dressed in sharp blue outfits, Lawrence and his siblings sang “I Am A Promise” — prophetic words, they would prove to be — and took home the show’s top prize.

“That was a very memorable moment in my life,” Lawrence says. “That sort of began our performing career.” 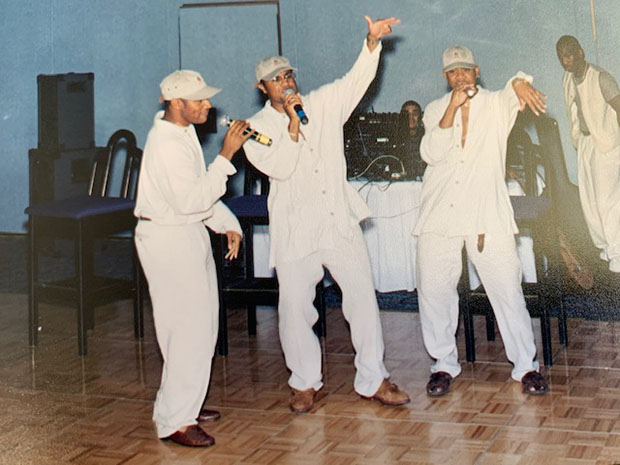 The Lawrence trio became so successful on the local talent show circuit that organizers eventually, gently, asked if the children would perform a showcase instead of competing, something the three leapt at.

“The world was their stage,” Cheryl says.

A baritone, Lawrence honed his talent at home and on the road. It was around the time of that fateful first performance that Cheryl began directing Sounds of Grace, and the siblings — as part of the children’s choir Grace Notes, under the direction of Brenda Piper — accompanied their parents on the singing troupe’s tours throughout the U.S.

Also a talented dancer, a 10-year-old Lawrence was recruited to help Piper choreograph the dance numbers in a Tekoppel Elementary School production of “Snow White and the Seven Dwarves.”

“I knew he had talent then,” says Piper, a longtime family friend who is also the Lawrence siblings’ godmother. “I said, ‘Philip you’ve got to help me do this play!’ And he had them poppin’ and lockin’. It wasn’t just regular dance moves; each dwarf did their own thing.”

“I sat my parents down and said, ‘I don’t think that school is going to be the pathway for me,’ because while I was in school, I was starting singing groups. I was writing songs. I just wasn’t going to class. I wanted to do music,” Lawrence says. “I said, ‘Let me just get out and do what I think I’m supposed to do.’ My dad said, ‘Can you give us one more semester and just see if that’s really how you feel?’ I said, ‘I can do that. Maybe I’m wrong and maybe college is it, and maybe I haven’t tried hard enough.’”

When that final semester proved — “very loud and clear,” Lawrence says, laughing — that college wasn’t for him, “My dad said, ‘Oh yeah, boy, please get out of there.’” 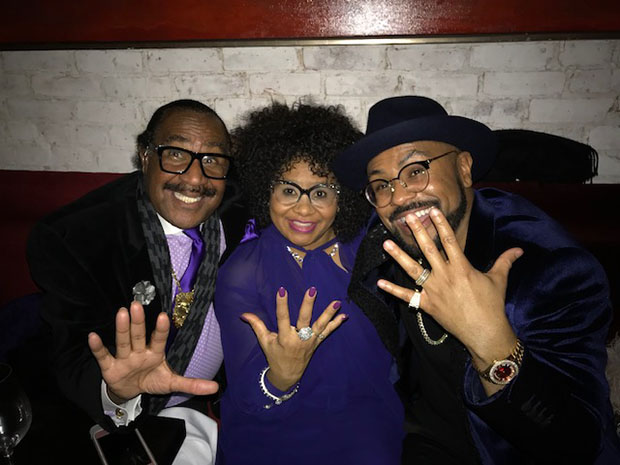 Lawrence’s path to stardom then went through a brief stint acting at a North Carolina museum; singing with brother Shane and fellow Evansville native Carlos Ware at Universal Studios in Orlando, Florida; and landing a coveted emcee job at Walt Disney World.

After a successful career in Florida, Lawrence made the leap to California in the early 2000s to begin work a record producer and songwriter — a journey that included many false starts, dwindling finances, and dimming hopes. Meeting another struggling artist named Bruno Mars changed everything: With Ari Levine, Lawrence and Mars formed the songwriting and producing team The Smeezingtons and struck gold writing top-10 hits like Flo Rida’s “Right Round,” B.o.B.’s “Nothin’ On You,” Travie McCoy’s “Billionaire,” and Cee Lo Green’s “Forget You.” After parting ways with Levine, the friends launched Mars as the face of their wildly successful creative team; Lawrence co-wrote and performed on Mars’ first three studio albums, earned eight Grammy awards, and embarked on multiple global-trotting tours. More recently, Lawrence completing hosting duties for “Come Dance With Me,” a new dancing competition slated to air on ABC this fall. 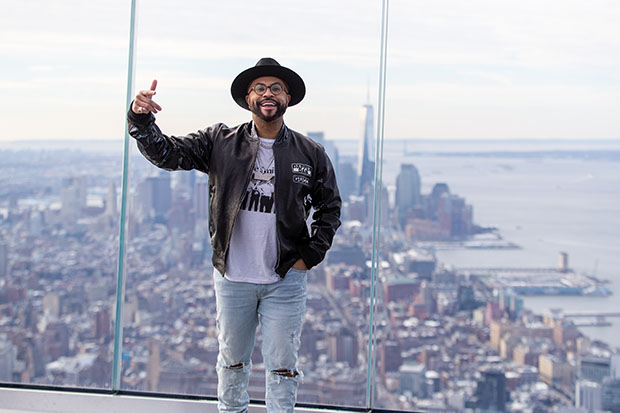 ▲ Evansville native Philip Lawrence is using his success as a singer, songwriter, and producer to launch a new business venture promoting equity in the entertainment industry.

Now that Lawrence has established a foothold in the entertainment industry, he’s paving the way for the next generation of artists and shining some of his light on social justice measures. With respected business manager Thomas St. John, Lawrence founded CMNTY Culture Group (pronounced “community”) in 2020. The company’s creative portfolio includes film and recording divisions as well as its own record label, CMNTY Records. Two recording artists, country trap singer/rapper RMR and “Black-ish” actress and singer Katlyn Nichol, have been signed, debut film project “The Last Plantation” was announced in June, and an all-encompassing company campus in southern California is in the works.

Through CMNTY Culture, Lawrence is forming a supportive community for minority and underrepresented artists and activists to act as a launch pad for them, the way Orlando was for him.

“There are so many things that you’re faced with as an artist and so many people around you who are required to help make you successful. It’s a lot to navigate, and if you don’t really know how, it’s hard to understand how to move left or right,” Lawrence says. “If you’ve got a team that has experience in that space, that gives you a head start into making that happen.”

“The team we started has these collective experiencial years in so many different arenas that we want to be able to be that kind of support system for artists that’s less about, ‘You’re signed to our label now, and we tell you what to do,’” Lawrence says. “It’s more about a partnership and saying, ‘These are the things that we know, that we’ve learned that we can help foster, hopefully, a successful career for you. But let’s talk about what you want to do. Let’s talk about where you see yourself. Let’s talk about how we can help you diversify in areas that maybe you thought were out of reach for you.’”

CMNTY Culture is particularly aligning itself with artists from underrepresented communities, offering them the resources and opportunities they often lack.

“It’s really about accessibility and black and brown kids seeing proof that certain things are possible. It’s part of the reason why I was so excited about ‘Jingle Jangle’ — this movie was predominantly all black and brown people in a space that no one’s ever seen us in before,” Lawrence says. 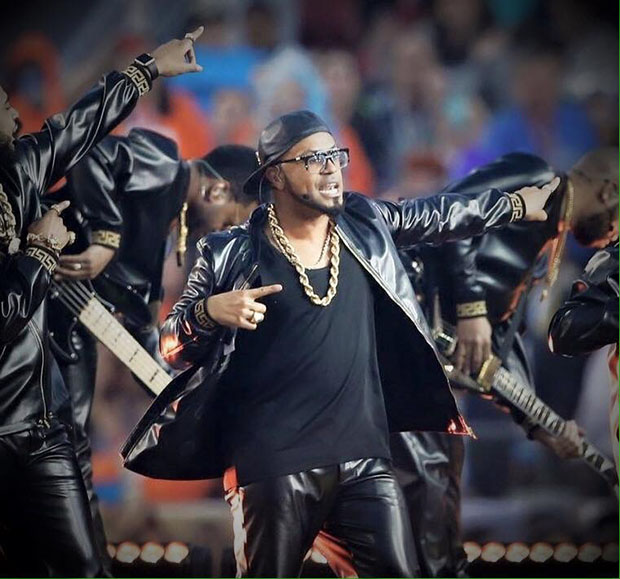 Lawrence’s own struggles as a burgeoning musician — and a creator of color — lend credibility and relatability to the creative venture he’s building. His wealth of experience led RMR to choose CMNTY Culture Records despite being pursued by labels across the world.

“He signed with us because I could relate to him from an artist standpoint,” Lawrence says. “I could speak to him from experience of what it’s like to be on the road 365 days out of the year. I could speak to him from the experience of when Bruno and I got signed to Atlantic — we got a very small deal that we turned into a very record-breaking large deal — and the steps along the way that we took to make that happen. It just lends a level of authenticity to the conversation. I’m not telling you something that I haven’t experienced already.”

“He’s paid his dues. (His success) didn’t happen overnight,” Cheryl says. “(For) the foundation he is setting for CMNTY Culture, he has a visceral connection to up-and-coming artists namely because it’s been his own experience.”

Part of Lawrence’s company goals is to also provide artists with ample room to create. From his runaway success with Mars, Lawrence knows firsthand the effect creative liberation can have.

“(Creating music is) an emotional roller coaster, in terms of joy and people having fun,” Lawrence says. “When Bruno and I met, that was our intention. That was the energy around our meeting. We were the one thing for both of us individually that we were missing, because our journey to that point was everybody being so serious, saying, ‘You’ve got to write a hit record.’ There was a lot of pressure, and from what I’ve learned, that isn’t the environment in which to be creative. So when we got together, it was like, oh my God, this can be fun.”

“Rest is the farthest thing from his mind,” Cheryl says. “There’s no time to rest on your laurels; there’s always something you’re needed for out in the world.”

Giving Credit to His “Village”

As he carves out his own space in entertainment — as well as in life: Lawrence has four children named Zaima, Zahlia, Zadeh, and Zeppelin with wife Urbana, as well as an older daughter, Raven — Lawrence’s source of inspiration remains the confidence instilled in him at a young age and the endless support he he’s received from his Evansville family and friends.

“When Sounds of Grace was touring, we had a saying — ‘I don’t know where I’m going, but I’ll find out when I get there’ — that later became a family motto,” Cheryl says. “That’s what drove Philip — the belief in himself, and his friends, and the village of Evansville, propelled him forward. There was something more that was driving him and something more to come.”

“Philip in the fifth grade got an All-Star Student award. It was rare that you got it in the fifth grade,” Phil Sr. says. “Every time he would call and be down — whether it was Disney or California or wherever — I’d say, ‘Just remember, you are an all-star person.’”

“It really was a village supporting him,” Piper says. “Cheryl and Phil recognized that their children were talented, but they gave them a childhood. They gave them a wonderful foundation of community and love so that Philip could become the man he is today.”

Although he’s based in Los Angeles and traveling globally building his company, “the man he is today” was grown from the seeds of positivity planted for Lawrence in the River City.

“(CMNTY Culture) is everything that I learned from growing up in Evansville,” Lawrence says. “My parents taught me very early to never sacrifice your dreams and to always believe in yourself and to go for your dreams at all costs.”

▲ A tight-knit family, Phip Lawrence recruited his mother Cheryl and father Phil Sr. to appear in the music video for "Uptown Funk" alongside co-writers Bruno Mars and Mark Ronson.