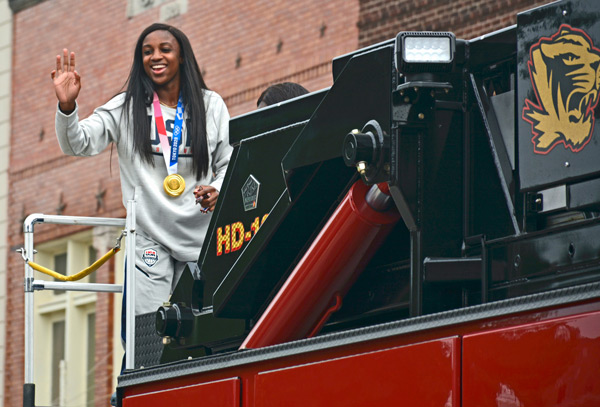 In the September/October issue of Evansville Living, we caught up with Olympians Lilly King and Jackie Young. Both Tri-State natives medaled at the delayed 2020 Summer Games in Tokyo, and both had unique journeys in getting there.

A WNBA point guard for the Las Vegas Aces, Princeton, Indiana, native Jackie Young had less than one week’s notice when she was called to replace Katie Lou Samuelson on the women’s basketball 3-on-3 team. Samuelson, a Seattle Storm player, had tested positive for COVID-19 and could no longer participate.

Young was on vacation when she got the call at 10:30 p.m. on July 17. She immediately began the COVID-19 testing process and left for Tokyo on July 20.

“Obviously I hated to go under the circumstances … because you never want somebody to get so close to their dream and then it just be taken away from them that fast,” she says. “So that part is what made it hard, but I knew that they needed me, so I just had to step up and fill that role.”

While she hadn’t played 3-on-3 in more than a year and only had time for two practices with the Olympic team before the event began, Young did have some comforts: 3-on-3 Teammate Kelsey Plum is a fellow Ace. The two Olympians have played together in Las Vegas for about three years. Young also had court experience with teammates Allisha Gray and Stefanie Dolson from WNBA training camps earlier this year.

“Once I got on the court and started playing with them, I was like okay, this is starting to come back,” says Young.

After overcoming France 18-16 in the semifinals on July 28, the U.S. faced the Russian Olympic Committee in the championship game that same day. It was a “dream come true” for Young when the team took home the gold with a score of 18-15.

“It was an honor and something that I’ve dreamt of since I was a little girl, so to be able to actually go to the Olympics and win gold was like a dream come true,” she says. “To actually be an Olympian, be able to medal, that is just something you can’t really describe — it’s hard to put into words. But I’m super thankful that I had the opportunity to play on a 3-on-3 women’s basketball team.”

Fans from Princeton who have followed Young’s career from Princeton Community High School to Notre Dame University were with her all the way. She was met by fans and family at the airport when she returned from Tokyo and enjoyed a welcome home parade in Princeton.

“It was a really great feeling to know that my hometown really supports me the way that they do,” says Young. 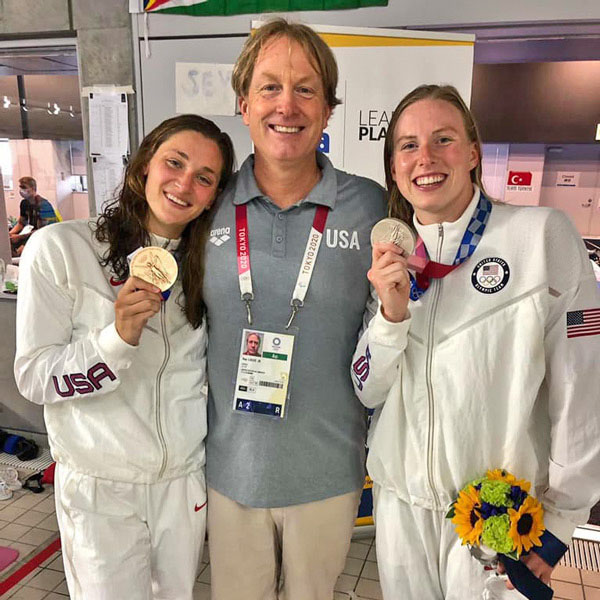 Fellow Olympian Lilly King is no stranger to hometown support — or the Olympics.

The Team USA swimmer and Evansville native made international waves when she won gold in both the 100-meter breaststroke and the 4×100-meter medley relay at the 2016 Rio De Janeiro Games. A Reitz High School alumna, King also holds NCAA titles in the 100- and 200-meter breaststroke.

As a seasoned Olympian and “veteran swimmer” compared to many new U.S. teammates, King’s Tokyo journey was a stark contrast to Young’s. She was able to settle in quicker and also take on a new leadership role.

“I just felt a lot more experienced and ready to go,” King says. “It was still just as exciting as the first one, I just kind of knew what to do better. I genuinely had so many good leaders and really good people looking out for me when I was in that first part of my career, so I definitely tried to kind of get on the ball and step into that leadership role, which is somewhere I’m very comfortable being.”

While navigating the Olympic Village was a breeze for King, she faced challenges in the pool, including the end of her five-year undefeated streak in the 100-meter breaststroke. Upset by fellow U.S. swimmer Lydia Jacoby, King took home the bronze medal in the race she calls her “bread and butter.”

“The 100-meter breast for me was a bit of a shock,” she says. “I didn’t quite know what to think of third place. We kind of touched the wall and I looked over and realized that Lydia, my teammate, had won and I genuinely in that moment was really excited for her. Obviously, I was disappointed for myself, but if I’m going to be in third place, I’d much rather be beat by an American than by somebody else.”

But King didn’t let the event hinder the rest of her Olympic performances. She went on to take the silver medal in the 200-meter breaststroke and the 4×100-meter medley relay.

“It was for sure a rollercoaster of emotions … but it was overall a really good experience for me,” says King.

With Paris chosen for the 2024 Games and Los Angeles for the 2028 Games, King has her sights set on training for the next trials. Meanwhile, Young has returned to Las Vegas for the Aces’ 2021 season. The team beat the Phoenix Mercury 96-90 on Sept. 28 and currently have a 24-8 overall record with a four-game winning streak.

For more coverage of the 2020 Olympics check out the September/October issue or online exclusives.