A Century of Service

Of Evansville’s long history in Southwestern Indiana, one annual tradition has stood the test of time and become the River City’s largest and most notable attraction, reliably drawing more than 100,000 attendees each year.

Celebrating its 96th year, the West Side Nut Club’s Fall Festival began in October 1921 when a group of West Side businessmen formed an organization that would handle the duties of putting together a festival to promote and support the West Side and Evansville as a whole.

The first Fall Festival was a Halloween Carnival on West Franklin Street, a one-night event that consisted of a parade of costumed people followed by a masked ball. An estimated 25,000 people attended.

The Nut Club continued with one- or two-night festivals until World War II, when festivities were halted from 1943 to 1945. None of those early festivals generated any profits for the Nut Club.

When it returned in 1946, the Fall Festival extended its activities through the end of the week, and in 1947, the Nut Club made its first profit on the festival. 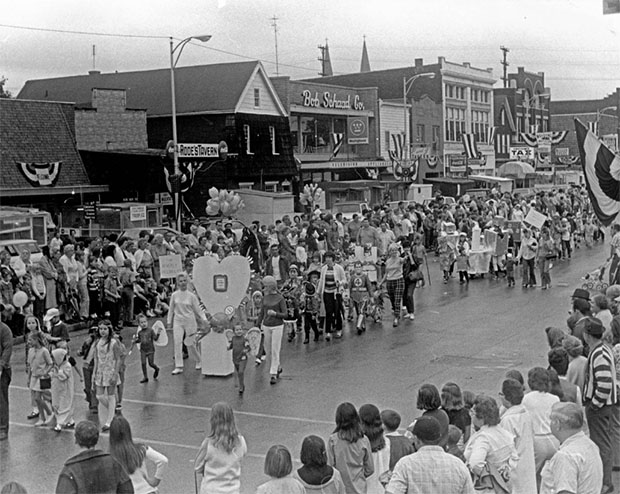 Fall Fest has since grown into a yearly spectacle, with people from all over the country visiting Evansville the first full week of October to indulge in the many unusual foods offered at the festival. A tug of war competition was added in 1970, and in 1985, the first Lighthouse Parade marched through Franklin Street.

With carnival rides, more than 100 food booths, and live entertainment, the Fall Festival has garnered national attention and become a massive fundraiser for many local non-profits. The week’s events have expanded from small carnival rides and exhibits to talent shows, a special kids’ day for Evansville Vanderburgh School Corporation students, a queen and king contest, karaoke, a pet parade, and the main parade.

In 2019, the Nut Club added its inaugural half pot fundraiser, in which ticket proceeds are split between the Nut Club and one ticket winner. The 2019 half pot was a booming success, raising more than $1.2 million by the end of the festival. While the Nut Club does not track how much money non-profit booths bring in, the organization generates about $800,000 outside of the half pot for rides and games.

This year, the West Side Nut Club is celebrating the group’s 100th anniversary, as well as the Fall Festival’s return after being canceled in 2020 because of COVID-19.