“A devilishly handsome raconteur who enjoys telling tales about food and its preparation,” Alton Brown quickly spouts when asked if he can describe himself in one sentence.

The fact is, the guy is modest. In direct opposition to kitchen “unitaskers” he so loathes, Brown does it all. He’s known as a culinary authority, an award-winning author, a TV host, a musician, a cinematographer, and a proud science nerd. “AB” is an omnipresent Renaissance man — or rather a man for all seasonings.

Brown and his crew last visited Evansville in 2006 while filming the series “Feasting on Asphalt,” riding motorcycles to the then-neglected historic Greyhound station, the YWCA Tea Room, and the Hilltop Inn for brain sandwiches. Taking on yet another project, the showman returns to the River City on May 4 for “Alton Brown Live: Eat Your Science” at the Old National Events Plaza, the follow-up to his “Edible Inevitable” tour.

Moderately obsessed with Brown since the early days of his show “Good Eats,” I hushed my inner “fangirl” (well, a little) to chat with him about our city, the show, and the South.

Do you recall any specific memories of Evansville or have an impression of our area that you’d like to share?

Alton Brown: Two things I remembered the most strongly — one, the bus station. I don’t know why that place struck me the way that it did. I was looking for a place to really talk about vending machines as part of the American road experience, and I remember leaving going “somebody needs to get hold of this and do this place justice.” So I am so happy to see that is happening, and I can’t wait to see it. The other thing, of course, is that I was looking for brains.

What inspired the idea for your variety shows, and what are you hoping to accomplish with them?

AB: I’ll tell you the flat out truth about this. What made me come up with the idea for a culinary variety show was Sonny and Cher. I was a child of the ‘70s and adored variety shows. You had musical numbers, you had comedy routines, you had bizarre circus acts, and it was like vaudeville on television. And I miss it. So I decided that I was going to design the culinary version of that very thing, and did with “Edible Inevitable.” Played it, toured it for two years, and adored every moment of it. When it was over, I was like, “You know what, I want to go again, I want to ride again.” So I came up with a new show.

On the last tour you built a huge version of the Easy-Bake Oven called the “Mega Bake.” Please tell us there is another mega appliance in the new show?

AB: Ohhh, baby. Oh, baby, is there a new appliance.

Can you, without giving away too much, tell me a little bit about it?

Is there a particular food or drink that you seek out when you travel from city to city on the tour?

AB: We’ve been doing this hashtag program on social media called #ABRoadEats. We have a different one for every city. About a week before we come there, we’ll post the hashtag for Evansville, and people will put in their votes and their suggestions for where I should eat. The cool thing about that is by show time, I’ve already got a relationship going with my audience, because I’ve eaten the food they told me to eat.

You’re from the South. Evansville is technically a Southern city, also. What do you believe distinguishes the culinary identity of the South?

AB: The absolute desire and need to consume animals that anyone else would throw away. This is why we have things like burgoo. You’re more Kentucky than you are Indiana, in a way. The food identity I got when I was there was most definitely Southern, which is delightful. 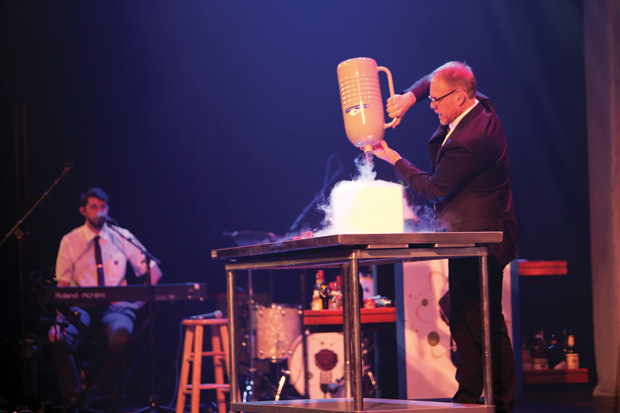