As the sharing of cat videos and memes sweep social media, the face of one special feline is Indiana’s own. Known for her large eyes, small body size, and lazy, drooping tongue, Lil BUB and her “Dude” call Bloomington, Indiana, home. Cleveland native Mike Bridavsky, 35, who attended Indiana University, received a text from a friend in the summer of 2011 of a bottle-fed feral runt kitten living in another friend’s toolshed. Later that fall, Bridavsky created a Tumblr, a blogging tool, to document Lil BUB and her popularity caught on quickly.

Lil BUB, now 4 years old with more than 2 million Facebook likes, was born with several deformities. She has one extra toe on all four of her paws, her lower jaw is distinctly smaller than her upper jaw, she has no teeth which allows her tongue to hang, and her legs are disproportionate to the rest of her body. She is considered a “perma-kitten” or a permanent kitten, meaning she will always stay around four pounds.

Bridavsky says before she became the Internet sensation she is today, it was a joke between him and his friends that she would be famous. T-shirts were made long before Lil BUB had her own merchandise line. Today, the cat’s store and website are designed and maintained by Evansville resident Aaron Tanner of Melodic Virtue. Evansville Living recently caught up with Lil BUB and Bridavsky during a break from her many engagements.

What is it about Lil BUB that makes fans flock to her?

What do you enjoy about living in Bloomington?
Indiana is beautiful. Bloomington has a lot of creativity, a lot of artistic people, and that climate is nice for someone who wants to play and make music. (Bridavsky opened a recording studio, Russian Recording, in 2008 in Bloomington. He is now married and has a son, who is a few months old.)

Proceeds generated through Lil BUB’s web store, appearances, and events help other animals with special needs. Why was that a priority for you?
We started a national fund for special needs pets as a way to do it fairly, because I can’t just give all of her proceeds to my local shelter and be done. I want to be able to say with confidence exactly where the money is going. This has given us a reason to do all of this with BUB, otherwise, what is the goal? I always donated here and there, but I never had the money to do more.

What’s Lil BUB’s schedule currently like? How do you feel when fans flock to her?
We travel out of town twice a month (Chicago, Cincinnati, and Denver this summer) and probably traveled 100,000 miles in three years. At all of our appearances, we offer meet and greets, which raise the most money for charity. I try to be humble and take it very seriously and respect people who believe in her magic. It is very flattering. I just go with the flow and separate myself, and remember my job is to make sure she is safe. I make sure things are BUB-approved. That requires a high level of intuition,
because she doesn’t talk.

For more information about Lil BUB and her Dude, visit lilbub.com. 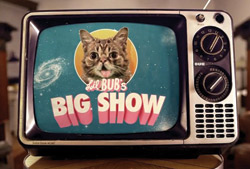