Imagine walking into an upscale hotel and asking for a knee replacement.

By fall 2018, that picture will not be far from reality, with the completion of the orthopedic and neuroscience specialty tower at Deaconess Gateway Hospital.

“This will be a state-of-the-art facility,” says Shawn McCoy, Deaconess Executive Vice President and Chief Operating Officer. “All the newest technology will be deployed, and all the concierge sort of services will go along with the processes for the patients. It’s going to be a totally different feel for patients who walk into this facility. It’s not going to feel like a hospital.”

With 223,000 square feet spread over six floors, it will occupy the northern end of the campus, near the Lloyd Expressway.

“We get asked, ‘why do you need a third tower?’” says Lynn Lingafelter, Deaconess Vice President of Operations. “And the main reason is we’re over capacity almost on a daily basis at the Gateway campus.”

When Gateway’s initial facilities were finished in 2006, the campus wasn’t busy, but the region and the world have changed, demanding much more of the hospital.
“Our regional referrals over the last five years have grown two fold,” says Lingafelter. “It’s not only surgical patients coming through the doors; it’s any type of patient that’s out in the region.”

Deaconess serves 26 counties radiating from Evansville, performing about 1,500 joint replacements — from shoulders to toes — and a similar number of neurosurgeries — from the top of the head to the lowest foot nerves — in one year, but the demand keeps growing.

McCoy estimates a 10 percent yearly increase in patients seeking the elective surgeries that the new unit will facilitate.

“People are living longer, so they want to live well later in their life,” says Ashley Sides Johnson, Deaconess Corporate Communication Specialist. “You didn’t really have a lot of 65- and 70-year-olds before who were still doing their SilverSneakers exercise every day.”

“I always take the example of my mom,” he says. “She’s in a generation where she just lives with pain in her knee and would rather not get it replaced and just have the pain. But newer generations don’t want the pain. They want to be active, so they have it replaced.”

The demographic for the type of elective surgeries to be offered in the new unit, says Lingafelter, is not just the older generations. Younger and younger people are coming in for those procedures.

“People have time, typically, when they’re having a joint replacement to make their election of where they want to go,” says Lingafelter. “They typically go through a process to get there. They talk to their neighbors and friends, etc. We know that happens. It’s shoppable, as they say, and we want to make sure Deaconess is top in line for those patients.”

In order to stand out among the competition, the team of Lingafelter, McCoy, and Orthopedic Service Line Manager Sara Holman ventured out for a long list of site visits and has since compiled the best pieces into a plan.

Among the sites were other specialty hospitals, a facility that performs outpatient joint replacements by sending recipients to a hotel for recovery, and a luxury hotel.
“The hotel opened up their system,” says McCoy, “and showed us exactly how it works.”

Holman says the other sites were similarly generous with information.

However, Deaconess’s own The Women’s Hospital and The Heart Hospital, along with the existing orthopedics and neuro care centers, provided some of the greatest lessons.

“We kind of rock,” says Holman. “I mean, honestly, we have a really good facility, so we haven’t been anywhere that we’re like, we’ve got to have this, and that will just put us up to that next notch. So really, we’re in competition with ourselves to be better.”

“As implant technology changes,” says McCoy, “we think that the patient will stay a shorter amount of time in the hospital, so these rooms are designed for being able to quickly turn that around.”

In addition to implant technology, Holman says, better pain control measures and a gym in the middle of the unit will aid patients in attaining speedy recovery.
For those who accompany patients, the new Gateway unit will afford a café, upscale shopping, and comfortable spaces to rest.

Surgery recipients, families, and hospital staff will be better equipped to keep up with patient status, resultant of handheld technologies like iPads, which will run Epic Systems electronic health records.

“They can look at their plan for the day,” says Holman. “They can see if they have any tests going on, who their nurse is, any results they have from x-rays, and that kind of thing.”

To fund the project, which involves the additions of a clinic and a parking garage and the expansion of the energy center, Deaconess will follow industry standard. About 90 percent of the capital will come from a combination of taxable and tax-exempt bonds, and the rest will be cash.

The new unit also will serve the area as an economic benefit by creating jobs for about 200 new hospital employees and providing work for local contractors, builders, and the like.

Though relatively early in the project timeline, the team says things are going well.

“It’s been pretty smooth,” says Holman, as her colleagues knock on a wooden conference table. 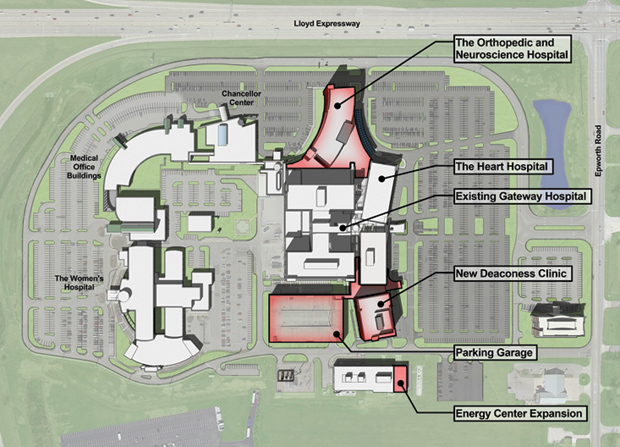