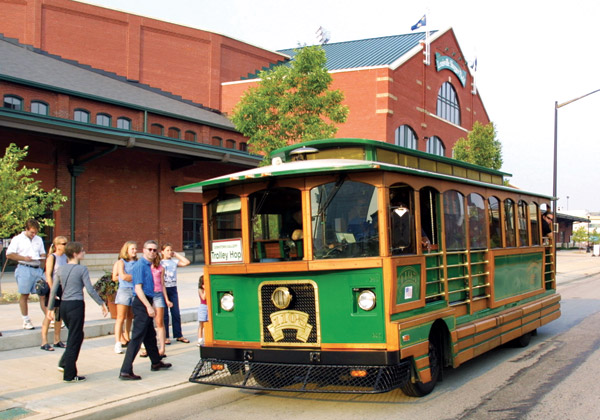 Evansville Living was founded on a question: Why not Evansville? We think it’s a question that can be asked of many ideas we collect from experiences and observations. These proposals, like our first topic – a trolley hop – might be inspired by other cities, or, perhaps an idea is the result of a brainstorm.

The Background:
Louisville’s transit authority began offering trolley service to downtown Louisville in 1987 after a nearly 40-year hiatus. In 1996, trolley service was introduced on Main and Market streets in Louisville, and today three trolleys serve downtown Louisville’s business district. On the first Friday of every month, the First Friday Trolley Hop carries passengers to visit galleries and shops along Main and Market streets to shop, visit galleries, and enjoy music, food, and libations.

“I’ve been doing the First Friday Trolley Hop on Main Street in Louisville since it began in 2001,” says Carla Carlton, a Louisville resident and Evansville Living freelance writer. “Back then, just a handful of art galleries participated; the Hop was an attempt to lure people downtown at night by offering wine and snacks. It worked. Now it’s a huge street party — places stay open late and many offer live music or other entertainment. You can park in designated lots, hop on a trolley, and get off anywhere along the route. And it’s all free.”

Why Not Evansville?
The Metropolitan Evansville Transit System introduced downtown trolley service around 1974. Today the city has one trolley operating Monday through Saturday, 6:15 a.m. to 6:15 p.m., carrying passengers on an hour loop of Main Street and North Main Street, departing from the downtown terminal. (Newburgh, Ind., too, has a trolley.)

We asked Philip Hooper, executive director of the Department of Metropolitan Development, “Why not Evansville?” He says it’s possible here. It would require city coordination, financial backing, and the support of a reinvigorated Downtown advocacy group that would promote multiple areas of the city. That’s what’s worked for Louisville’s Trolley Hop, which has the financial support of Republic Bank and the backing of an entire community, Hooper says.

Our Verdict:
Evansville could have a trolley hop, especially considering the success Louisville has seen with its event. In fact, the First Friday Trolley Hop in Louisville inspired a second event, the Frankfort Avenue Trolley Hop.

“F.A.T. Friday is held the last Friday of the month in several adjacent neighborhoods east of downtown,” Carlton says. “Like its predecessor, it has expanded to take in additional streets since it started in 2004. Who knows? Maybe one day soon the entire city will be hopping.”

If you have a Why Not Evansville topic to propose, please contact the editors at letters@evansvilleliving.com.