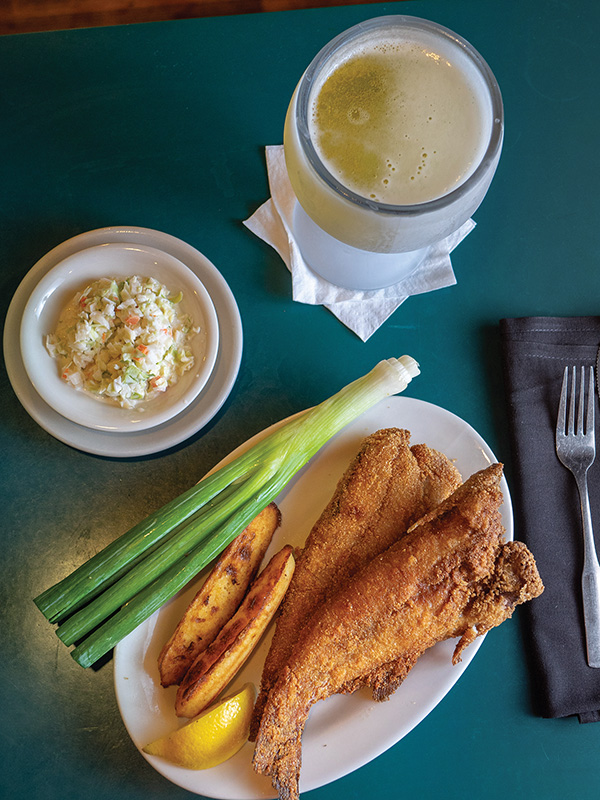 In Newburgh, Indiana, the “Hot Fiddlers!” neon sign along Indiana 662 is a beacon, drawing in diners into the establishment tucked into the hillside. After all, it is well known throughout the town and Evansville that if you want hot catfish fiddlers, the place to get them is Knob Hill Tavern.

“I think that’s always been the hook for this place,” says co-owner Dan Kollker.

The Kollkers are the third owners to run the 75-year-old restaurant on the hill. Since 1943, Knob Hill has served up some of the area’s favorite dishes — from the fiddlers to thin-crust pizza and the giant tenderloins. The establishment was run by Richard Gerard up until 1991, when Dan purchased the tavern on the hill.

But Knob Hill is not the first establishment for the family; running restaurants and cooking up customer favorites runs in the Kollker family.

Dan’s father, Robert Kollker, was one of the original owners of Roca Bar and also spent a career in Evansville’s restaurant scene.

“My dad was in it — he owned a number of places in Evansville — so I was raised in this business,” says Dan.

With his son Karson as co-owner of Knob Hill, the Kollkers now are in their third generation of restaurateurs. It’s a tradition Dan hopes to see continue.

In the last 75 years since the doors of Knob Hill first opened, little has changed outside of ownership. The bar and dining areas are still cozy enough to reminisce with neighbors and catch up with old friends. It even played backdrop in a few scenes of the movie “Back in the Day” directed by and starring Newburgh native Michael Rosenbaum.

“This place is small enough where it is easy to get to know everyone on a regular basis or by name. I think that makes it kind of fun, too. You get to where you know a lot of people,” says Karson. 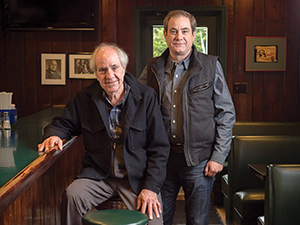 The back patio terrace dining area offers a popular, shaded space and provides the perfect spot for sipping on an ice cold fish bowl of one of The Knob’s 10 beers on tap during the summer and fall nights. The beer selection rotates often and features craft beers from around the country, with updates always posted to the restaurant’s website and Facebook pages.

The menu continues to offer plates customers old and new have loved during their visits. Alongside those classic hot fiddlers (traditionally served with corn bread and coleslaw), diners have a multitude of choices available. When it comes to other seafood options, The Knob dishes up fried shrimp and clams, and grilled salmon and Mahi Mahi.

The restaurant is a great spot for a ribeye steak as well or a batch of crispy fried chicken livers served up with a mushroom wine sauce.

When it comes to lunchtime, sandwich options abound at The Knob. Dan’s favorite (and a customer favorite, too, according to those at the bar during an afternoon in August) is the corned beef Reuben. Stacked with baked corned beef, Swiss cheese, Thousand Island dressing, and sauerkraut on rye bread, this sandwich is paired with chips, pepperoncini peppers, and a dill pickle.

The selection rounds out with burgers, chicken, tenderloins, French dip, ham and cheese, and many more. The Kollkers even serve up regional favorites — strombolis and cracker crust pizzas — using recipes Dan brought from his former restaurant, Deerhead Tavern.

Over the years, the menu has had its changes — weekly specials have allowed the Kollkers and their staff to try new flavors and dishes, the popular selections sometimes finding permanent homes on the menu.

One of the newest additions to Knob Hill, however, hasn’t been to the menu. Rather, the opening of a private party venue, Knob House, situated behind the main restaurant.

The space used to be a house that always has been on the property, according to Dan and Karson. Over the years, it has seen many usages — from a storage area to a living space for family members and employees, and even an office space.

“We decided to put some money into it (and fix it up),” says Karson. “It took a little more than two years.”

Now the Knob House can host private parties with up to 45 guests inside its dining and bar area and up to 50 on the outside patio space. Knob Hill Tavern also can cater a select menu out to the Knob House for any party or occasion. The space also has a liquor license to allow for alcoholic drinks. 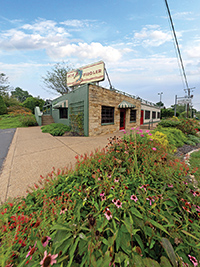 “Word is starting to get out about it. We’ve hosted birthdays, anniversaries, and baby showers. It’s picking up a lot,” says Karson.

The food has and continues to be a huge draw for the restaurant, but as the years have passed, the Kollkers say it’s more than their dishes that brings in the same faces and entices new visitors to The Knob and its neon “Hot Fiddlers” sign.

“To me — and probably I think to Karson as well — it’s just our customers being able to see friends, and they are friends of ours,” says Dan. “You get to see them on a daily basis. That’s a fun part of the job. Not many people can work and see their friends and talk to them.”

GET YOUR FILL ON THE HILL