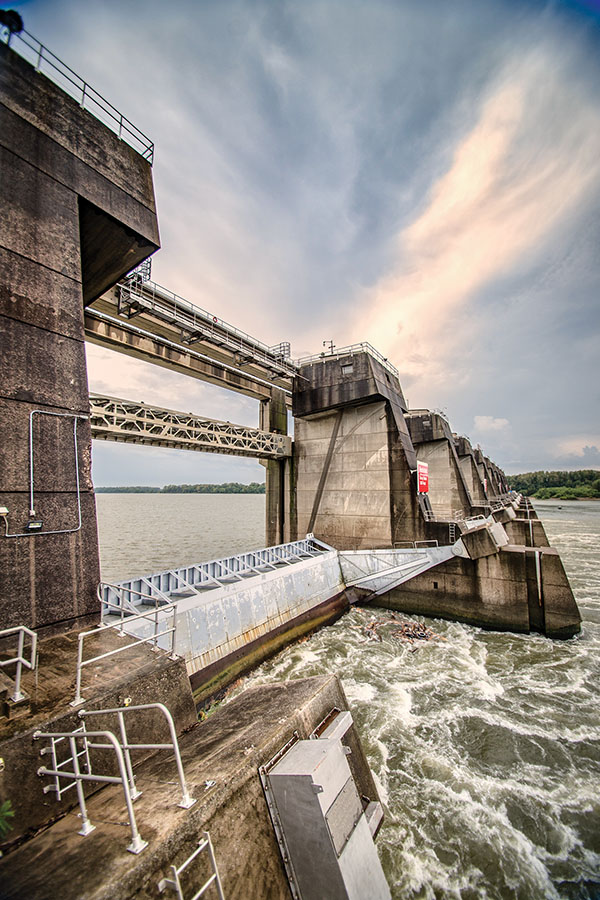 Lockmaster Tony Barron pages an Ingram barge preparing to go through the Newburgh Lock and Dam. He starts the process of closing the gates to the 1,200-foot chamber and lowering the water in the lock before allowing Crystal Taylor to continue its journey down the Ohio River.

Since 1974, the Newburgh Lock and Dam has assisted boats on journeys up and down the river. Operated by the Army Corps of Engineers, the lock and dam is maintained by a staff of 16 full-time employees who work all day, every day, year round.

“A lot of people walk by and see it,” says Barron. “It’s something cool to see but they don’t know the ins and outs of it.”

Aside from getting boats through the lock, the team also is responsible for maintenance of the lock and dam. At the Newburgh Lock and Dam, upkeep is essential with its location by the park in the public eye. It also is one of the top five locks and dams in the country for tonnage of product like steel, stone, grain, petroleum, and, of course, coal — not including the many recreational boats using the lock and dam.

“We are very vital to the economy in this area,” says Barron. “We average probably around 400 towboats per month, and we average more than 4 million tons of commodity per month.”

Eight minutes after closing the gates for Crystal Taylor, the chamber has been emptied to the proper water level. For boats going down the river, the water is lowered by two 16-foot emptying valves pumping water into the river. To go up, two 16-foot filling valves raise the water level. Barron sounds a whistle twice and Crystal Taylor departs to continue down the river. There already is another boat below waiting to go up.

“It’s a great place to work. It really is,” says Barron. “Every day is a challenge and an adventure because you never know what you’re going to run into from day to day.”

For more information about the Newburgh Lock and Dam, visit lrl.usace.army.mil.