Almost two years ago, Troy Wells and Bill Bell moved into the latest of a long line of houses together. The Rutledge/Gudgel House, located in downtown Newburgh, Indiana, would prove to be a challenge; but with their 25 years of experience building and renovating homes, it was nothing Wells and Bell hadn’t seen before.

The Rutledge/Gudgel House is the seventh home they have owned and renovated in Newburgh after moving to the small town in 2000 from Evansville.

“We’ve been here in the area for about 25 years, roughly,” says Wells. “We moved to Evansville and, after we lived in Evansville for a while, realized Newburgh was the area we wanted to live in.”

“We love the community,” adds Bell.

This is the second home Wells and Bell have renovated in downtown Newburgh, moving to the Rutledge/Gudgel House from a home on Main Street. They weren’t familiar with the house until a friend of a friend suggested they look into it. 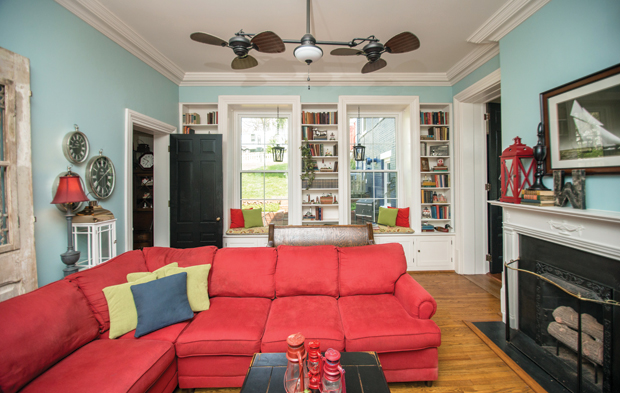 ▲ Two fireplaces set off the space harkening back to when it initially was two separate rooms — a men’s parlor and a women’s parlor.

“They researched us before they got back with us,” says Wells. “And after they saw some of the houses we had done, they were quick to respond.”

Wells and Bell eventually bought the Rutledge/Gudgel House from the Gudgel family, becoming the next owners in a long line of proprietors. The first section of the house, the east end, was built around 1840 by Abner Luce, the town postmaster. He sold the house about seven years later to a family who made the additions to the property. The family first added the main and largest section of the house and later constructed the back portion to the home, completing the additions in 1860.

With the Civil War right around the corner, the Rutledge/Gudgel House was about to experience even bigger changes than just structural additions. During the raid on Newburgh, around 17 houses were ransacked during the night.

“They knew which houses they were going to go to,” says Wells. “This was the first house the raiders took because it was known to have an arsenal in it.”

After the raid, it was used as a hospital for an overflow of patients from the town hospital. It is believed the soldiers at the Rutledge/Gudgel House were patients who weren’t going to live much longer.

Later, it also was used to hold church services for the first Methodist church in Newburgh while the church building was constructed. It then was purchased by Dr. Robert Slaughter for his daughter Lillie and her husband Andrew J. Rutledge, a prominent lawyer in the community.

No major renovations were done again until the 1930s when the front porch and widow’s walk were removed. The house is named after the Rutledge family, who owned the property for around 50 years.

After the Rutledge family, it changed hands a few more times until the 1960s when the Gudgel family purchased and held the property longer than any other owners. During their last 25 years in the house, it served as a weekend home for the Gudgels and their guests.

“The house pretty much went for 25 years without being lived in — only at random times,” says Wells. “They would let guests come and stay here; then they would sign a guest registry almost like you were staying at a bed and breakfast.”

In each of their home renovations, paying homage to the house’s history and families who came before always is a priority for Wells and Bell. Wells currently is making a motion to have the name of the home officially changed to the Rutledge/Gudgel House — from the Rutledge House — to acknowledge the Gudgel family’s role in shaping the home’s history. 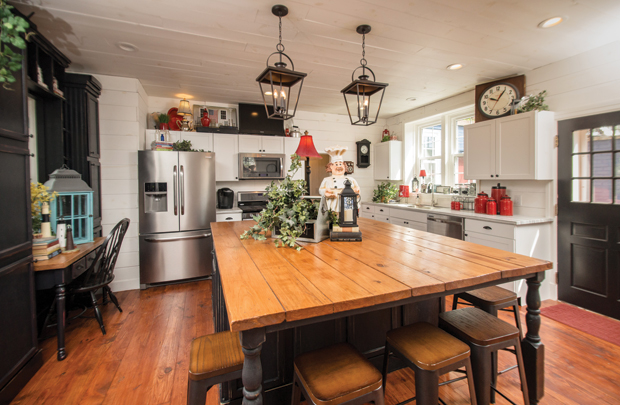 ▲ In their almost two years in the Rutledge/Gudgel House, Wells and Bell have made many changes to modernize the historic home like adding air conditioning, opening up the dining and kitchen areas, and upgrading appliances. The house originally had 10 fireplaces, some of which have been removed over time during different renovations.

“It’s a historic home that lives in the 21st century,” says Wells. “It’s a comfortable home. It’s an inviting home. We’ve done a good job keeping all the historic details of the house, yet bringing it to where it functions for a modern family.”

Some of those modern changes were opening up the kitchen and dining room spaces in the original portion of the house and taking down the doors separating the men’s parlor from the women’s parlor to make one open living space. They also added air conditioning to the big section of the house, which had never been done before Wells and Bell.

“It was miserable,” says Bell.

“You think, ‘How is that possible? How is it possible not to have air conditioning in the house,’” adds Wells.

Refurbishing items to use as décor is a strength of Wells’s and Bell’s. Wells used the doors separating the two parlors to build an entertainment center, building it in a way that didn’t damage the doors and will allow future owners to reassemble them if they want to restore the house to its original layout.

“I like anything old. I pretty much refurbished every piece of furniture we have here,” says Wells. “We usually don’t buy new furniture. It’s old or thrift shop. I have a great relationship with Feather Your Nest.”

“Too good of a relationship,” jokes Bell. 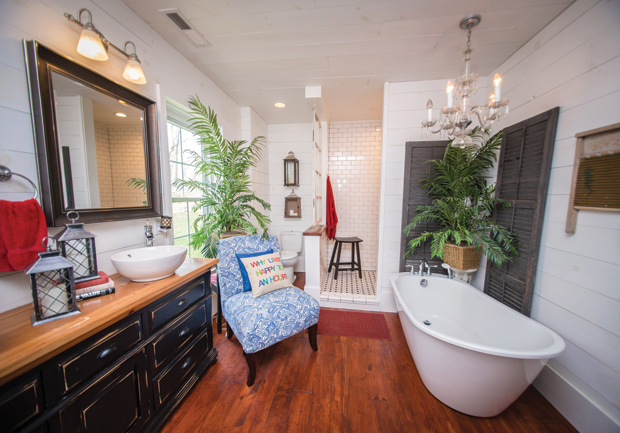 ▲ During their home renovations, Wells and Bell didn’t hire a designer for any part of the process. After renovating seven homes in Newburgh, they are experts at home design and remodeling. “We’ve never gone into a house and not turned it into ours,” says Bell.

While making these kinds of changes to a historic home might be intimidating to some, it is child’s play for a couple like Wells and Bell. Wells, who works with Old Navy, is on the Historic Preservation Commission and Bell, the general manager of Olive Garden in Owensboro, Kentucky, is on the Newburgh Plan Commission. They knew going in what the constraints would be on their federal-style home, a house usually built on a waterway with brick walls and without a foundation. Wells says there are no restrictions for the interior; the restrictions fall to the exterior of the home.

“You just have to have the guts to try it once,” says Bell. “Some things we’ve done once and said, ‘We’ll never do that again. We’ll hire somebody to do it, or pay somebody to do it.’ But it’s just a matter of having the guts to give it a shot and do it yourself. You learn.”

Those exterior limitations, however, did not stop them from putting their own stamp on the house. The previously gray house is now a vibrant blue — a federal blue to be exact — and a historic color to complement the federal-style house’s history. Wells says they always knew they wanted the house to be blue, but the key was finding the right shade.

“This blue right here is a very bold blue, but I think it’s very complimentary of the house,” says Wells. “As soon as we painted the house, it became alive again. People recognize the house now. People had never noticed the house before.”

With all of these modifications in a home that has been owned and loved by so many, Wells and Bell never want families to feel like they don’t respect the history and memories of the home. They always send pictures and updates of their renovations to the previous owners of the houses they have remodeled and try to keep a relationship with the families they purchase homes from.

Looking to the future from their home of the past, Wells, originally from Hopkinsville, Kentucky, and Bell, of Owensboro, Kentucky, both see themselves moving again not too far down the line. They like to stay busy and working on new adventures. When it comes to home projects, the pair is a perfect example of opposites attracting. Wells loves to renovate and modernize old homes while Bell prefers to build new homes to look old.

“Our skills complement each other, too,” says Wells. “I’m the visionary, and he puts it on paper and bases our budget on it. He’s the behind-the-scenes person with wanting all the electrical outlets certain places, keeping it all tech savvy with Wi-Fi. That’s his thing right there. It definitely is a partnership. It can’t be done with just one. We’ve got to have both.”

While leaving behind all of their hard work and time can be hard, for Wells and Bell it isn’t goodbye. It simply is passing down a piece of history from one family to the next.

“We just hope the next owners would take as much pride in maintaining it as we did remodeling it,” says Bell. 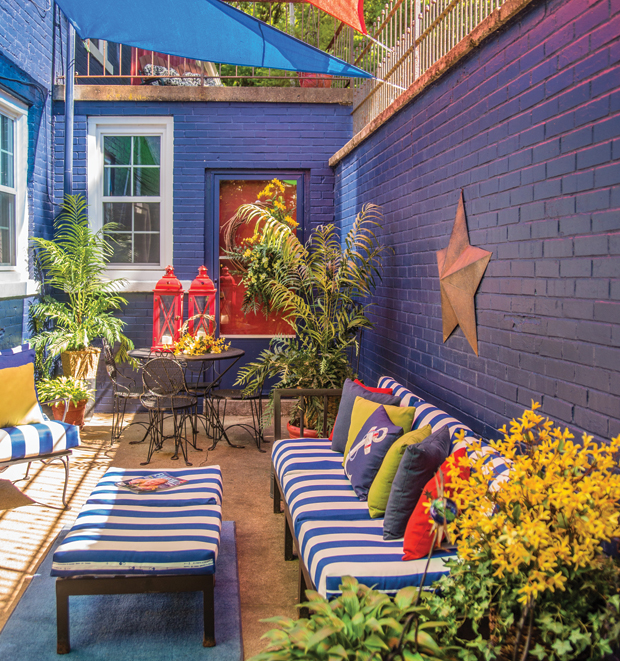 ▲ Wells and Bell describe the style of their home to be “coastal farmhouse,” weaving together historical elements with modern touches. The house was voted Home of the Year in 2016 by Historic Newburgh, Inc. The column in their foyer, pictured above, was original to the front porch and discovered in the garage.
1 of 7
Share
Facebook
Twitter
Previous article
Culture Walk
Next article
Our Favorite Small Town