Bluegrass music is not easy to define.

Bill Monroe, considered the father of the genre, said: “It’s Scotch bagpipes and old-time fiddling. It’s Methodist and holiness and Baptist. It’s blues and jazz, and it has a high, lonesome sound … It’s played from my heart to your heart, and it will touch you.”

“I think it’s such an individualized feeling of what it means to you,” adds Carly Smith, marketing director of the Bluegrass Music Hall of Fame and Museum. “It’s hard to put into words.”

The new museum along Owensboro, Kentucky’s riverfront (311 W. Second St.) doesn’t look to define bluegrass to its visitors. Its exhibit spaces, displays, and performance areas invite diehards and newcomers alike to not only delve into the past of the genre, but also experience it live as well.

“Our mission and vision is the preservation of the music, but we also want to grow it,” says Smith.

Part of the growth will happen through the many performance spaces located throughout the museum. Along with a 450-seat theater, several small stage areas are set up through the space. The museum also opens with a Picking Parlor — a display of instruments common in bluegrass from a Gibson guitar to a fiddle. The donated instruments hang on the wall, and guests are invited to pluck and play.

“Jamming is a big part of the culture of bluegrass,” says Smith. “Many people who visit, and you’ll find this a lot in the bluegrass genre, play instruments themselves.”

Opened in October 2018, the 46,000-square-foot museum, designed by Hafer Architects, features three floors with exhibits, the Bluegrass Hall of Fame room, and multiple event spaces. The new museum building came to fruition partly because of the success of the organization’s popular ROMP Festival, held every June at Yellow Creek Park.

“As we grew the festival, we saw there was something to it — people were interested in bluegrass,” says Smith.

The first floor of the museum chronicles the beginnings of bluegrass — where Bill Monroe pulled from influences of blues, jazz, country, gospel, and more — through its history to modern-day bands making their own mark on the genre. Artifacts in the museum are often donated or loaned to the organization, says Smith. The second floor showcases the International Bluegrass Music Association Hall of Fame inductee plaques. Visitors also can browse through oral history videos gathered as part of work the museum does with the Marilyn and William Young Charitable Foundation — the stories of more than 225 artists and musicians have been recorded.

“They are so important, and I’m so glad we’ve been a part of it,” says Smith. 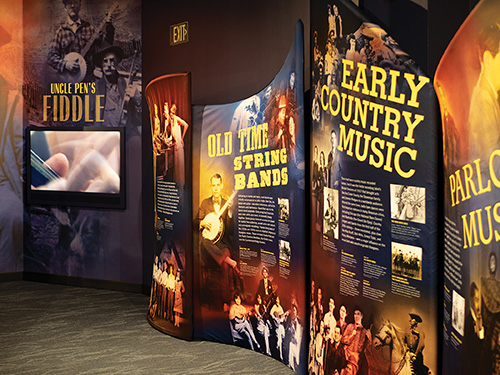 The hope is the museum helps the city become a cultural tourism destination, especially as Owensboro has embraced its bluegrass ties. Smith points out a majority of the museum’s visitors come from outside Kentucky.

“I think we’re just another cornerstone of what Owensboro has done for the downtown area,” says Smith. “There’s more going on here, and that’s great.”