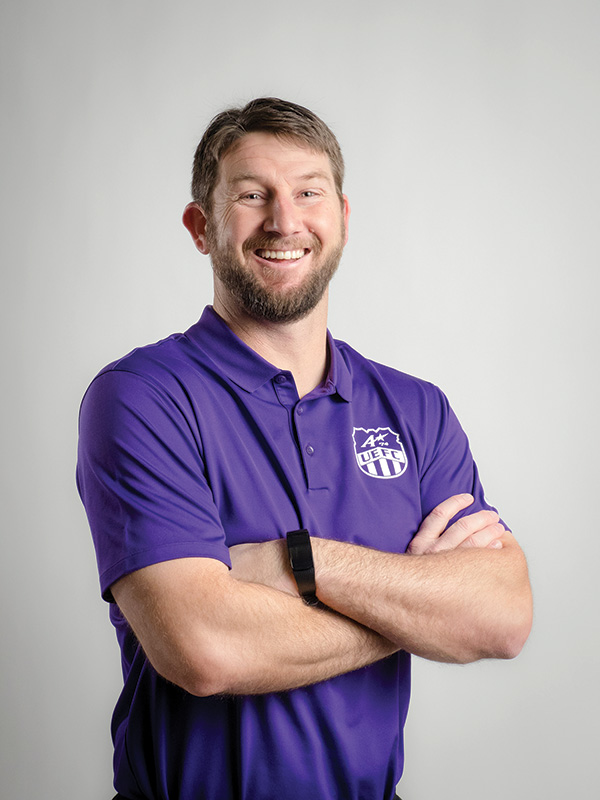 Evansville is far more unique and has far more character than many natives realize or admit to themselves,” says Claybourn.

One example is the EMERGING COFFEE CULTURE. At the start of the day, Claybourn says Penny Lane in Downtown Evansville remains a favorite spot for coffee. Claybourn also appreciates the space at Lucid (located in historic Newburgh, Indiana, in the former Old Country Store) and the thought that goes into every drink at Honey Moon (a cozy shop near the University of Evansville).

Claybourn has seen the classic West Franklin Street culture grow as well and Haynie’s Corner sprout new hangouts like WALTON’S, MO’S HOUSE, AND THE DAPPER PIG — all of which he shows off to newcomers.

According to Claybourn, there’s a level of opportunity and access in Evansville that is much more difficult to find in larger cities like Chicago. In Evansville, he says, you have the opportunity to excel.

And at the end of the day, Claybourn says he knows it’s a cliché, but “Evansville is a great place to raise a family.”

“Overlooking the water there, when the sun is shining, is one of the things I enjoy the most,” says the executive director of EVANSVILLE’S CHILDREN MUSEUM and Evansville native.

Terry, a graduate of Kentucky State University, Frankfort, Kentucky, and the University of Evansville, accepted her position at cMoe seven years ago and has worked with her staff to strengthen the museum, which was founded in 1990 and relocated to its Downtown location in 2006. She also has represented District 3 on the Vanderburgh County Council since 2010.

“I think Evansville is on the cusp of exploding in a good way, with the various developments and changing the city culture as a whole,” she says.

While it has been rewarding for Terry to see the museum grow — attendance for cMoe hit 71,812 in 2017 —  the interactions she has with families is one of her favorite aspects of the job.

“I get to see families create, explore, and discover through play. As a leader in informal learning, we provide a place where families from Evansville and beyond can come together,” she says.

As growth occurs around the museum, Terry and her staff plan to make sure cMoe isn’t left behind. After the addition of three exhibits — Kids World and ArtMaker in 2017 and Aluminate in 2016 — the museum now will refresh older exhibits such as The Work Smart gallery and Wet Deck.

“We’re constantly reimagining the museum to best fit the ever-changing needs of our community,” says Terry.

For Marshall Ray, Evansville always has been a soccer city. As head coach of the University of Evansville Men’s Soccer team and a former UE player, he has experienced first hand Evansville’s enthusiasm for the sport.

“You look back at photos of the Aces’ team in the late 1980s and early 1990s and there’s 3,000 people lining the field,” he says. “I think we pre-date the current soccer hysteria and craze.”

A native of Marshall County, Kentucky, Ray worked for the National Park Service after graduating, but missed soccer too much to stay away. After a stint with a team in Nashville, he dived into coaching at Drury University, Springfield, Missouri, and Duke University, Durham, North Carolina, before returning to UE in 2006 as an assistant coach.

“I tell everyone the real reason I came back to Evansville is because the two best pizza places I’ve ever been to, THE SLICE and TURONI’S, are within a block of each other, right by my office,” Ray jokes.

Love of pizza aside, Ray says it has been rewarding to return to Evansville with his wife and four children to re-establish the brand and identity of UE soccer. Coming back also has allowed Ray to see the development and growth over the last two decades.

“I feel a responsibility when new families come to campus to make them aware of how much progress I think our city has made,” he says. “To see that progress in front of my eyes has been wonderful.”

Four years after arriving in Evansville in 1998, Daniela Vidal had earned an M.B.A. from the University of Southern Indiana, worked as a researcher and engineer, and helped found HOLA, HOSPITALITY AND OUTREACH FOR LATIN AMERICANS.

The group works with city leaders to develop bilingual resources, facilitate listening sessions between parents and the EVSC, and connect with board of directors wanting outreach to the growing Latino community.

“Once you get that connection, you just don’t leave,” says Vidal. She and her husband had planned to return to jobs and family in Venezuela after a year and a half in Evansville, but they decided instead to start their family in the city.

Now the director of opportunity development and applied research at USI, Vidal is deeply rooted in many aspects of the community.

She works to help Catholics rekindle their faith in the Cursillo program, show youth the appeal of modern manufacturing, attract and retain talent in the area, and revive Evansville’s entrepreneurial spirit.

“There is a very strong entrepreneurial vein,” says Vidal. “It was forgotten for a while, but that’s what we’re really trying to tap into and get this next generation to bring back that spirit — and in that way bring a lot more vibrancy to the region.”

When Vidal isn’t working, she enjoys visiting the Evansville and Newburgh downtown areas, where that old spirit shines through in a combination of historic homes and new businesses.

As director of sales for the Evansville Convention and Visitors Bureau, it’s Ashley Vezzoso-Schaefer’s job to sell Evansville.

“No two days are the same, and that’s what I love about it,” she says. “The interest in Evansville has definitely picked up in regard to conventions, which is great. This is an exciting time to be a part of our community with a growing Downtown and vibrant culture districts. The changes are being noticed.”

Born and raised in Evansville, Vezzoso-Schaefer graduated from Memorial High School and went on to earn her bachelor’s degree in marketing and public relations from the University of Southern Indiana. She began her career with an internship at the CVB and over the last 15 years has moved up to director of sales.

One of her favorite places to promote? THE HAYNIE’S CORNER ARTS DISTRICT.

“I love it down there. I love the momentum that’s going on, and it has changed tremendously in the last 14 years,” says Vezzoso-Schaefer.

But she truly can’t pick a favorite spot, she says. From the East Side to West Franklin Street and Downtown Main Street, Vezzoso-Schaefer says the local variety Evansville offers visitors is something that is one of a kind.

“We really encourage people to come down and see what Evansville has to offer. We’re not a small town that doesn’t have an experience to be had,” she says. “And when they do come down here, they really enjoy it, bringing their conventions here. That’s what is really rewarding.”

A love of houses is what brought Scott Hyatt into the real estate business. Raised in Vincennes, Indiana, and a graduate of the University of Southern Indiana, Hyatt says taking care of his father’s rental properties helped build his passion for the industry.

“He owned some rental homes, which I took care of, managed, collected rent for,” he says. “In those days I did all the repairs as well.”

Hyatt obtained his real estate license when he was 18 years old and has worked in various companies from David Hocker and Associates in Owensboro, Kentucky, to Trammell Crow Company at the University of Pennsylvania in Philadelphia. He and his wife Susan moved to Evansville 19 years ago, and it was a decision Hyatt has not regretted.

“When we pulled out of the airport here in Evansville when we moved here, the lady at the parking lot booth actually talked to us. She said hi and was friendly. That was something that did not exist in Philadelphia,” he says. “People say the Midwest is friendly, and it’s honestly absolutely true.”

There are many spots in the city Hyatt loves — from the locally-owned restaurants in HAYNIE’S CORNER to THE VICTORY THEATRE in Downtown Evansville. And as a car lover, he definitely touts the DREAM CAR MUSEUM.

“When you can walk in and see a Lotus, Ferraris, Roll Royces, it’s unbelievable,” he says. “Larry Bennett has done amazing with that, I think it’s awesome.”