The plans for Nathan and Noelle Mominee’s dream home were not ones that were finished quickly. In fact, the couple took the better part of three years putting their ideal home down on paper before they even found a site to build.

“I tell people when designing homes, ‘Let’s not get ahead of ourselves and design something until you find your land.’ But I had the idea of the land I wanted, so I had the cart in front of the horse,” says Nathan. “The whole time our intention was to find something with some woods and trails.”

“We looked at about nine properties including this one,” adds Noelle.

Nathan and Noelle met at the University of Evansville where they both studied civil engineering. Nathan — a Boonville, Indiana, native — was a teacher’s aide in Dr. Mark Valenzuela’s engineering 101 course. Noelle, a graduate of Castle High School, was a student in the class.

“That’s where we first saw each other, and the rest is history,” says Nathan. 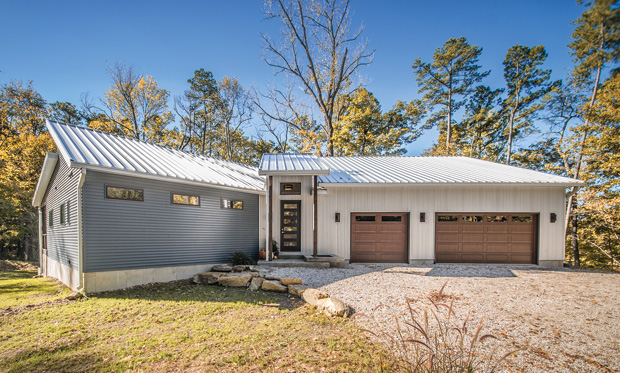 When they both graduated from UE, Nathan set out to build his first house, something he says he had wanted to do since he was young. He and Noelle worked together on the project, finishing the home before they were married in 2005.

“We were testing ourselves,” says Noelle with a smile.

“I think we did well with all the stress,” adds Nathan. “We definitely did things the hard way, but we’ve learned a lot since then.” 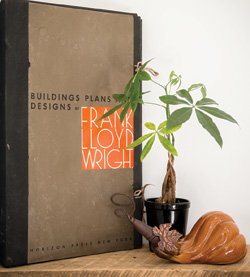 From that project, the Mominees grew more into their business — Mominee Homes and Roofing — and into their lives. It was during this time that the plans for their home continued to adjust. A large garage attached to the house was added to keep one main footprint for the home. Porches running the length of the house were designed for the first floor and the walk-out basement.

“The kitchen was one of the biggest areas that changed,” says Noelle. “And the master bedroom. Both went through a lot of iterations.”

“We stretched and tugged and tweaked on the plans,” adds Nathan. “But it was a good thing it took some time to finalize because we’ve grown as designers and as people. We understand more of what we enjoy and how we live. It’s nice to be able to have that kind of understanding when you make this kind of commitment.”

Then, by chance, they stumbled on a spot near Scales Lake in Boonville, Indiana. The land was a part of acreage owned by the Weyerbacher family, who has lived in the Boonville area since the mid 1800s, according to Nathan. Hoping to work out an agreement with the family, Nathan visited the Weyerbachers two years ago.

“John Weyerbacher answered the door, and we just kind of hit it off,” says Nathan. “I told him I grew up here and I wanted to come back home, be closer to my family, and be close to Scales Lake Park. I told him my story, and he said he would talk to his brothers and sisters about it.”

Two years later, the Mominees would see their plans finally come to life. 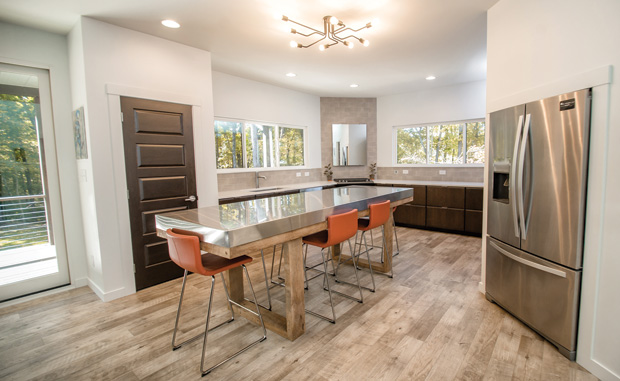 ▲ SPACE AND FUNCTION –  Nathan and Noelle Mominee, above right, have called their modern-inspired Boonville residence home for about a year. Their kitchen, above, features a mirror with a hood-fan behind it installed above the stove, which allows anyone cooking to keep an eye on whoever is behind them. Above left, a book of designs by Frank Lloyd Wright sits in the entryway of the home. Wright was known for designing structures in harmony with the environment, which is what the Mominees strive to do with their home.

“This spot — we couldn’t really have designed anything better than what we’ve found here,” says Nathan.

For Nathan and Noelle, their home is a mixture of functionality, modern design, and comfort. The Mominees knew for certain they wanted a home with a low impact on the environment around them, especially as the couple wanted to build in a wooded area. A southern facing spot also was a must to maximize the amount of winter sunlight coming into the home.

“One of the biggest things you see when you walk in or that you feel is the atrium,” says Nathan.

Traditionally, homes with large, open floor plans have interior rooms far from exterior walls, which prevents natural light from filtering in. Design elements such as skylights can help, but can become a maintenance concern, says Nathan.

To capitalize on the southern viewshed from the home and avoid elements such as skylights, the Mominees maximized the southern glazing with 16-foot glass sliding doors and an atrium that allows indirect sunlight to fill the space throughout the day. 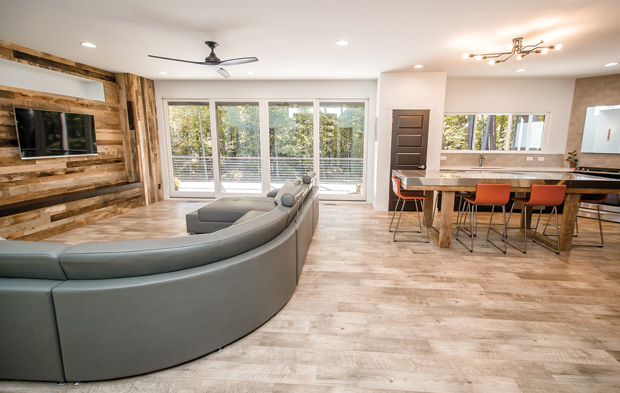 “It creates this three-dimensional dynamic in the big common room,” says Nathan. “We were able to carry it into the master suite, which really was cool. It also makes the roofline exciting.”

The first story of the home features a very open plan, with a kitchen and common room that flows into the master bedroom suite complete with a long, tiled shower and a large walk-in closet. In the basement, there are two galley-styled rooms for the Mominees’ two children, as well as an open play area. 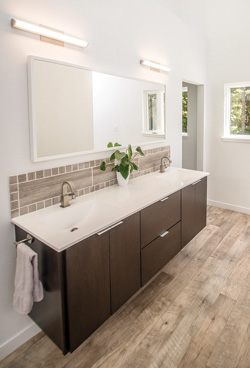 The bathroom for the children is split, with a shower and vanity in one room and another half bathroom next door, an idea from Noelle to avoid conflicts over the space in the morning.

The couple also mixed in “some old with new,” with repurposed barn wood used on several different walls throughout the home.

“We’re trying to mix it in with the modern,” says Noelle. “I call it warm modern.”

The home also features a beautiful stained glass window depicting a great blue heron above the entrance to the master suite. The piece was made by Nathan’s mom, and aunt and uncle (owners of Mominee Studios) and has had a place in each of Nathan’s and Noelle’s homes.

In all, the home has a total footprint of 3,200 square feet. It sits on nearly 16 acres of wooded land, which allows the Mominees to build mountain bike trails through the property. Nathan already has completed a one-mile loop, which the family enjoys frequently. 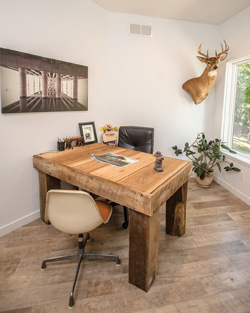 Though the home is not overwrought with extra space, there is enough for the family to eat, play, and live together, which is what the Mominees say is the point.

“We are trying to create space that has functionality. We didn’t leave much room for additional furniture or things,” says Noelle. “We wanted to create spacing where things have a purpose and place.”

While many may snub their noses at modern styles for being sterile and cold, the Mominees find the design invites the outdoors in and allows them to be creative as a family to make the space more their own.

“When it’s not all ready for a photo shoot, it’s got the color of life with homework spread out, toys all over the place,” says Nathan. “I think it’s just a good canvas to put the color of your life on.”

“We’re trying to set that example for our children, too,” adds Noelle. “They have toys, but we’re trying to keep it simple. Get them outside and explore.”

In the future, the couple plans an addition of a pool in the back yard along with a big tree house, all of which play into the family’s love of the nature around them. 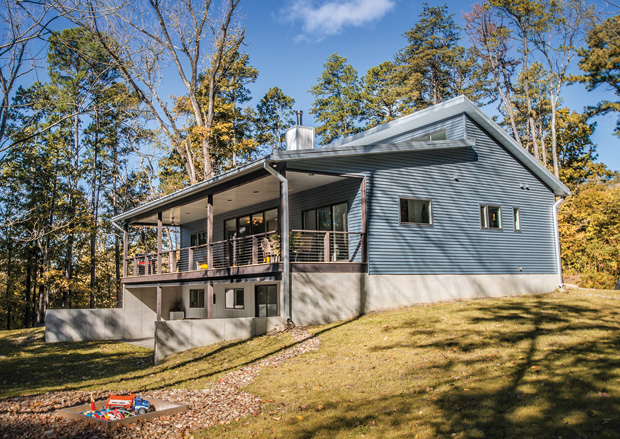 ▲ LIVE DELIBERATELY –  The Mominees’ home features minimum furniture and an open floor plan that flows easily throughout the house. The main living space, kitchen, and master bedroom face large windows looking out at the family’s wooded backyard. Both porches on the first level and basement walk-out span the length of the home and are 500 square feet each.

“It’s a whole different feeling here,” says Noelle. “Being able to see the woods, that feeling you get walking in — it’s one of my favorite things.” 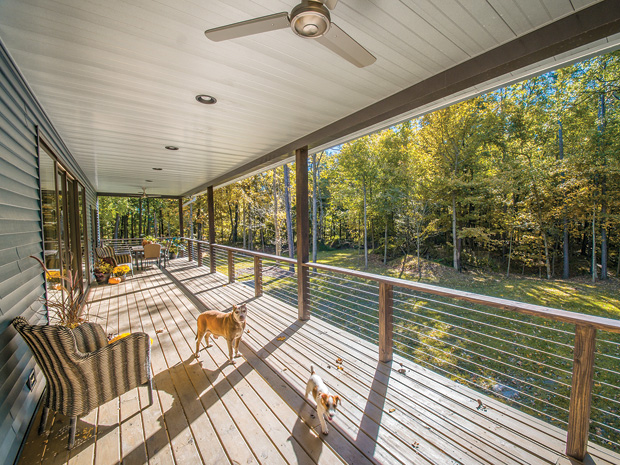 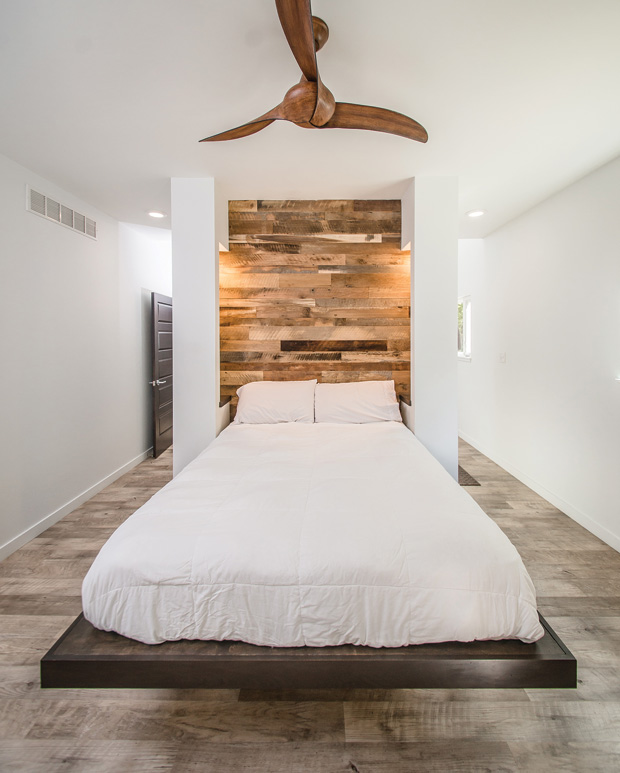 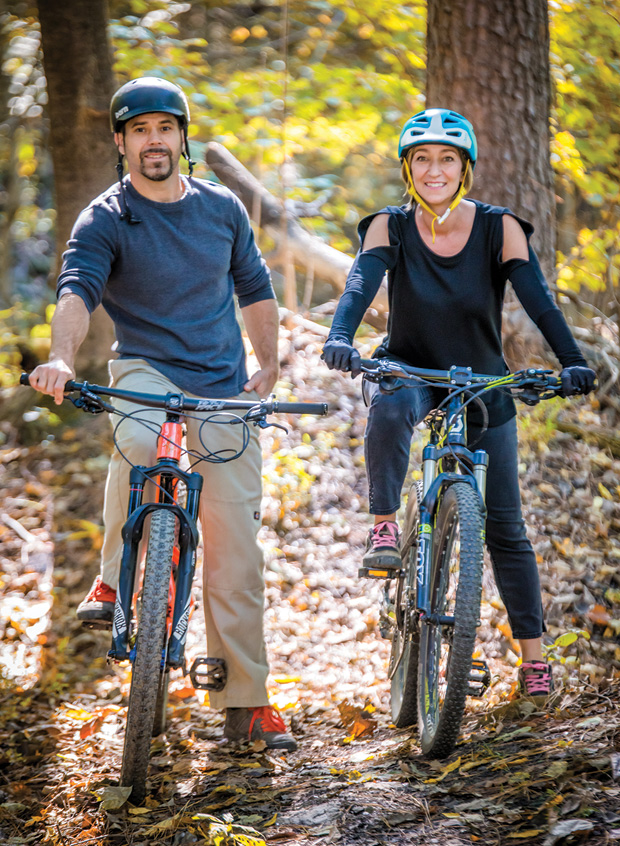 ▲ WILDERNESS AND NATURE –  Mountain biking is a favorite hobby of the Mominee family. Nathan and Noelle built a one-mile trail loop on their property, with twists, turns, and jumps included. The couple say they enjoy teaching their two young children the ropes of biking and being outside as a family.
Share
Facebook
Twitter
Previous article
Ring in the Season
Next article
Florida Pearl