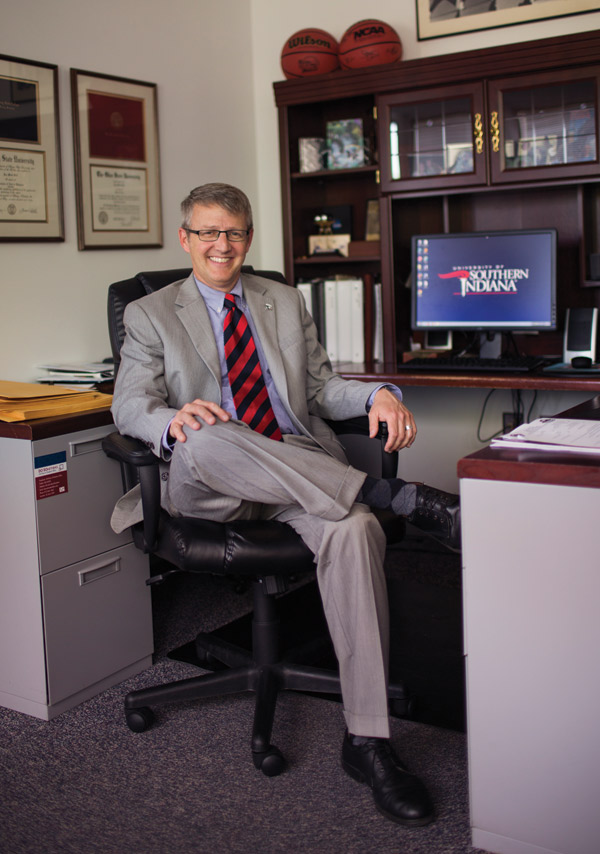 Job: Director of Athletics at the University of Southern Indiana

Recently selected to the Great Lakes Valley Conference Hall of Fame, former University of Southern Indiana Men’s Tennis Coach and current Director of Athletics Jon Mark Hall is nothing but humble. The Western Kentucky native says it’s the student-athletes who are responsible for the honor, and it’s those young men and women Hall continues to focus his attention on. Hall attended Murray State University in Murray, Kentucky, for his bachelor’s degree, and Ohio State University in Columbus, Ohio, for his master’s degree.

From your view as director of athletics, how have college sports changed in the last 10 years?

The landscape of intercollegiate athletics has changed a lot. At times, at our level (USI has Div. II athletics) it has become more of a business than in the past. The change has been greater at the Div. I level with all the schools switching conferences and how TV has become so involved in everything. It has trickled down some to our level where you are really trying to think of all the different ways you can create revenue, create buzz for your department, and the tough balance with that is not losing sight of what you’re doing that for. Especially at our level, you keep in mind the balance between academics and athletics.

You worked as both the assistant athletic director and the men’s tennis head coach at the same time. What was that experience like for you?
I was the assistant athletic director and right when I accepted that job, the men’s tennis coach at USI retired. They asked me to do it. I had a tennis background — I played in college. I really didn’t know if I wanted to do it because it wasn’t on my radar. The current athletic director at the time, Steve Newton, told me that he felt like if I could live a little bit in the coaches’ shoes it would help me become a better athletic administrator. I would know how it would feel to recruit, schedule, travel with the team.

How are you creating a buzz for the athletic department?
We are starting the process of renovating the Physical Activities Center — a $16 million project. It is going to be very important for us to figure out what we can do to put our student athletes and coaches in the position to succeed. These next couple years could change the way folks look at us. This facility is such a multi-purpose facility and it will continue to be that. When you come to our campus, our buildings are so new, vibrant, and inviting and this building really isn’t right now. This opportunity will give us a chance to get more people to campus for events — not just for athletics.

How will the new facility impact recruiting opportunities?
Student-athletes want to know where they are going to live and not just where they are going to play. We have a fair amount of student-athletes who are sport management and kinesiology majors and those students are in this building, too. They want to know what the weight room looks like, what the locker rooms look like, where the athletic trainers are, and what the training room looks like. Our facilities are OK, but now is the chance for us to make a splash and give us an opportunity to recruit at a higher level.

What are your current goals with USI?
We’ve really worked hard at developing a strong relationship with the Evansville Sports Corp. We’ve tried to bring as many collegiate athletic events to this community as possible. We’ve hosted the Div. II Elite Eight Men’s Basketball Championships, the GLVC basketball and baseball championships for multiple years, and will start a run of the NCAA cross country events (at Angel Mounds State Historic Site in Newburgh, Indiana). Our goal is to improve the quality of life here in Evansville. Our hope is that Evansville sees USI as a great partner.